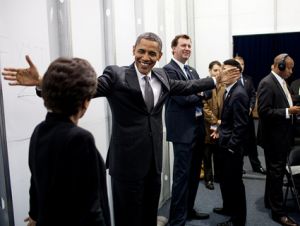 Ben Shapiro, author of a book about the corrupting influence of Sesame Street, had a fun little item at Big Hollywood over the weekend. It turns out that the Obama campaign has been sending surrogates to Europe to hold fundraisers. (Millions of American citizens live overseas because of work.) This is funny because, as Shapiro puts it, “Especially in the aftermath of the Supreme Court ruling that upholds Obama’s European-style healthcare plan, Obama’s hoping to cash in on like-minded folks abroad.”

Here, one might pause to note that, as The Daily‘s Dan Hirschorn reported, the Romney campaign is also holding fundraisers abroad. Mitt Romney sent two of his sons to Hong Kong, in communist China, to shake down American donors there. Romney himself is heading to London, which is located in England, where citizens are enrolled in something called the National Health Service. (Here are two Big Government stories about alleged euthanasia and confirmed “transgender art ‘diversity week'” at the National Health Service.) The Romney campaign is even thinking of holding a fundraiser in Israel, presumably to cash in on like-minded folks abroad who admire what Romney did to pave the way for Obama’s Israeli-style healthcare plan.

Shapiro, who writes that “Americans don’t believe that Obamacare is a triumph,” implies that the Obama campaign will be raising money from actual Europeans. That would be a flagrant violation of campaign finance laws, which mandate that all election funds come from American citizens. (If you’re actually curious about foreign money in American elections, I’d recommend my colleague Andy Kroll’s piece de resistance on dark money from the current issue of Mother Jones.) But the implication that Obama will be taking money from Europeans isn’t the wrongest part of Shapiro’s story. After the piece had circulated through the conservative blogosphere, it gained a (false) wrinkle: Obama himself would be in Paris—on the Fourth of July, no less! Blame the National Review‘s Andy McCarthy, who wrote as much on Saturday morning and, as of 10:39 P.M. on Sunday, still hadn’t issued a correction. One blogger goes so far as to calculate that Obama’s Paris junket will cost $2 million in flight costs alone.

The truth: Obama will spend the Fourth, his daughter Malia’s birthday, throwing a party on the White House lawn for military families.