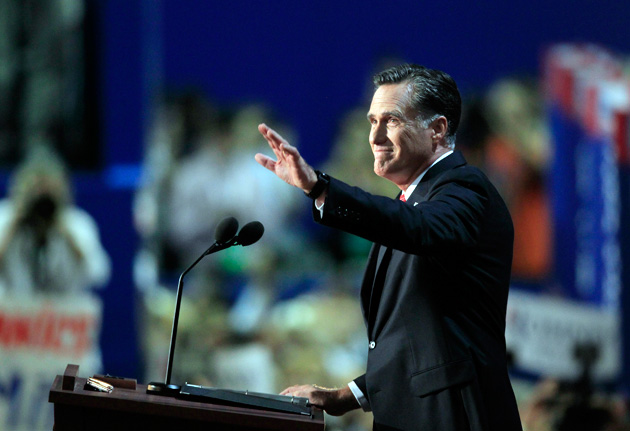 With the Republican convention in Tampa, Mitt Romney has launched the most ideological presidential campaign in recent history. At issue is not merely the current state of the economy and Romney’s ability to become the CEO-in-chief and perform a turnaround. Romney is waging a battle for the opportunity to conduct a conservative social experiment that would remake fundamentals of American society. But he neglected to mention that Thursday night during his climactic—though hardly soaring—acceptance speech.

The previous evening, his veep pick, Paul Ryan, married two ideas together when he wasn’t tossing out profoundly false talking points: The first is that Romney is a successful businessman who can revive the flagging economy and return the nation to greatness; the second is that voters are now living in an American gulag, where basic freedoms have been destroyed and sanctimonious central planners dictate citizens’ lives, smother initiative, and doom everyone to a life of entitlements and control. The first of these notions is upbeat and hopeful, addressing the immediate concerns of voters confronting economic challenges: Romney, the guy who looks like a president from Central Casting, is galloping in on a white horse to rescue you. The other is gloomy and of more concern to the arch-libertarians of the tea party and conservative movement: We are living in a place akin to the former East Germany and must break free of the chains.

Yet when Romney spoke to the convention on Thursday night, he only worked the first idea, sticking with a more standard (and less revealing) script. It was a grade-B endeavor, an uninteresting speech offering few ideas but containing the familiar Hallmarkian biography (good son, good husband, good dad, man of faith, good businessman) and all the expected rhetoric: lower taxes for all, repeal Obamacare, increase military spending, deride concern about global warming (“President Obama promised to begin to slow the rise of the oceans and heal the planet. My promise is to help you and your family.”). There was the usual hawkish talk about Iran, as Romney channeled his neocon advisers. Yet oddly, and perhaps scandalously, he did not once mention the war in Afghanistan or the tens of thousands of US troops serving there.

Romney did adopt a somewhat gentle approach to slamming his opponent. He noted that he had initially hoped that Obama would succeed as president (really?) but that now, after years of disappointment, Americans “deserve better” and a change in leadership is necessary to produce jobs, jobs, and jobs. Romney contended that his economic plan (details not included) would yield 12 million new jobs—but most economists figure that’s the amount of jobs that will be created in the next few years without Romney at the helm. And despite his more measured tone, Romney still portrayed Obama as a foe of business and religious freedom. (“He had almost no experience working in a business. Jobs to him are about government.”) Without hesitation, he hurled the campaign’s favorite falsehoods: Obama went on an apology tour; he raised middle-class taxes; and he slashed Medicare by $716 billion.

Here was Romney presenting a conservatism that could be palatable to in-the-middle undecided voters: The way out of the hole is to cut taxes and trim government. And citing his days at Bain Capital, he maintained that he knew how to juice up the economy. Obama, he said, is more interested in “attacking success.”

This was all pro forma—nothing revelatory or jazzy, and was a contrast to Ryan’s hardcore stylings of the previous night. Romney’s not-so-extreme language was designed to appeal to hard-pressed voters looking for a president who just might be able to do better than the current occupant of the White House.

Indeed, the Romney-Ryan message is two-tiered. Romney takes the middle road: We have to fix the economy, and I’m the suit who can do it. And Ryan takes the extreme one: We need a revolution, and I’m the visionary to lead it. They are talking to different audiences—Ryan ginning up the faithful who crave a reshaping of America, Romney trying to persuade undecideds they ought to hire a Mr. Fixit to deal with the immediate problem at hand.

Hours before Romney was to deliver his speech, I asked John Sununu, the ever-cantankerous former New Hampshire governor and White House chief of staff who is a close adviser to Romney, if Ryan’s speech was archly ideological and might hinder Romney’s effort to attract voters in the middle. He grunted, “That just shows how little you guys understand this country.”

Sununu seemed to be suggesting that the Romney crowd believes that Ryan’s message, the intellectual foundation of the campaign, can coexist easily with Romney’s hire-me-to-do-the-job argument. Perhaps. There’s no way to know until November. But their campaign certainly has established that this race is not only about Romney and Obama; it is a struggle over the nature of US society. In past campaign speeches, Romney has indeed made that point. He elected not to do so on Thursday night when speaking before the biggest audience he’s ever addressed as a candidate. He played it safe and down the middle. But with Ryan by his side, Romney, often chided for being too cautious and calculating, leaves Tampa the chief of a rather bold endeavor.