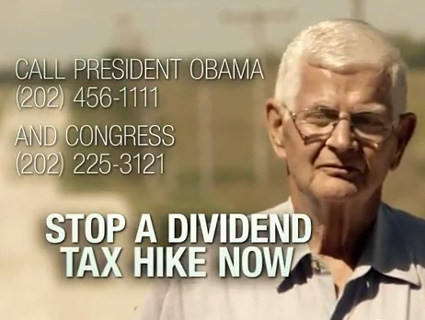 Since August, a dark-money group called Defend My Dividend has spent nearly $90,000 running ads on South Florida TV stations warning seniors about a looming increase in the tax rate on dividends.

“You worked hard, saved for retirement, and dividends are a big part of it,” says one of the ads, which Defend My Dividend has posted on YouTube. “But if President Obama and Congress don’t act this year, tax rates on dividends will spike, almost tripling in some cases.” Time is running out, the ad intones, as phone numbers for Obama and Congress appear on the screen.

The spot directs viewers to a website that gives few hints about the group behind the ads, which is described as a “national grassroots advocacy campaign.”

But there are indications the group is more astroturf than grassroots: The website is maintained by the Edison Electric Institute, a trade association for big dividend-paying electric companies.

According to television ad contracts obtained as part of ProPublica‘s Free the Files project, the contact person listed for some of the Florida ad buys was Stephanie Voyda, the institute’s director. On many contracts, the Alliance for Savings & Investment, a group that represents dividend-paying companies, is listed as a cobuyer with Defend My Dividend.

Voyda did not respond to repeated requests for comment from ProPublica. Neither did Jim McCrery, a lobbyist and former Louisiana representative who serves as the manager of the alliance.

Tax analysts say electric utilities and other companies are concerned that the tax change could damage their stock prices. Dividends have been taxed at 15 percent since 2003, but the tax will rise unless Congress acts before the end of the year to extend cuts made under President George W. Bush. The Alliance for Savings & Investment successfully lobbied against a hike in dividend taxes in 2010.

The Defend My Dividend ads have run in Miami and West Palm Beach, two markets known for their large population of retirees. Curtis Dubay, a senior policy analyst at the Heritage Foundation, a right-leaning think tank, said the strategy made sense.

“Florida has the highest proportion of retirees, who rely on dividends,” he said.

Ryan Rudominer, the Edison Electric Institute’s executive director for communications, confirmed that Defend My Dividend, which he said had been formed in 2008, was targeting seniors in Florida.

“Paid ads have been running on national cable television, in print publications, and in select regional markets,” he said in an email. “South Florida has a strong concentration of senior citizens and retirees that rely on dividend income and would be negatively impacted by the looming dividend tax hike.”

Asked about Defend My Dividend’s claim to be a grassroots campaign, Rudominer said the group had “generated hundreds of thousands of emails and phone calls from concerned citizens to their elected officials urging them to stop a dividend tax hike.”

It’s unclear how much the typical retiree would be affected if the Bush tax cuts are not extended. In that case, dividends would be taxed as ordinary income, said Roberton Williams, a senior fellow at the Tax Policy Center and a former tax analyst for the Congressional Budget Office.

In February, Obama proposed taxing dividends as regular income only for those who make at least $250,000 a year. Along with the 3.8 percent surtax on high earners in the health care law, dividends could be taxed as high as 43.4 percent for that subset of people—the source of the ad’s assertion that the dividend tax could triple.

“My guess is that the tax changes would disproportionately hit high-income individuals rather than older individuals,” Williams said.

Seniors who hold dividend-paying stocks in IRAs or 401(k)s wouldn’t be affected at all, he added, because dividends accrued in such accounts are already taxed as regular income when money is withdrawn.

Defend My Dividend’s ads are clearly aimed at seniors, however. They feature older couples prominently and warn that a tax hike will have the effect of “squeezing seniors and families.”

Edison Electric Institute, which is incorporated as a 501(c)(6) trade group and does not have to disclose its donors, has driven home similar messages about the potential tax change in other venues as well.

Its chairman, Lewis Hay III, who is also the executive chairman of NextEra Energy, a Florida power company, wrote an op-ed for the Wall Street Journal in July with the headline “The Tax Cliff Endangers Seniors.” Hay, McCrery and Sandy Callahan, the chief financial officer of TECO Energy, another Florida-based power company, have written similar op-eds promoting Defend My Dividend for several Florida newspapers in recent weeks. Hay did not respond to requests for an interview.