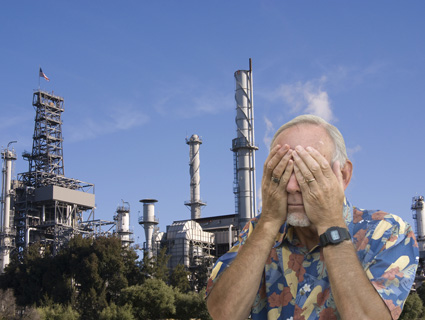 Climate-lovers are happy about some of the hawks elected on Tuesday. But they’re also cheering the unceremonious dismissal of several congressional climate villains. That includes four of the lawmakers that the League of Conservation Voters deemed the “Flat Earth Five” and spent $3 million to unseat:

1. Ann Marie Buerkle, a Republican from New York’s 24th district. In 2010, Buerkle unseated Democratic incumbent Dan Maffei. But in a rematch this year, Maffai came out on top. Buerkle was a major target for environmental groups, thanks to her comments in a 2010 debate that “a lot of the global warming myth has been exposed.” Cap and trade, she said, is a “tax on energy … based on some specious global warming. Whether or not there’s real global warming has not been determined.”

2. Francisco Canseco, a Republican from Texas’ 23rd district. Canseco lost to challenger Pete Gallego in a race that included fights over rare eyeless spiders and the dunes sagebrush lizard. Canseco was not happy when the League of Conservation Voters went after his climate denial, telling a Christian news site, “It is really counterproductive to have a debate about whether or not there is climate change … What we should be having is a debate about policies that are promoted and implemented in the name of climate change and that negatively impact opportunities for our citizens and kill jobs.”

3. Dan Lungren, a Republican from California’s 7th district. Lungren, a four-term incumbent, appears to have lost his reelection bid to Democrat Ami Bera, though he is not conceding yet. He’s wishy-washy on climate. “There is no doubt that there is global change, climate change,” he said in a September debate. “The question is who causes it and is it caused predominantly by human activity.”

4. Joe Walsh, a Republican from Illinois’ 8th district. Walsh lost to Democrat and combat veteran Tammy Duckworth on Tuesday night, after a race that got pretty ugly. LCV targeted Walsh over his comments like “man’s potential role in global warming has not been definitively determined.” He has also said he thinks the government’s only role in climate change should be to fund more science (which he would likely continue to ignore), and he thinks the Environmental Protection Agency “ought to be scrapped.”

The fifth member of the “Flat Earth Five,” Republican Dan Benishek of Michigan’s 1st district, won by a narrow margin. Benishek, a physician who took office in 2011, says he’s not really sure about this whole climate change thing. “I’m not sure how significant global warming is,” he said at a debate last month. “You have to be very skeptical of science, OK?”

To be clear, there are still plenty of climate deniers in the House—these four just happen to be some of the loudest. “It’s not just that these guys are deniers, but they’re vocal in leading the charge against action on global warming,” said Navin Nayak, LCV’s senior vice president for campaigns. “The point of [the campaign] was to send a message. We took five races that were competitive and put real money behind trying to beat these guys.”