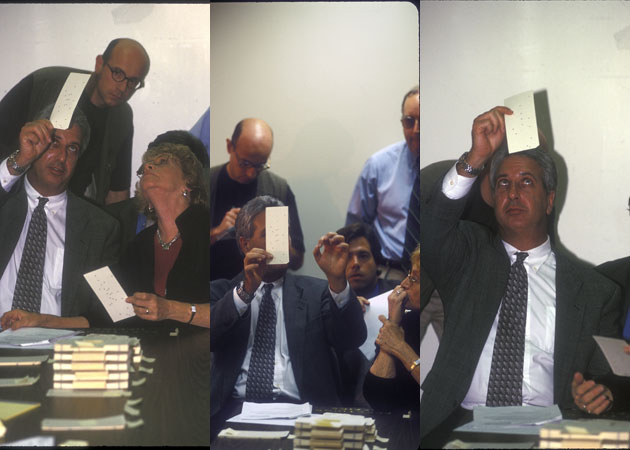 With the 2012 presidential race Xanax-poppingly close, political observers have been musing on various nightmarish outcomes, including a recount scenario like Florida’s in 2000, when hanging chads and butterfly ballots ultimately gave way to a George W. Bush presidency delivered by the Supreme Court. So what are the Obama and Romney campaigns prepared to do in the event of another razor-thin result subject to dispute, perhaps this time in Ohio?

Both political parties have been ramping up their legal teams over the past 12 years. In an interview with the Daily Beast in July, former Obama Chief of Staff William Daley, who chaired Al Gore’s 2000 campaign, said the most notable organizational mistake by the Gore team in Florida was not having legal and media teams on the ground faster. It’s a different story now: The Obama and Romney campaigns have armies of lawyers and volunteers ready to monitor voting places and launch challenges if they see anything suspicious. “There has been steady progression in terms of the level of preparation, planning, and training with every election cycle since 2000,” says Kendall Coffey, a high-profile Florida attorney who also worked on Gore’s campaign and is part of the Democrats’ legal team this year.

But there could be a new problem that wasn’t present in 2000: If any recount does occur, there’s much potential for confusion due to restrictive voter ID laws engineered by the GOP. “The administration of new controversial voting laws in the midst of a recount could make the recount that much more complicated, difficult, drawn out, litigated, and scrutinized,” says Jennie Bowser, an expert in election law and procedures at the National Conference of State Legislatures. The implementation of these laws could lead to the use of more provisional ballots, which are given to voters in disputed circumstances, and only counted in the event of a close outcome. Handling these could become the sticking point of a 2012 recount. If more provisional ballots are put in play, there will be more votes for each side to argue over, with each team of attorneys, no doubt, questioning those provisional ballots that they suspect contain votes for the other side.

“Most of the time in most elections the number of provisional ballots wouldn’t matter,” says Jeffrey Robinson, a former Gore attorney who now works at the NAACP Legal Defense and Educational Fund. But this year “the level of scrutiny will be extreme…How provisional ballots are handled could be important in a close state,” he says.

Both campaigns, as well as the DNC and RNC, have declined to comment on specific preparations for a recount, but “they’re preparing on both sides like it’s going to happen,” says Joseph Sandler, who was general counsel of the DNC for many years and now counsel for a number of state Democratic parties. Both sides have thousands of volunteers and lawyers on the ground around the country to deal with potential Election Day problems, but neither will disclose the number of lawyers they have on hand to deal with post-election disputes.

Republicans have amassed $5.29 million recount fund, while Democrats only have some $54,000.

Back in 2000, “the biggest surprise of all was realizing that the electoral system was not designed not to have 100 percent certainty,” says attorney Manuel Iglesias, who is on the GOP’s Florida legal team this year. The controversy gave birth to a flurry of laws around election administration, including laws attempting to improve the mechanics of voting. 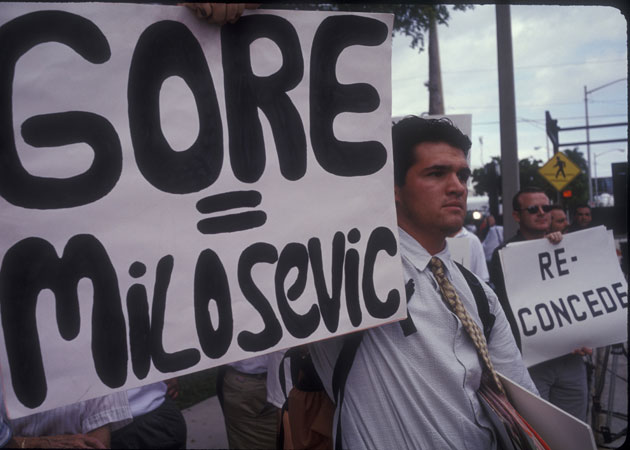 In Miami-Dade County, Iglesias says new machines will notify voters if they accidentally cast an “over-vote,” that is, vote for more than one candidate for a particular office. Still, other problems are cropping up this year, including in…yes, Palm Beach County. Ballot typos this time.

If there is a recount (or two or three), Robinson says that managing public messaging becomes crucial. (Gore emerged from the mess in 2000 perceived as a “whiner” over his own loss, Robinson recalls.) Robinson says the emphasis must be on making sure everyone’s vote counts: “One of the lessons from 2000 is that from the perspective of the public and the law, an inclusive strategy, as opposed to strategy that seeks to count ballots you like, is on stronger legal footing.”

At the same time, Dems should not be softies, says Dennis Newman, who was lead counsel for the Gore campaign in Palm Beach County. He emphasized that they need to hold their legal ground when disputes arise. As Florida election officials were counting overseas military ballots in 2000, the Bush campaign challenged their invalidation of ballots with technical violations. Democrats insisted Florida election officials stick to the law that invalidated them, but after the Bush camp painted Dems as trying to disenfranchise the military, vice presidential candidate Joe Lieberman went on Meet the Press and backed the GOP position. Election officials ended up allowing ballots that had already been rejected, which many think could have cost Gore the election.

Every election, “we always end up with a recount somewhere,” says Bowser, usually with a race for governor or state legislator. The likelihood of another presidential race coming down to disputed results in a swing state is pretty small. But, Bowser adds, “if Ohio has to do a recount, I foresee myself not sleeping until March.”