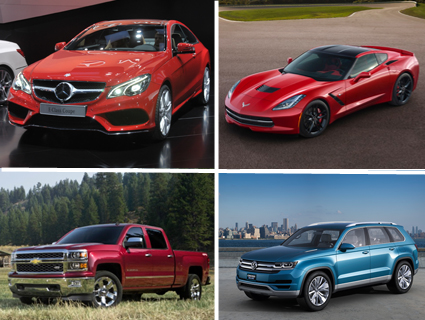 Alan Baum has to shout into the phone for me to hear him over the cacophony of the Detroit Auto Show, which opened Monday. Around him, thousands of journalists swarm from one new car to the next, lights flash, DJs spin, and the cream of the world’s automotive crop glistens. “A lot of show and not a lot of substance,” Baum, an industry analyst, jokes.

Just to look around at the “performance” cars on display here, from hulking pickups to lightning-fast sports cars, you might not be able to tell that this is the first major car show in Detroit since the introduction last fall of President Obama’s new fuel efficiency standards, which will require all cars and light-duty trucks to operate at 54.5 miles per gallon by 2025, nearly doubling current requirements. The  administration predicts that this move will save Americans nearly $2 trillion at the pump. The cars below— featured this week in Detroit—are already taking steps in that direction.

While it’s true that the Detroit show has its of share super-green cars (like the futuristic Tesla Model X and a marked-down version of the classic Nissan Leaf), Baum says the real progress is on prioritizing fuel efficiency on updates to familiar models that used to be all about style or power. Fuel efficiency standards and record-high gas prices be damned, in Detroit the floor is still packed with muscle-bound models, but a recent analysis by Baum’s firm found that from 2009 to 2013 the number of popular vehicles with improved fuel efficiency more than doubled, from 28 to 61, of which only a third are tiny subcompacts.

“Automakers are supportive of fuel efficiency requirements because that’s what consumers want anyway,” Baum says, adding that as major manufacturers like Ford invest more heavily in highly efficient vehicles, they acquire a perverse fear of falling gas prices, which would diminish the economic incentive for consumers to spend more on an efficient car.

Still, history shows that car manufacturers need a regulatory boost to keep pushing on the fuel efficiency front, says Don Anair, an analyst with the Union of Concerned Scientists. After Congress passed the first federal fuel economy standards in 1975, efficiency innovation stagnated until 2007, when new legislation upped the ante. In 2010, the Obama administration set higher standards for the immediate future, and finally last fall set the historic long-term goals that automakers are now striving to reach; already, over the last few years emissions from cars have dropped. “The effect of the standards is to raise the overall effort,” Anair says.

The American auto industry is playing catch-up with Europe on diesel engines, featured on several new models in Detroit. Diesel engines are up to 35 percent more efficient than their gasoline counterparts, although some studies raise a red flag with the global warming potential of the black carbon diesel engines emit. But Anair thinks fuel efficiency is likely to become the automotive trump card: “That’s front and center in consumers’ minds.”