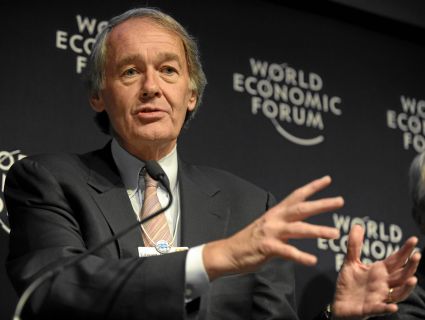 Environmental groups are starting the push to get Rep. Ed Markey (D-Mass.) elected to fill the vacant Senate seat should John Kerry be confirmed as the next secretary of state. Green advocates are convinced that a Sen. Markey would be their dream come true—no matter who the other contenders for the seat turn out to be.

Having represented the state since 1976, Markey has certainly had plenty of time to advance, but during most of the past four decades, there have been few opportunities for him to the leap to the upper chamber. “For so long the Senate seats were occupied so well by Sens. Kennedy and Kerry,” said Melinda Pierce, deputy national campaign director for the Sierra Club. “[Markey] was forced to bide his time in the House, and yet created a real leadership positions for himself there.”

Markey took leadership roles on a number of environmental issues over the years, from crafting new fuel economy standards to proposing renewable energy mandates to—perhaps most notably—coauthoring the 2009 American Clean Energy and Security Act, a cap-and-trade package aimed at dealing with climate-heating emissions. Water, air, nuclear safety, the BP oil spill—Markey has been all over all of them. When then-House Speaker Nancy Pelosi decided to create a special committee on global warming in 2007, she tapped Markey to lead it. Markey ran the Select Committee on Energy Independence and Global Warming until Republicans took over the House and dissolved it in 2011. Since then, he’s served as the top Democrat on the Natural Resources Committee.

And it’s not just Markey’s voting and leadership record that environmental groups like—it’s also his rhetorical flourish. He’s known for arguing adamantly and often for action, usually with colorful metaphors. “The planet is running a fever,” said Markey at a Climate Desk Live event cosponsored by Mother Jones last month. “There are no emergency rooms for planets. We have to use preventative care.”

“If there was an environmental hall of fame, Markey would be in there,” said Heather Taylor, director of the Natural Resources Defense Council Action Fund, the group’s political arm.

“He just stands head and shoulders above not just the Massachusetts delegation, but all of Congress,” gushed one green group’s senior vice president.

Which is why environmental groups are supporting his campaign even before other Democrats have formally declared whether or not they plan to enter the primary. Last Friday, the League of Conservation Voters—the biggest electoral force among the environmental groups—announced its endorsement of Markey, calling him an “environmental hero.” The LCV has started raising money for Markey’s campaign through its website, bringing in just over $30,000 since last Friday. The LCV is the heaviest hitter of the environmental groups; it spent $14 million on the 2012 election. With just the Massachusetts race to focus on this year, the group expects to direct significant support to Markey.

“He just stands head and shoulders above not just the Massachusetts delegation, but all of Congress,” gushed Navin Nayak, senior vice president of campaigns at the LCV. “He’s just the kind of guy you have to stand up with.”

The NRDC Action Fund’s Taylor said the group does not do many formal endorsements but has already started reaching out to its network of donors to ask them to support Markey. That NRDC supporters gave $3.9 million directly to candidates in the 2012 election bodes well for their fundraising effort for Markey’s campaign.

Sierra Club is a membership-based organization and said that it will have to go through a formal process to determine when it might endorse Markey—and that won’t begin until the special election is actually scheduled. (Right now, it will most likely be held in September.)

If Scott Brown is the Republican candidate—which remains unclear at this point—the state’s environmentalists already have their knives sharpened. Last November’s election saw a number of ads critical of Brown’s environmental voting record, like this one from the LCV and another from the League of Women Voters.

Markey has also drawn early support from key Democratic players, including retiring Rep. Barney Frank, who is expected to fill Kerry’s seat in the interim, and the Democratic Senatorial Campaign Committee. Markey is the only candidate to announce his intention to run so far, though other House members have indicated interest. Rep. Stephen Lynch (D-Mass.) is still considering throwing his hat in the ring, while Rep. Michael Capuano recently announced that he was not going to enter the race.

Most signs so far point to Markey as the candidate, a prospect enviros are pleased with. “It’s finally Ed Markey’s time,” said Sierra Club’s Pierce.