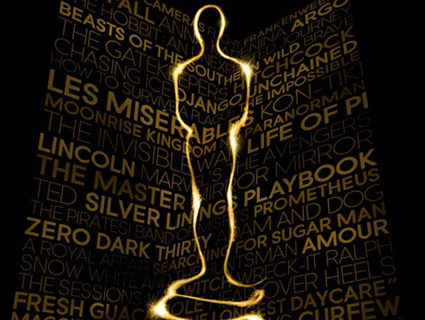 Much like Hanukkah, the White House Correspondents’ Dinner, or North Korea’s annual gymnastics festival, the Oscars come only once a year.

And if you are one of the tens of millions of viewers who decided to forego another rerun of The Mentalist or Betty White’s Off Their Rockers, and instead watch a bloated and self-aggrandizing Oscar telecast, here’s a supplement to tonight’s viewing. This will not be a drinking game, a score card, an Oscar bingo card, a running count of how many awards Meryl Streep has won this evening whether or not she’s been nominated for anything, or my self-indulgent list of predictions or favorite Oscar snubs.

Instead, here are a few things you should know (that you probably didn’t, or had at least forgotten) about the 85th Academy Awards:

1. The state department has taken sides this year.

Good luck @benaffleck and #Argo at the Oscars. Nice seeing @statedept & our Foreign Service on the big screen.-JK

That’s newly minted Secretary of State John Kerry signing an official departmental tweet the day before the Oscar ceremony. It seems as though the Department of State is not on Team Les Miz or Team Beasts of the Southern Wild.

Did you know @benaffleck filmed scenes from #Oscar-nominated #Argo in the @statedept? See the crew in our lobby: flic.kr/p/dX9vQ4

2. The director of the 2013 Academy Awards is also famous for screaming profanity on CNN.

Speaking of John Kerry…Don Mischer, who is directing the Oscar broadcast for the third time in a row, is one of the most sought-after producers and directors of live television events. His résumé includes Olympic opening ceremonies, Prince‘s Super Bowl halftime show, this Taylor Swift documentary, and We Are One: The Obama Inaugural Celebration at the Lincoln Memorial.

He is also famous for loudly swearing on live television while producing the 2004 Democratic National Convention. Following candidate Kerry’s acceptance speech, the grand arena balloon drop didn’t go according to plan: As many as 100,000 balloons failed to fall from the ceiling on cue. CNN aired live a long audio clip of Mischer yelling about confetti and balloons, as Van Halen’s “Dreams” blasted on the loudspeakers. This tirade climaxed with a frustrated, “WHAT THE FUCK ARE YOU GUYS DOING UP THERE?!?!” which was heard by many of the 4 million viewers watching from home. (The money quote is at the 1:49 mark of the video below.)

3. The host of this year’s Oscars was nearly killed by Al Qaeda.

Seth MacFarlane, Ted director and Family Guy creator, is hosting the show tonight. Both he and future Ted star (and would-be terrorist-puncher) Mark Wahlberg were scheduled to fly on the American Airlines flight that crashed into the North Tower of the World Trade Center. Wahlberg ended up flying on a different flight, and MacFarlane didn’t board on account of his travel agent giving him the wrong departure time (also, he was hungover and overslept).

Here he is discussing this with Larry King:

The Longest Daycare is one of the films up for this year’s Best Animated Short Film. It stars Maggie Simpson from The Simpsons in a dialogue-free 3D short with music by Oscar-winning German composer Hans Zimmer.

This Oscar-nominated short is only Maggie Simpson’s latest adventure at the Ayn Rand School For Tots, the school named for the ultra-libertarian writer. In the 1992 Simpsons episode “A Streetcar Named Marge,” Maggie is enrolled in the same (fictitious) school. On a related note, Maggie has actually played an Ayn Rand character (a version of The Fountainhead‘s Howard Roark) in the 2009 anthology episode “Four Great Women and a Manicure.” In that episode, the typically mute Maggie is voiced by Jodie Foster while reciting a big, Randian monologue taken from the courtroom scene at the end of The Fountainhead.

Now, watch the The Longest Daycare here. It’s four and a half minutes well spent:

5. Nate Silver has weighed in.

The New York Times statistics big shot and presidential-election prognosticator Nate Silver is yet again trying his hand at predicting the Oscar-night outcomes. He also crunched the data in 2009 and 2011, and has a success rate of 75 percent, which is, in his words, “not bad, but also not good enough to suggest that there is any magic formula for this.”

Here is his Best Picture pick, in convenient bar-chart format courtesy of his FiveThirtyEight blog (click here for Silver’s predictions in other categories):

6. The master chef feeding the rich and famous

Celebrity chef—and “Chef Smurf” from the 2011 film adaptation of The Smurfs—Wolfgang Puck is cooking for the expected 1,600 attendees at the official Oscar after-party, the Governors Ball. This marks the 19th consecutive time Puck done this. According to Puck, chicken pot pie will indeed be served at the party: “We have several of the Academy members, who have said, ‘I don’t care what George Clooney or Steven Spielberg eats, I want my chicken pot pie,'” Puck told reporters at a menu-preview event. Other culinary delights include chocolate candy molded in the shape of Oscar statues, smoked salmon in the shape of Oscars, and lamb shank.

Here’s video of Puck on The Ellen DeGeneres Show this past week. He treats Ellen to a demonstration of vegan cooking:

7. How much does your average Oscar statuette weigh?

Eight and a half pounds: Just a little more than an eight-week-old Labrador puppy, or, according to Ray in Jerry Maguire, a human head.

Here’s a statuette fact-sheet from the Academy of Motion Picture Arts and Sciences:

8. The current president of the Academy of Motion Pictures Arts & Sciences goes by the name “Hawk Koch.”

Nothing much else to say here. It’s just an awesome name, that’s all. Also, he used to be a road manager in the 1960s for the Supremes and the Dave Clark Five.

Here’s a photo of the man: 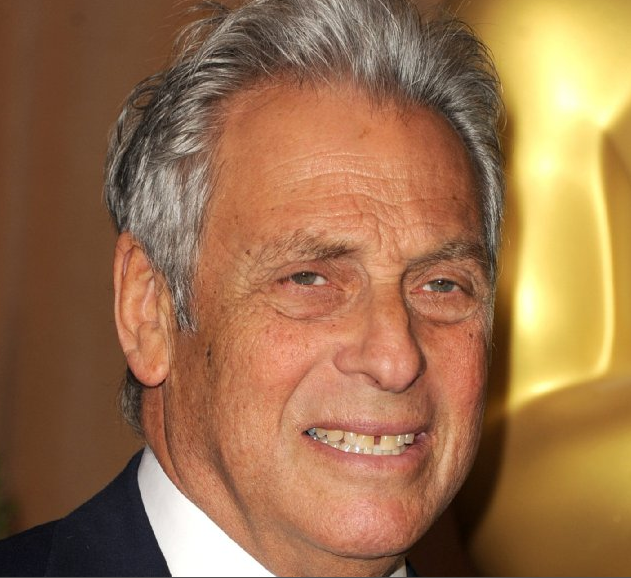 Via IMDB, by Kevin Winter

Check back for some Oscar live-blogging later today. I’ll post my thoughts below, and I pray you get a degree of enjoyment out of them:

8:58 p.m. ET: Christoph Waltz wins Best Supporting Actor for Quentin Tarantino’s Django Unchained. Fun fact: While he was preparing for his role in the film, the 56-year-old actor injured himself by falling off a horse. The more you know.

9:05: The men of The Avengers reunite onstage to introduce the nominees for cinematography and visual effects. They make awkward jokes, much like pretty much everyone else who presents awards at Oscar ceremonies. Claudio Miranda wins for Ang Lee’s Life of Pi. Here’s a photo of the award-winning Chilean cinematographer: 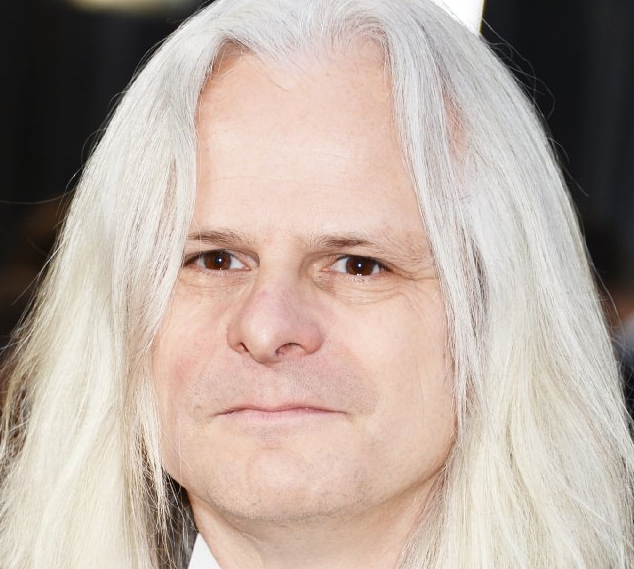 Via IMDB, by Jeff Kravitz

9:20: Les Misérables wins its first award of the night: For makeup and hair.

9:51: Amour wins the award for Best Foreign Language Film. It’s the second movie from Austria to win the award.

9:56: A tribute to Oscar-winning musical films kicks off with Catherine Zeta-Jones reprising her role as showgirl Velma Kelly in the 2002 Oscar winner Chicago. In 2012, Zeta-Jones starred in the film adaptation of the jukebox musical Rock of Ages, in which she also did a kick-ass job belting out tunes.

Next up, Jennifer Hudson singing “And I Am Telling You I’m Not Going” from Dreamgirls. Then, the main cast from Les Misérables (including Anne Hathaway, Russell Crowe, Hugh Jackman, etc.) sings “One Day More.” Here’s my favorite “version” of “One Day More,” courtesy of…

Oh, right: They do do this occasionally.

10:25: As a surprise to absolutely no one who saw Les Miz, Anne Hathaway wins Best Supporting Actress, beating out the likes of Sally Field (Lincoln) and Amy Adams (The Master).

10:38: Adele singing the theme for Oscar-nominated 2012 James Bond movie Skyfall. Initial reports suggest a good time was had by all.

10:50: Oscar honoree D. A. Pennebaker’s filmography, which includes the 1973 concert film Ziggy Stardust and the Spiders from Mars.

11:35: Ang Lee wins Best Director for Life of Pi. With how well Life of Pi  doing tonight, I’m honestly starting to think the Academy is doing this to make up for failing to give Lee’s 2005 Brokeback Mountain the Best Picture award. Stay tuned to see if this carries over to the Best Picture category this time around…

11:51: Daniel Day-Lewis wins Best Actor for Lincoln. Dedicates his award to Abraham Lincoln and his mom, among others. Also, DDL cracked some epic jokes about Meryl Streep being Spielberg’s original pick to portray Honest Abe.

12:00: “I want to thank Canada!”—Ben Affleck, during his victory speech. He also thanks his wife Jennifer Garner and others.