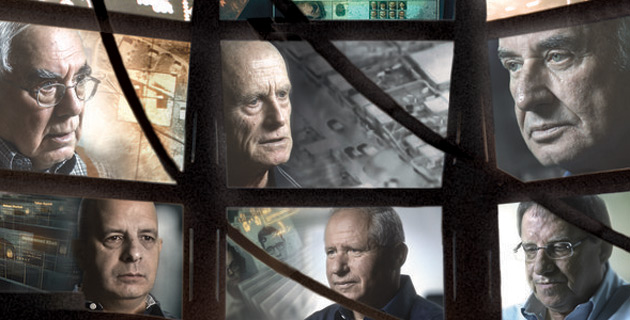 “What’s unnatural is the power you have to take three people, terrorists, and take their lives in an instant,” says Yuval Diskin, the 12th director of the Shin Bet, Israel’s internal security service, during the opening sequence of The Gatekeepers. His blunt testimony sets the grave and mournful tone that defines the rest of this illuminating and devastating film.

The Oscar-nominated documentary, directed by Israeli filmmaker Dror Moreh, uses interviews with all six living ex-directors of the Shin Bet to paint a stark portrait of the agency and how it figures into the Jewish state’s past, present, and future. For those who haven’t heard of this security service, here are a couple lines from my crib sheet: Imagine the FBI, only tremendously more efficient, brutal, and terrifying. Now, imagine if the war on terror were half a century old, and if we had drone strikes and black sites in Florida and Montana.

That’s what the Shin Bet is like for Israelis.

It’s a juggernaut of counterterrorism and intel gathering. Shin Bet directors answer directly to the prime minister. The agency’s greatest blunder was their failure to protect Yitzhak Rabin, the Israeli leader who came closest to making peace with the Palestinians, from being murdered by a right-wing Israeli terrorist.

“I didn’t want any more live terrorists in court,” explains Avraham Shalom, who led the organization from 1980 to 1986. “In the war against terror, forget about morality.” He’s talking about the agency doctrine of targeted assassination against Islamic militants. (For what it’s worth, Shalom now looks like your average adorable grandpa in dark-red suspenders, and yes, he has blown up his fair share of people.)

It goes without saying that these men have street cred. None of them has anything to prove when it comes to battling Muslim extremism or waging war on violent anti-Semitism. Avraham Shalom was even part of the team that captured Adolf Eichmann and flew his Nazi ass back to Israel to stand trial in 1960. These are guys who know perhaps better than anybody else what it means to orchestrate the ruthless killing of jihadists and Hamas terrorists.

And yet not one of them could make it through a Senate confirmation hearing. In fact, the most fascinating thing about The Gatekeepers is that so much of what these hardened agency dons say about the Israeli-Palestinian crisis is completely interchangeable with what many American pundits and politicians might assail as anti-Semitic rhetoric.

Here are six examples of things said in the film that could get you pilloried in American politics:

1. “Talk to everyone, even if they answer rudely. So that includes even Ahmadinejad, [Islamic Jihad, Hamas], whoever. I’m always for it. In the State of Israel, it’s too great a luxury not to speak with our enemies…Even if [the] response is insolent, I’m in favor of continuing. There is no alternative. It’s in the nature of the professional intelligence man to talk to everyone. That’s how you get to the bottom of things. I find out that he doesn’t eat glass and he sees that I don’t drink oil.”—Avraham Shalom (1980-86), on negotiating with the enemy.

2. “We are making the lives of millions [of Palestinians] unbearable, into prolonged human suffering, [and] it kills me.”—Carmi Gillon (1994-96).

3. “We’ve become cruel. To ourselves as well, but mainly to the occupied population.” Our army has become “a brutal occupation force, similar to the Germans in World War II. Similar, not identical.”—Shalom, who clarifies that he is referring to the Nazis’ persecution of non-Jewish minorities.

4. “We don’t realize that we face a frustrating situation in which we win every battle, but we lose the war.”—Ami Ayalon (1996–2000), regarding the wisdom of Israel’s counterterrorism measures.

5. “To them, I was the terrorist.… One man’s terrorist is another man freedom fighter.”—Yuval Diskin (2005-11), candidly discussing the very first time he considered his profession from a Palestinian perspective.

6. “We are taking very sure and measured steps to a point where the State of Israel will not be a democracy or a home for the Jewish people.”—Ayalon

But the film’s contribution to any political discussion on the topic goes way beyond its quotable shock value. It’s the culmination of a personal saga for these six warriors, packaged in one raw, brilliantly paced film with stunning visuals. “After retiring from this job, you become a bit of a leftist,” Yaakov Peri, who ran the Shin Bet during the First Intifada, says with a sad smirk. The narrative unfolds as a modern tragedy where the characters’ career highs are forever marred by a sense that they’ve retired only to become Cassandras. And for all their tactical successes on the battlefield, they see an Israel poised to lose the war if it continues to give up on peace.

Check out the trailer below:

The Gatekeepers gets a wider release on Friday, February 22. The film is rated PG-13 for violent content including disturbing images. Click here for local showtimes and tickets.

To listen to the weekly movie and pop-culture podcast that Asawin cohosts with ThinkProgress critic Alyssa Rosenberg, click here.