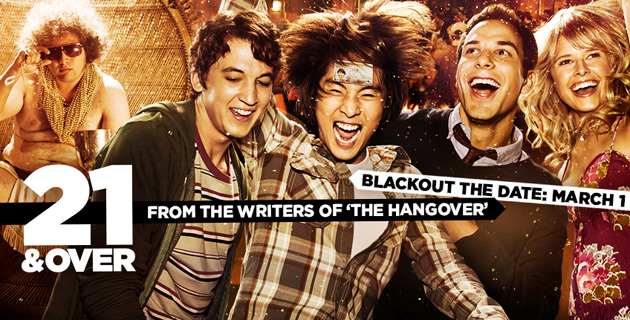 21 and Over
Relativity Media
93 minutes

The premise of 21 and Over is easy to grasp: Drunk Chinese-American college kid turns 21, and his two closest high school chums take him out for a raucous night on the town, during which he nearly reaches the point of horrendous alcohol poisoning. There are sorority girls and dick jokes aplenty. Hilarity theoretically ensues.

The film is the latest Hangover knock-off; it was written and directed by the same guys who wrote The Hangover. The movie stars Skylar Astin (the anti-bro from Pitch Perfect), Sarah Wright (Jerry’s daughter from Parks and Recreation), Miles Teller (this guy), and Justin Chon, a Korean-American actor who is passed out for most of the movie and is thus reduced to a glorified ethnic prop.

It’s the comedy-film equivalent of an empty calorie. It’s inexcusably tiresome, and you’ve seen the same movie at least eight dozen times in the past three years. But unlike most movies about hormonal drunkards, this one is unique in the sense that it was at the center of a human rights controversy.

Yep. Here’s an excerpt from an AP story from October 2011:

Rights activists have criticized a Hollywood studio for filming a buddy comedy in an eastern Chinese city where a blind, self-taught activist lawyer is being held under house arrest and reportedly beaten.

Relativity Media is shooting part of the comedy 21 and Over in Linyi, a city in Shandong province where the activist Chen Guangcheng‘s village is located. Authorities have turned Chen’s village of Dongshigu into a hostile, no-go zone and activists, foreign diplomats and reporters have been turned back, threatened and had stones thrown at them by men patrolling the village…Relativity declined comment but said in a press release that filming in Linyi began last Wednesday. In the release, Linyi’s top Communist Party official Zhang Shajun is quoted as calling Relativity’s chief executive Ryan Kavanaugh a “good friend” while Relativity’s Co-President Tucker Tooley describes Linyi as an “amazing” place.

(Chen Guangcheng is the blind Chinese civil rights and anti-poverty activist who gained international fame for his work documenting the Chinese government’s policy of forced late-term abortions and sterilization. He was arbitrarily detained in August 2005 and escaped house arrest in April 2012. He also looks like a fantastic Grand Theft Auto character.)

Relativity Media (a studio previously involved in films like Bridesmaids and Shark Night 3D) caught the ire of a lot of Chinese human rights campaigners and pissed off their allies in the West. “Picking Linyi as a film location is probably not a good idea, but signing a deal with [Zhang Shajun] a person who is directly responsible for one of [the] most egregious and cruel abuses of a human rights defender in China is really beyond the pale,” Nicholas Bequelin, senior researcher in the Asia Division of Human Rights Watch, told TheWrap.

21 and Over was the first film made under Relativity’s Chinese co-production venture. The decision to film in the city in Eastern China was a result of Relativity’s deal with Chinese authorities: In order to distribute in the People’s Republic’s hugely profitable market, the studio was required to produce an alternate cut of the film specifically for Chinese theaters. The Chinese version is a cautionary tale; it changes the main character to a Chinese native who travels to an American college campus as an exchange student, becomes ensnared in a world of objectionable youthful dissipation, and then returns to China having learned his lesson. (The filmmakers’ Chinese “liaison” had creative input.)

The United States looks bad, and Chinese moviegoers presumably get to have a nationalistic chuckle along with their cultural propaganda.

21 and Over was released the same week that retired NBA basketball star Dennis Rodman took a four-day trip to North Korea and ended up befriending totalitarian dictator Kim Jong Un, whom Rodman calls “an awesome kid” who is a “very honest” and devoted family man who is beloved by his countrymen and by Dennis Rodman. Fun facts.

Now here’s a trailer for the miserably unfunny waste of time that human rights advocates also don’t like:

21 and Over gets a wide release on Friday, March 1. The film is rated R for crude and sexual content, and crimes against humanity. Click here for local showtimes and tickets.