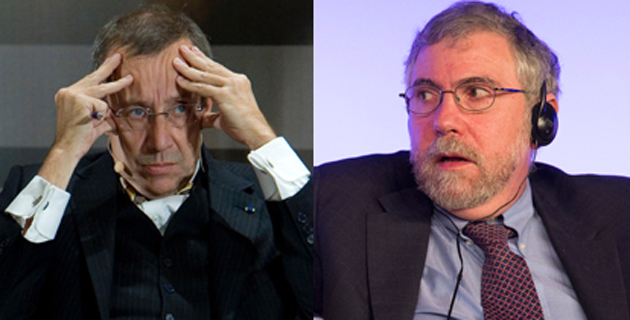 There is a new European musical production, sung and performed in soaring operatic style, that tells the true story of the June internet war between Paul Krugman, the noted Keynesian economist, and Toomas Hendrik Ilves, the president of Estonia. The first shot rang out when Krugman published a blog post titled “Estonian Rhapsody” criticizing the Baltic state’s austerity measures. Later that day, Ilves, a national figurehead who commands no real executive power, retaliated by opening up a salvo of indignant and sometimes vulgar tweets, decrying Krugman as ignorant, “smug, overbearing & patronizing.” 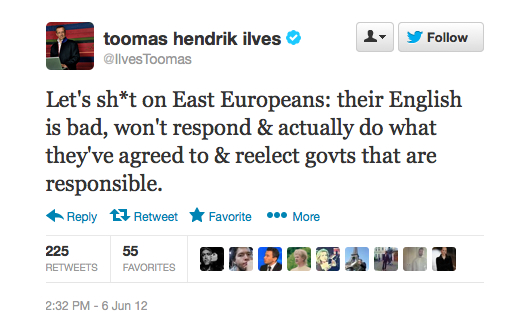 Naturally, someone would have to see this and think of it as musical-theater gold: “I couldn’t avoid the tweets,” Scott Diel, an Estonia-based American writer and lyricist for the show, tells me. “They just sort of recommended themselves.”

This is not the Onion. It’s the true story behind an original production that debuted Sunday night to a packed house at the historic House of the Brotherhood of Black Heads in Tallinn, Estonia, as part of the Estonian Music Days festival. A subsequent performance is in the works for the Estonia business conference Pärnu Konverentsid in the fall, and for a performance by Sinfonietta Riga in Latvia on October 18. The piece, titled Nostra Culpa, which means “our fault” in Latin (the expression was used in one of Ilves’ angry and sarcastic tweets), isn’t satirical, does not stake out a partisan position, and is not particularly critical of either Krugman or Ilves.

When news first broke in January that a musical showcase based on the semi-epic Krugman-Ilves feud was brewing, the production quickly made headlines, virtually all of which heralded a quirky, offbeat new “opera.” But the work isn’t actually an opera; it’s a cantata constructed as two movements. “The piece is angular; it’s quite destructive,” says Eugene Birman, the show’s Latvian composer, who studied economics at Columbia University and music at the Juilliard School. “The music in the first movement doubles as a representation of the shattering of the world during the [2008] financial crisis.”

Diel first approached Birman with the concept months ago. The Krugman-Ilves spat had left a lasting impression on Estonian pop culture, and was fresh in Diel’s mind—right around the time Birman was granted a commission to create a short operatic piece for the Estonian Music Days festival. “I asked Eugene, who I knew had a big enough sense of humor to take on this topic,” Diel says. “I knew he had previously written an opera about an ATM machine—a work performed in France. So I asked him, ‘What about a libretto based on the austerity/stimulus disagreement?'”

The lyrics in the first movement of Nostra Culpa paraphrase Krugman’s blog post, while the second movement quotes Ilves’ Twitter feed almost verbatim. The 16-minute piece was conceived as a one-woman show; both characters—Ilves and Krugman—are played by female Estonian singer Iris Oja. (Krugman and the president of Estonia did not respond to requests for comment.) And though both men were invited to the premiere, according to Diel, neither was in attendance (however, Birman tells me that Ilves’ son and the American ambassador to Estonia were in the audience). “[If Ilves and Krugman had both shown up], I wouldn’t know how to seat them,” Birman says. “Would they need to be far apart, or would I seat them together for some reconciliation.”

And in case you weren’t actually able to make it to Estonia for the premiere, here’s a recording of the performance that Birman provided to Mother Jones:

And here’s an sound clip of a rehearsal last week with the orchestra, conductor Risto Joost, Oja, and Birman and Diel. This excerpt is from the second movement of Nostra Culpa:

And here’s the full set of lyrics for both movements, also provided to Mother Jones by Birman:

In a world where professional composers are now writing operas on subjects like the life of deceased Playboy centerfold Anna Nicole Smith, the source material for Nostra Culpa might still seem unorthodox—and oddly specific—to the casual observer. But the show’s creators insist that their chosen subject matter was never a gimmick; in fact, they view “Krugman Vs. Ilves” as perfectly suited for a full-on operatic treatment: “Nobody I know looks to Twitter and thinks they’re going to scour [millions of Tweets] and find something really beautiful,” Birman says. “But the truth is that Twitter can have world-changing implications. And when writing an opera or cantata, nowhere is it written that your work must be based on high poetry or classical literature.”

And depending on how well Nostra Culpa is received, Birman and Diel claim they might expand the piece into a full-length, three-hour opera focusing on various facets of global financial meltdown; the Krugman/Ilves skirmish would merely be one chapter in a broader musical odyssey. “There is so much material out there: HSBC, Davos, government regulators, Iceland, ratings agencies—and even Nobel Laureate economists and small country presidents,” Diel says. “Perhaps I’d want to create a lizard overlord banker character…There are many ways we could have fun writing—and singing—about financial crisis.”