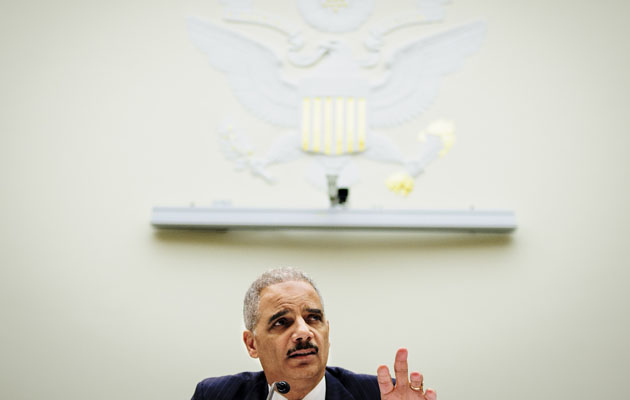 The Justice Department’s seizure of call logs related to phone lines used by dozens of Associated Press reporters has provoked a flurry of bipartisan criticism, most of which has cast the decision as a disturbing departure from the norm. AP head Gary Pruitt condemned the decision, part of an investigation into leaks of classified information, as a “massive and unprecedented intrusion.” Yet there’s plenty of circumstantial evidence suggesting the seizure may not be unprecedented—just rarely disclosed.

The Justice Department is supposed to follow special rules when it seeks the phone records of reporters, in recognition that such snooping conflicts with First Amendment values. As Pruitt complained in an angry letter to Attorney General Eric Holder, those logs provided the government a “road map” of the stories his reporters were investigating, and there is evidence that such seizures deter anonymous sources from speaking to the press—whether they’re discussing classified programs or merely facts that embarrass the government.

Federal regulations require that the attorney general personally approve such a move, ensure the request is narrow and necessary, and notify the news organization about the request—in advance whenever possible. In this case, however, the Justice Department seems to have used an indiscriminate vacuum-cleaner approach—seeking information (from phone companies) about a wide range of phone numbers used by AP reporters—and it only notified AP after the fact.

It wouldn’t be surprising if there were more cases like this we’ve never heard about. Here’s why: The Justice Department’s rules only say the media must be informed about “subpoenas” for “telephone toll records.” The FBI’s operations guidelines interprets those rules quite literally, making clear the requirement “concerns only grand jury subpoenas.” That is, these rules don’t apply to National Security Letters, which are secret demands for information used by the FBI that don’t require judicial approval. The narrow FBI interpretation also doesn’t cover administrative subpoenas, which are issued by federal agencies without prior judicial review. Last year, the FBI issued NSLs for the communications and financial records of more than 6,000 Americans—and the number has been far higher in previous years. The procedures that do apply to those tools have been redacted from publicly available versions of the FBI guidelines. Thus, it’s no shocker the AP seizure would seem like an “unprecedented intrusion” if the government doesn’t think it has to tell us about the precedents. And there’s no telling if the Justice Department rules (and the FBI’s interpretation) allow the feds to seize without warning other types of electronic communications records that could reveal a journalist’s e-mail, chat, or Web browsing activity.

Is it paranoid to fear the Justice Department and the FBI are sidestepping the rules? Consider a case first reported in 2008, and discussed at length in a damning (but heavily redacted) 2010 report from the Justice Department’s Office of the Inspector General. In this instance, the FBI obtained nearly two years of phone records for lines belonging to Washington Post and New York Times bureaus and reporters—even though the FBI had initially requested records covering only seven months. In what the OIG called a “serious abuse of the FBI’s authority to obtain information,” agents seized these records under false pretenses, “without any legal process or Attorney General approval.” And these records remained in the FBI’s database for over three years before the OIG or the press found out.

It gets worse. The OIG report noted that the FBI had made “community of interest” requests to phone carriers; these requests sweep in not only the target’s call records, but those of people the target has spoken with—which can include reporters. Such requests can provide investigators an incredibly revealing portrait of entire social networks. Yet the OIG found that agents used boilerplate requests for information from the carriers; some claimed they submitted the requests without actually knowing exactly what “community of interest” meant, and even when they did it didn’t necessarily occur to them that they were likely to obtain reporter records through such requests. In other words, FBI agents often made these requests without fully understanding what they were requesting.

Only in January 2009 did the FBI think to ask the Justice Department’s in-house lawyers whether the press restrictions apply when reporter records are obtained through indirect means such as community of interest requests. Government lawyers said yes, but the FBI concluded it didn’t have to tell the press in the specific case it had inquired about, because agents had not “understood at the time the subpoenas were issued that the subpoenas called for reporters’ records.”

Lawmakers at a House Judiciary Committee hearing Wednesday grilled Holder about the AP investigation with little success: Holder had recused himself from this leak inquiry and was reluctant to discuss an “ongoing investigation.” But there’s plenty lawmakers can do beyond slamming Holder. Congress could demand an audit of previous government spying on reporters. Such a review would reveal whether the Justice Department believes it must disclose to its media targets when it has spied on reporters using methods other than subpoenas and whether its rules concerning obtaining reporters’ records cover internet material. This sort of audit would also cover how many journalists have been swept into government databases—directly, or indirectly under “community of interest” requests.

The real scandal may be just how much snooping on the media the current rules permit. To fully understand the AP seizures, the media and the public need a clearer picture of the rules governing all forms of spying on media—and how often such info-grabs have happened. Maybe the seizure of AP records is an extraordinary case. Or maybe the only extraordinary thing is that we’re hearing about it.