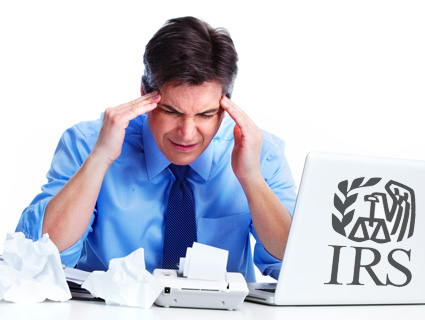 One of the biggest revelations in the Treasury Department inspector general report on the unfolding IRS-tea party debacle is this: The IRS staffers vetting hundreds of tea party groups and conservative outfits seeking nonprofit status for potential political activity weren’t themselves sure what they were looking for. And who bears the ultimate responsibility for this? The very folks who are getting so worked up about the alleged abuses and the dark-money explosion that made them possible: Congress.

The IRS-tea party scandal revolves around 501(c)(4) nonprofits, also known as “social welfare” groups. They can dabble in politics, but it can’t be their “primary activity.” In other words, they can’t be a political party, campaign committee, or a super-PAC in disguise. Yet as the IG report makes clear, the tax law and IRS regulations are foggy on how much politics is too much politics. Not only are activists, lawyers, and political operatives drawing their own conclusions here; even IRS staffers don’t know exactly where the line is drawn. The IRS rules on political nonprofits are like a Jackson Pollock painting: Five people can look at them and arrive at five different conclusions about what they’re seeing.

The regulations for 501(c)(4) nonprofits date back to 1959, but politically active nonprofits did not explode in popularity until recently. For decades, social welfare nonprofits such as the Sierra Club and the National Rifle Association have played significant, yet limited, political roles. They’ve run ads focusing on their pet issues and rated candidates’ positions on those issues, but they shied away from plunging fully into pure politics. But after the Supreme Court’s 2010 Citizens United decision—which ruled that corporations and individuals could pour unlimited amounts of money into outside spending groups—501(c)(4)s surged in popularity, and the number of applications for new ones climbed from 1,591 in 2010 to 3,398 in 2012.

Prominent political strategists including Karl Rove, former Sen. Norm Coleman (R-Minn.), and Obama White House aides Bill Burton and Sean Sweeney embraced the use of nonprofits, which they paired with super-PACs. Doing so gave deep-pocketed political donors the option of giving money publicly (to the super-PAC) or anonymously (to the nonprofit). And the growth of the tea party movement after Barack Obama’s election in 2008 led to a flood of local groups looking to set themselves up as “social welfare” nonprofits with a focus on politics and policy.

Super-PACs hogged the headlines during the 2010 elections, but nonprofits played a bigger role. According to an analysis by the Center for Public Integrity, nonprofits outspent super-PACs by a 3-to-2 margin during the midterms. Rove’s Crossroads GPS spent at least $15 million supporting Republican candidates and Coleman’s American Action Network spent at least $19 million. Both groups ran TV, radio, and online ads to help Republicans regain their majority in the House and break the Senate Democrats’ filibuster-proof majority. They succeeded. (Social welfare nonprofits spent more than $250 million in 2012; most of it was spent by conservative groups.)

IRS rules on political nonprofits are like a Jackson Pollock: Five people can look at them and arrive at five different conclusions about what they’re seeing.

All this dark money—which appeared to violate the spirit of federal campaign laws and IRS regulations—outraged good-government advocates. Congressional Democrats demanded that the Federal Election Commission and IRS crack down on the anonymously funded nonprofits that were flooding the airwaves with election ads. They introduced legislation called the DISCLOSE Act that would have forced 501(c)(4)s to reveal their major donors. The bill “would have removed the incentive for any groups engaged in political campaign activities to seek 501(c)(4) tax exempt status in order to hide their donors from public scrutiny,” said Rep. Chris Van Hollen (D-Md.), who cosponsored the bill. Multiple versions of the DISCLOSE Act have been introduced in the last three years. Senate Republicans have blocked the measure, claiming it was a veiled attempt to punish conservative megadonors.

Meanwhile, the IRS never responded to Democrats’ demands to investigate big-spending nonprofits for getting overly involved in politics. But Senate Republicans did get a response when they asked the agency in 2012 to look into allegations that its employees were harassing tea partiers applying for tax-exempt status. Those complaints prompted the IG’s report that has fueled the current controversy and led to the resignation of IRS Acting Commissioner Steven Miller on Wednesday.

So can anything be done to remedy this mess? Tax experts say the IRS can train its staffers to sniff out overly political groups to prevent future scandals like this most recent one. It could also offer more clarity on what does and doesn’t constitute “political” activity. That could help at the margins. But ultimately, Congress has authority over the tax code, and it could rewrite the law to clarify whether 501(c)(4) nonprofit can get involved in politics and to what degree. “They’re the ones who could eliminate the truly difficult aspects of this vetting process,” says Marcus Owens, a lawyer who worked on tax-exempt issues at the IRS for 25 years.

Lloyd Mayer, a law professor at the University of Notre Dame, agrees. “The law is very unclear and very vague, and Congress could create a clearer definition of what is political activity for these purposes,” Mayer told the Christian Science Monitor.

Ellen Aprill, a law professor at Loyola University in Los Angeles, says that Congress is best positioned to resolve these uncertainties. “It would be better for Congress to do it. They’re the ones who write the Internal Revenue Code. They’re the ones who define exempt organizations are.” And Rick Hasen, a law professor at the University of California–Irvine, notes, “The solution is actually pretty straightforward: Congress should set clear rules to require any entity, regardless of its tax status, to disclose donors whose money pays for federal election ads. If a group does not want to disclose all of its donors—perhaps it does a lot of things aside from running such ads—it can simply set up a separate fund for ads, and disclose only the donors to that fund.” That way, Hasen says, the IRS could shed its role as political watchdog—which it clearly isn’t good at—and focus on the things it does best.

Congress could also get rid of 501(c)(4)s entirely, as John Colombo, a law professor at the University of Illinois, recently suggested in the New York Times. “Let’s make it simple,” he wrote. “If you want to be a charity, be a charity and live with the 501(c)(3) limits; if you want primarily to be engaged in the political process through lobbying or otherwise, pay taxes like everyone else or register as a 527 political organization.” (They could also start a super PAC.)

But it’s not just Karl Rove and the tea partiers who have taken advantage of the slipperiness of the tax code; Democrats have, too. Considering that, Owens says he’s skeptical that Congress will want to do anything to clear up this mess. “All ends of the political spectrum are utilizing that ambiguity to their own advantages,” he says. “It’s hard to find someone above the fray who isn’t utilizing it.”