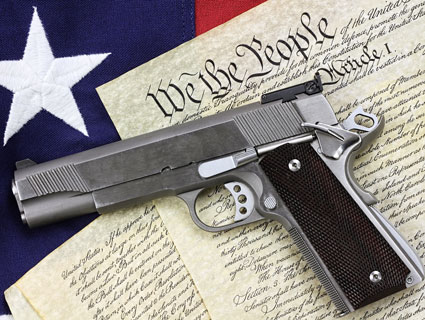 Jay Nixon, the Democratic governor of Missouri, vetoed a sweeping pro-gun bill on Friday that received national attention earlier this year because it aimed to nullify all federal gun laws that state lawmakers decided were in violation of the Second Amendment. The bill also placed journalists in jeopardy of arrest for publishing virtually any information about gun owners—a measure far broader than the journalist-jailing bill signed into law last month by Louisiana’s Republican Gov. Bobby Jindal, and one that could still become law if the state legislature overrides Nixon’s veto later this year.

The Missouri bill, titled the “Second Amendment Protection Act,” would criminalize the publication of any information that identifies a gun owner or applicant by name by making this act a class A misdemeanor, which is punishable by up to a year in jail in the state. Unlike Louisiana’s new law, which only prohibits the publication of concealed handgun permit information, Missouri’s would ban the publication of “the name, address, or other identifying information of any individual who owns a firearm or who is an applicant for or holder of any license, certificate, permit, or endorsement which allows such individual to own, acquire, possess, or carry a firearm.”

“Under this bill, newspaper editors around the state that annually publish photos of proud young Missourians who harvest their first turkey or deer could be charged with a crime,” Nixon said in a statement explaining the veto.

The bill opens with a long-winded states’ rights discourse explaining why the legislation doesn’t violate federal law. It declares the National Firearms Act of 1934, which restricts machine gun ownership, and the Gun Control Act of 1968, which restricts interstate gun transfers, “null and void and of no effect in this state” because they “infringe on the people’s right to keep and bear arms as guaranteed by the Second Amendment.”

Earlier this year, Kansas Gov. Sam Brownback, a Republican, signed into law a similar bill that threatens federal agents with felonies for enforcing gun laws in the state. In response, US Attorney General Eric Holder sent a letter to Brownback threatening litigation if the governor enforced the law, which Holder said was an unconstitutional defiance of federal law. Similar legislation has recently been introduced in about 30 other states.

Missouri lawmakers may receive their own letters from Holder before the end of the year: The state legislature can override Nixon’s veto when it reconvenes in September if both the Senate and House choose to do so by a two-thirds vote. That could easily happen, because both chambers overwhelmingly voted in favor of the bill.