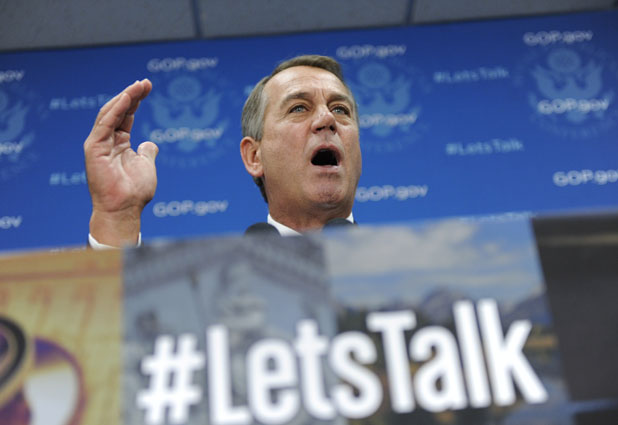 How did the Republican Party become a kamikaze club guided by a small handful of hostage-taking radicals hell-bent on causing chaos to ruin the presidency of Barack Obama? It wasn’t by the design of House Speaker John Boehner and the GOP congressional leadership. This came about because a small number of tea party back-benchers in the House and Senate, assisted by a well-financed network of right-wing organizations (some funded by the billionaire Koch brothers), pushed an issue that was red meat for the GOP’s base—defunding Obamacare—and managed to hijack the party (even more than the tea party already had).

Let’s look at how the Boehner-led GOPers began this latest round of political battle. After Obama won reelection and the Democrats picked up 11 seats in the House last November, Boehner appeared ready to accept political reality. He observed,

It’s pretty clear that the president was re-elected. Obamacare is the law of the land. If we were to put Obamacare into the CR [the bill funding the government, known as a continuing resolution] and send it over to the Senate, we were risking shutting down the government. That is not our goal.

That is, Boehner had no desire to relitigate Obamacare through the budget process.

We have to deal with the fact that President Obama has a second term…A second term will present new challenges to our side—and new opportunities. To take advantage of them, we will need something we occasionally overlook. We will need prudence…We have to make decisions anchored in reality—and take responsibility for the consequences. The prudent man is like a captain at sea. He doesn’t curse the wind. He uses it—to reach his destination.

At a post-election gathering of Republicans that same month in Williamsburg, Virginia, Boehner noted that he would look to the next debt ceiling tussle as an opportunity to win concessions from Obama on spending cuts that would kick in over a 10-year period—not that he would use a possible government default as leverage to smash Obamacare. And when the next funding dust-up transpired in March 2013, Boehner did not see it as a chance to revive the right’s crusade against Obamacare.

But tea partiers did. Reps. Jim Bridenstine (R-Okla.) and Tim Huelskamp (R-Kan.) organized 28 of their fellow firebrands to sign a March 4 letter to Boehner demanding that the CR then under consideration leave Obamacare out of the bill. The letter, according to one report in the conservative media, “shocked” Boehner and House Majority Leader Eric Cantor, and the two quickly scheduled a vote on the budget resolution before the defund-Obamacare camp could gain momentum.

Boehner and Cantor managed to roll the tea partiers. On March 6, they brought the CR (with Obamacare funding intact) to the House floor, and only 14 of the 30 lawmakers who had signed the Bridenstine/Huelskamp letter voted against the spending measure. It seemed that the rebellion had been smothered. Right-wing provocateur Erick Erickson angrily blasted House conservatives for wimping out. In a post put up the day of the vote and headlined, “Today, House Conservatives Will Prove They Are the Problem,” he called on grassroots activists to “see which of these conservative leaders and others fail us and fund Obamacare.”

Days after Boehner quashed the Bridenstine/Huelskamp-led revolt, conservative talker Sean Hannity challenged the speaker and asked him if he were prepared to do whatever was necessary to thwart Obamacare. Boehner replied, “Sean, we’re the minority party in Washington, DC. You’ve got a Democrat president, you’ve got a Democrat Senate. It’s very difficult for us to impose our will on them.” Showing that he was still committed to political reasonableness, Boehner added, “Do you want to risk the full faith and credit of the United States government over Obamacare? That’s a very tough argument to make.”

Yet beyond the speaker’s office, conservatives were plotting. That network of conservative groups led by Edwin Meese III, President Ronald Reagan’s controversial attorney general, kept pushing their defund-Obamacare campaign, whipping up the grassroots even further. In Washington, various conservative advocates, including Groundswell, a gathering of conservative players that coordinated messaging, pushed the defunding effort.

And there was tea party favorite Ted Cruz, the Republican freshman senator from Texas.

On March 6, the day the Bridenstine/Huelskamp effort was derailed in the House, Cruz declared he would offer an amendment to the Senate version of the CR that would delay Obamacare. Sheryl Kaufman, Bridenstine’s communications director and a Groundswell participant, asked Groundswell members to “spread the word” that Cruz was taking up the crusade that her boss had launched.

Cruz’s amendment was defeated in the Senate on a party-line vote. But this marked the beginning of Cruz’s takeover of the Senate Republican caucus. He had delivered his first full speech on the Senate floor to sell his anti-Obamacare amendment. And though many GOP senators in recent weeks have been privately griping about Cruz, all of them lined up with him on this vote, which endeared Cruz to conservative activists and outside groups. The measure lost, but Cruz was elevated, and the episode established him as a right-wing hero who could wreak havoc from within the crusty confines of the Senate.

A Groundswell memo obtained by Mother Jones listed the conservative organizations that had backed Cruz on this initiative: the Club for Growth, Heritage Action, the National Taxpayers Union, the Family Research Council, FreedomWorks, the Tea Party Patriots, Americans for Prosperity, National Right to Life, Concerned Women for America, Citizens Against Government Waste, the Eagle Forum, Americans for Tax Reform, Independent Women’s Voice, American Commitment, the Madison Project, the Senate Conservatives Fund, the Campaign for Liberty, Virginians for Quality Healthcare. And the document noted, “It is important to keep the wave of public opinion growing. Congress needs to be reminded that Obamacare is still an important issue to the public even if they are not inclined to fight about it.” The memo added, “Shout out to Con. Jim Bridenstine [R-OK] for his initial work to repeal Obamacare on the CR that Senator Cruz picked up next.”

So at this point, Republican leaders in the Senate were going along with Cruz though hardly as enthused about the endeavor as the Texan, and Boehner was showing no interest in a scorched-earth campaign against Obamacare that would threaten a government shutdown and/or default on the nation’s debt. In fact, Senate Majority Leader Harry Reid maintains that at the start of September, Boehner told him that he wanted a clean budget resolution—no Obamacare strings attached—at a spending level reflecting the continuation of the automatic budget cuts that resulted from the 2011 deal that ended that summer’s debt ceiling showdown. Reid was happy to oblige, realizing accepting this level of reduced spending would be a compromise from the Democrats’ perspective.

Yet it would not be so simple for Boehner. For months, right-wing groups had been waging their never-ending battle against Obamacare, holding town hall meetings and airing ads, placing pressure on elected Republicans. The tea partiers in the House led by Bridenstine and others felt more emboldened than they had in March. They had no interest in a clean CR. They wanted a rematch. They had seen what Cruz did in the Senate. (They now were directly strategizing with him.) And this time they wouldn’t be outmaneuvered by Boehner. They refused to go along—and essentially took over the GOP caucus. Were Boehner to defy them, he would risk his speakership or, at least, trigger chaos in his caucus that could lead to a civil war within his party. Meanwhile, Cruz became even more of a tea party superstar with his faux filibuster against Obamacare in the Senate—and this bolstered the intransigence of the Cruz-controlled group of tea partiers within the House.

So the plotting on the right worked. Whatever desires Boehner had for the coming year after the 2012 campaign—say, working reasonably with a reelected president on long-term budget matters—they have been wiped out by the tea party extremists, who were encouraged and reinforced by a massive, unrelenting outside effort subsidized by tens of millions of dollars from the Koch network and other funders. The result: Boehner has chosen to lead by being led. He may have been carjacked by a well-organized gang that stuck to a well-designed and well-financed plan, but he is not blameless. After all, he gave up the keys to this car without much of a fight.