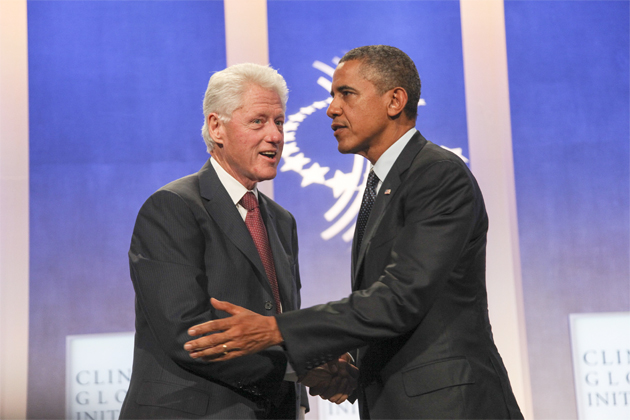 Bill Clinton did it again. On Tuesday, he interjected himself into the ongoing political tussle over the implementation of Obamacare by declaring that President Barack Obama “should honor” his “commitment” to allow people to hang on to their preexisiting health insurance plans. With this comment, the Secretary of Explaining Stuff gave ammo to the foes of Obamacare, and he, unintentionally or not, undermined a core element of the health care law. And, no surprise, he kicked off a spasm of speculation among the politerati: What are the Clintons up to? Will Hillary, if she runs for president, distance herself from the White House? Will she somehow suggest she’s more competent than Obama? All this commentary was to be expected. There’s something about the Clintons that encourages folks to sniff out clever schemes, intricate plots, and self-serving conniving.

But there’s a basic fact that cannot be escaped: The Clintons need Obamacare to succeed. Just look at the chart in the video below:

After Bill Clinton won the presidency in 1992, he placed his wife in charge of health care reform. (It was part of the two-for-one deal.) And she subsequently unveiled a complicated reform plan that was quickly dubbed Hillarycare by Republicans and conservatives. The Clintons did seem to have a decent amount of political momentum on their side, and their GOP foes, fretting about being rolled, initially entertained the crazy idea of working with the White House to hammer out compromises and shape the legislation a bit more to their liking. Then came Sen. Arlen Specter, a cantankerous Pennsylvania Republican (who years later would switch parties). He hit the Senate floor with charts—complicated wire diagrams that appeared nearly impossible to sort out—that purportedly showed that Hillarycare would create a bureaucratic nightmare. It looked incomprehensibly complicated. 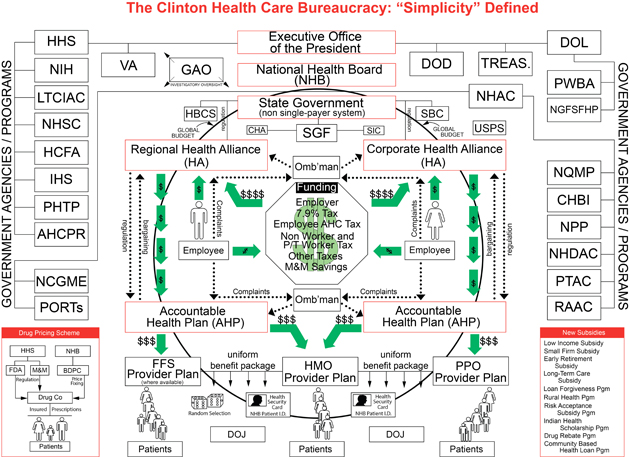 Armey’s office captioned the chart, “Simplicity Defined.” Dole showcased it in his 1994 response to Clinton’s State of the Union address.

After first toying with a get-along strategy for dealing with Hillarycare, the Republicans mounted a fierce opposition against it, and these charts fueled that effort (along with the Harry and Louise ad campaign orchestrated by the health insurance industry). Waving these charts, the GOPers succeeded in killing Hillarycare—and, decrying the Clintons’ health care proposal, they went on to seize control of the House in the 1994 midterm elections.

Hillarycare ended up a political failure and set back the cause of health care reform for nearly two decades. It’s not an episode that Hillary Clinton would want discussed during a 2016 presidential campaign. If Obamacare thrives, there will be no reason to look back to Hillarycare and drag these charts out of the dustbin of history. But should the Affordable Care Act falter or collapse, a question will loom: What would Hillary do about health care? Her past record would be raked over and that would likely not boost her presidential prospects. Having screwed up in the early 1990s, could she argue that she would do a better job in reforming the health care system than Obama?

It would be best for a Clinton 2016 campaign for health care to be off the table—with no need to revisit all this inconvenient ancient history. That means she and Bill should be hoping that the implementation of Obamacare proceeds well—and they should do all they can to encourage that. So Bill Clinton ought to coordinate (closely) with the White House on what stuff he should be explaining. It’s not only the president’s political fortunes that are tied to Obamacare.