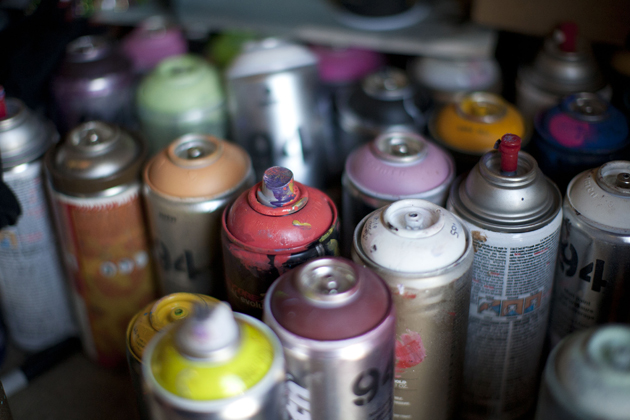 Climate deniers like to point to the so-called global warming “hiatus” as evidence that humans aren’t changing the climate. But according a new study, exactly the opposite is true: The recent slowdown in global temperature increases is partially the result of one of the few successful international crackdowns on greenhouse gases.

Back in 1988, more than 40 countries, including the US, signed the Montreal Protocol, an agreement to phase out the use of ozone-depleting gases like chlorofluorocarbons (today the Protocol has nearly 200 signatories). According to the EPA, CFC emissions are down 90 percent since the Protocol, a drop that the agency calls “one of the largest reductions to date in global greenhouse gas emissions.” That’s a blessing for the ozone layer, but also for the climate. CFCs are a potent heat-trapping gas, and a new analysis published today in Nature Geoscience finds that slashing them has been a major driver of the much-discussed slowdown in global warming.

“The recent decrease in warming, presented by global warming skeptics as proof that humankind cannot affect the climate system, is shown to have a direct human origin.”

Without the Protocol, environmental economist Francisco Estrada of the Universidad Nacional Autónoma de México reports, global temperatures today would be about a tenth of a degree Celsius higher than they are. That’s roughly an eighth of the total warming documented since 1880.

Estrada and his co-authors compared global temperature and greenhouse gas emissions records over the last century and found that breaks in the steady upward march of both coincided closely. At times when emissions leveled off or dropped, like during the Great Depression, the trend was mirrored in temperatures; likewise for when emissions climbed.

“With these breaks, what’s interesting is that when they’re common that’s pretty indicative of causation,” said Pierre Perron, a Boston University economist who developed the custom-built statistical tests used in the study.

The findings put a new spin on investigation into the cause of the recent “hiatus.” Scientists have suggested that several temporary natural phenomena, including the deep ocean sucking up more heat, are responsible for this slowdown. Estrada says his findings show that a recent reduction in heat-trapping CFCs as a result of the Montreal Protocol has also played an important role.

“Paradoxically, the recent decrease in warming, presented by global warming skeptics as proof that humankind cannot affect the climate system, is shown to have a direct human origin,” Estrada writes in the study.

The chart below, from a Nature column accompanying the study, illustrates that impact. The solid blue line shows the amount of warming relative to pre-industrial levels attributed to CFCs and other gases regulated by the Montreal Protocol; the dashed blue line is an extrapolation of what the level would be without the agreement. Green represents warming from methane; Estrada suggests that leveling-out may be the result of improved farming practices in Asia. The diamonds are annual global temperature averages, with the red line fitted to them. The dashed red line represents Estrada’s projection of where global temperature would be without these recent mitigation efforts. 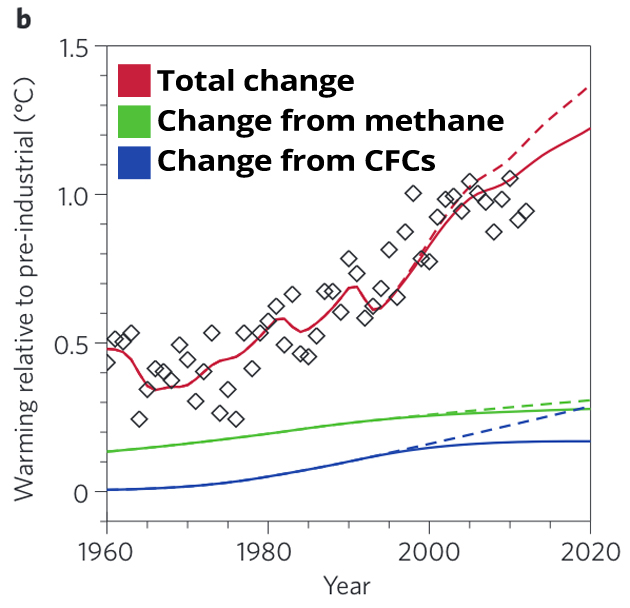 Estrada said his study doesn’t undermine the commonly accepted view among climate scientists that the global warming effect of greenhouse gases can take years or decades to fully manifest. Even if we cut off all emissions today, we’d still very likely see warming into the future, thanks to the long shelf life of carbon dioxide, the principle climate change culprit. The study doesn’t let CO2 off the hook: The reduction in warming would likely have been even greater if CO2 had leveled off as much as CFCs and methane. Instead, Estrada said, it has increased 20 percent since the Protocol was signed.

Still, the study makes clear that efforts to reduce greenhouse gas emissions—like a recent international plan to phase out hydrofluorocarbons, a group of cousin chemicals to CFCs that are used in air conditioners and refrigerators, and the Obama administration’s move this year to impose strict new limits on emissions from power plants—can have a big payoff.

“The Montreal Protocol was really successful,” Estrada said. And as policymakers and climate scientists gather in Warsaw for the latest UN climate summit next week, “this shows that international agreements can really work.”