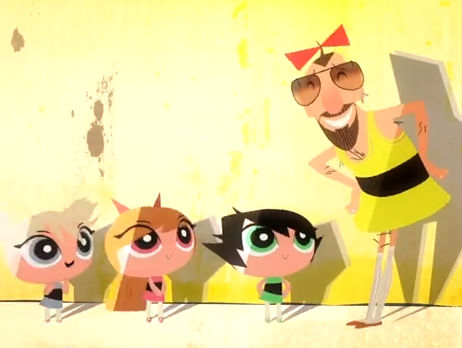 Earlier this month, you might have heard the latest song by ex-Beatle and former NORAD Santa tracker Ringo Starr. It’s a new track he recorded for (of all things) The Powerpuff Girls, a beloved Cartoon Network series about three adorable little girls with superpowers and their professor father.  The show ended its original run nine years ago, but an all-new special episode, titled The Powerpuff Girls: Dance Pantsed, is set to air on Monday night. Starr guest-stars as a mathematician named Fibonacci Sequins (click here to check out his cartoon look), and recorded “Wish I Was a Powerpuff Girl” for an animated music video (which you can watch below).

The A.V. Club called the video “trippy.” BuzzFeed dubbed the tune “the most adorable song.” And Rolling Stone reported that the “video, if nothing else, proves that the experimental Sixties spirit still shines bright.”

This isn’t the first time The Powerpuff Girls has been associated with The Beatles. The episode “Meet the Beat Alls,” which follows a villainous supergroup’s reign of terror, is packed full of Beatles references. But how exactly did the former Beatles drummer end up playing a part in The Powerpuff Girls? Well, according to Dave Smith (who directed the new episode and served as a storyboard artist during the show’s initial run), it took some convincing—and it almost didn’t happen.

“Brian Miller, who runs Cartoon Network in Los Angeles, came up to us one day and said that he’s one degree separated from Ringo Starr, and asked us if we wanted to reach out to him for a role,” Smith says. “We thought Ringo Starr would be fantastic as the mathematician. So we came up with a character design and sent Ringo a brief synopsis of the show and the characters he could play. And he politely declined.”

The Powerpuff team, however, was determined. So Smith created and narrated an animated video presentation about how much he loved the rock star. The video, which also included details of Smith’s draft of the Powerpuff song, described how a nine-year-old Smith became obsessed with Starr’s work—not through his output in The Beatles, but by his role in the 1981 Dennis Quaid film Caveman. “It was so funny and silly, and I thought, ‘man, this guy is genius,’ and searched out more of his stuff,” Smith says. “And two years later, I found out that this guy was the drummer for The Beatles!”

After viewing the presentation, Starr agreed to the project. “I’ll do it, but I have to do my own thing with it,” Starr said, as Smith recalls. He took Smith’s temp track and added his own touches to the ditty.

“Anyone with a creative drive—unless you’re Johnny Rotten—wishes they could collaborate with a Beatle.”

“In a weird way, I’ve collaborated with an ex-Beatle on a song!” Smith says. “Anyone with a creative drive—unless you’re Johnny Rotten—wishes they could collaborate with a Beatle, and I always wanted to—in the same way that I also wanted to go to the North Pole and visit Santa when I was younger.”

About a year ago, Smith visited Starr’s home in Los Angeles to record the song. “There’s this part of the episode where his character says a Fibonacci sequence, instead of saying ‘ouch,’ while falling down some stairs,” Smith says. “It was so fun to see Ringo scream numbers in front of me—it was the most joyous thing ever.”

Smith doesn’t know if Starr has officially been converted into a Powerpuff Girls fan (and Starr’s representative did not respond to Mother Jones‘ request for comment), but at least one member of Starr’s family appears to be. “I was told that his granddaughter found out about this collaboration and said, ‘You are gonna be a Powerpuff Girl? That’s the coolest thing on the planet!'”

Here’s the music video, which includes an animated Ringo Starr jamming with the three Powerpuff Girls: