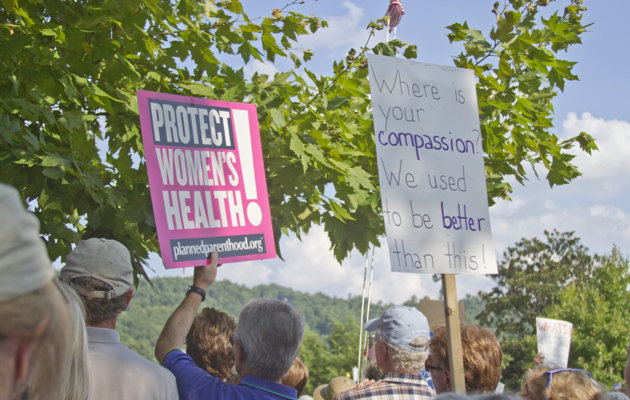 The study, released by the Guttmacher Institute, a pro-abortion-rights think tank, concluded that nearly 1.1 million abortions took place in the United States in 2011, some 700,000 fewer than in 2008. That’s the equivalent of 16.9 abortions per 1,000 women between 15 and 44. During the same time, the number of abortion providers fell by 4 percent and the number of abortion clinics fell by 1 percent.

“The national abortion rate appears to have resumed its long-term decline,” conclude researchers Rachel K. Jones and Jenna Jerman. The rate of abortions in the United State has decreased almost every year since 1981, when, according to Guttmacher spokeswoman Rebecca Wind, there were 29.3 abortions per 1,000 women. The decline halted from 2005 to 2008. As of 2011, the abortion rate not only began to drop again, it also hit its lowest point since 1973.

The authors did not investigate the reasons for the decline. However, since rates of abortion fell consistently across almost all states, and the time period covered by the study predates the surge of state-level anti-abortion laws, the overall decline is likely not the product of new restrictions, the study notes. A few states, however, may have experienced declines related to new restrictions. Missouri’s abortion rate dropped 17 percent between 2008 and 2010, the authors note, perhaps reflecting the impact of a 2009 state law requiring women to seek in-person counseling before getting an abortion. Still, Jones and Jerman write, “It is crucial to note that abortion rates decreased by larger-than-average amounts in several states that did not implement any new restrictions between 2008 and 2010, such as Illinois (18%) and Oregon (15%).”

The increased use of contraceptives is thought to have played a role by reducing the number of unintended pregnancies—in particular among women living in poor economic circumstances who may have used birth control more consistently during the recession and the sluggish recovery period that followed.

Declines in abortions were steepest in Midwest and Western states, and all but six states—Alaska, Maryland, Montana, New Hampshire, West Virginia, and Wyoming, some of which had lower-than-average abortion rates to begin with—experienced decreased rates of abortion.

The loss of providers and facilities which performed abortions may have also had something to do with the drop in abortions. Jones and Jerman also surveyed the accessibility of abortion providers, finding that 38 percent of reproductive-aged women lived in a county without an abortion clinic—some 90 percent of all counties. Abortions induced by medication accounted for nearly 25 percent of all nonhospital abortions in 2011, up from 17 percent in 2008.

Jones and Jerman note that while the drop in abortion providers and facilities—4 percent and 1 percent, respectively—may seem negligible, the caseloads of different facilities can vary widely. Abortion clinics, for example, account for only 19 percent of the facilities that offer abortions, but provide 63 percent of abortions.

Nearly 50 abortion clinics closed from 2008 to 2011—and the drop in clinics was more pronounced than that for other types of facilities that offer abortions. Arkansas, Idaho, Kansas, Oklahoma, and Vermont each lost one clinic. “While these states lost only one clinic each, they had few to begin with, so the loss of even one may have affected access to services,” the authors write. “The closure of a clinic may have contributed to the larger-than-average declines in abortion incidence in Kansas and Oklahoma.”

As of 2011, North Dakota, Mississippi, and South Dakota had only one abortion clinic each.