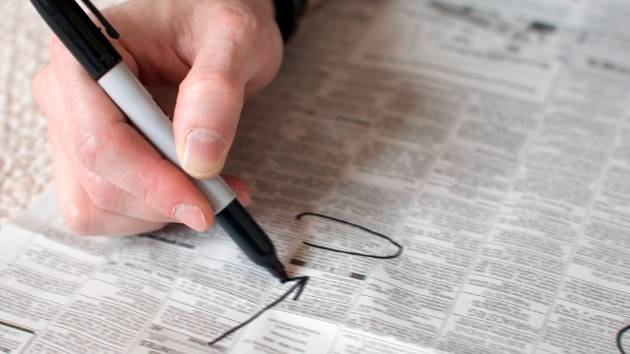 The US economy added 113,000 jobs in January, according to numbers released Friday by the Labor Department. The jobs gains were lower than expected, but the unemployment rate still dropped a tenth of a percentage point to 6.6 percent—the lowest level in five years. In contrast with with previous months, the labor force participation rate—the percentage of people working or looking for a job—increased slightly to 63 percent.

Several factors make it especially hard to make much sense of this month’s job numbers. Unusually cold weather last month meant that more people stayed home, dampening retail sales and hiring. Annual data revisions released Friday show that job growth was slightly stronger last year than initially reported—suggesting that January’s numbers could be low, too. Extended federal unemployment benefits, which expired in December, further complicate the picture: Since individuals are required to search for jobs in order to receive unemployment benefits, the end of those benefits could cause some people to stop their job searches and drop out of the labor force.

The disconnect between the two surveys the Labor Department uses to take the temperature of the economy also make January’s numbers hard to interpret. The survey of employers, which is used to calculate the unemployment rate, found that 113,000 jobs were created last month. That number was much lower than the 616,000 new jobs reported in the survey of households. “Given the statistical mess,” economist Douglas Holtz-Eakin noted Thursday, “the only real message is that the economy is not accelerating significantly.”

The unemployment rate for blacks and Hispanics remained high in January, at 12.1 percent and 8.4 percent respectively. Last month, the jobless rate was 5.7 percent for white people, and 4.8 percent for Asians.

Here’s what the January employment situation looks like in chart form, via Quartz: 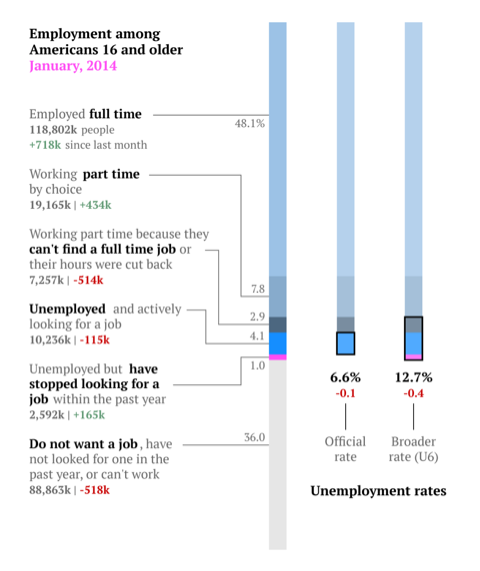 The number of people employed in part-time work because they could not find full-time work fell to 7.3 million in January. Over the past year, full-time employment has risen by 1.8 million jobs, while part-time work has increased by only 8,000, despite fears that part-time work would jump due to Obamacare. (The Affordable Care Act says that employers have to provide health insurance for employees who work more than 29 hours a week.) The Congressional Budget Office just released a report saying that the Affordable Care Act will reduce employment by about 2 million jobs, but that will be mostly due to people leaving jobs they held onto for the health insurance.

The number of people actively engaged in the workforce edged up slightly in January, but economists warn that the labor force participation rate could drop in the coming months because Republicans are blocking an extension of federal unemployment benefits for the long-term jobless. Americans must be actively looking for work in order to qualify for federal unemployment insurance. Without out that incentive, some of those looking for work may give up on their search.