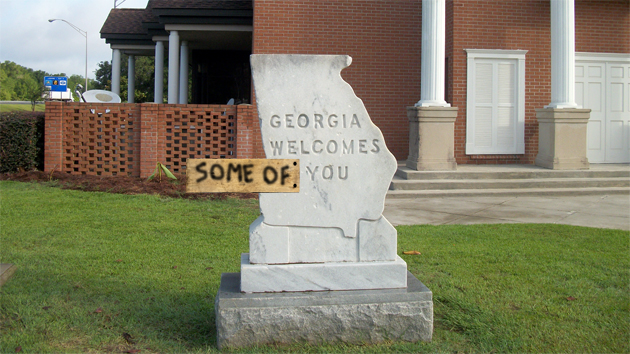 Update, February 28, 2014: State representative Sam Teasley, the first sponsor listed on the bill, told Mother Jones that he has taken the controversial language out of the bill, so that it is now identical to the longstanding federal Religious Freedom Restoration Act. He wrote, “After introducing the bill, a number of citizens expressed concerns that the language could be construed in a way that might encourage discrimination. I do not believe that the bill as introduced does that. It was most certainly not my intent and frankly, as a man of faith, that would be inconsistent with what my faith teaches me. My faith teaches that all people, regardless of belief system, are to be treated with dignity and respect.”? The Senate version of the Georgia bill has reportedly been taken off of the calendar.

A bill moving swiftly through the Georgia House of Representatives would allow business owners who believe homosexuality is a sin to openly discriminate against gay Americans by denying them employment or banning them from restaurants and hotels.

The Georgia bill, which was introduced last week and was scheduled to be heard in subcommittee Monday afternoon, was sponsored by six state representatives (some of them Democrats). A similar bill has been introduced in the state Senate.

Georgia and Arizona are only the latest states to push religious freedom bills that could nullify discrimination laws. The new legislation is part of a wave of state laws drafted in response to a New Mexico lawsuit in which a photographer was sued for refusing to work for a same-sex couple.

Unlike similar bills introduced in Kansas, Tennessee, and South Dakota, the Georgia and Arizona bills do not explicitly target same-sex couples. But that difference could make the impact of the Georgia and Arizona bills even broader. Legal experts, including Eunice Rho, advocacy and policy counsel for the ACLU, warn that Georgia and Arizona’s religious-freedom bills are so sweeping that they open the door for discrimination against not only gay people, but other groups as well. The New Republic noted that under the Arizona bill, “a restaurateur could deny service to an out-of-wedlock mother, a cop could refuse to intervene in a domestic dispute if his religion allows for husbands beating their wives, and a hotel chain could refuse to rent rooms to Jews, Hindus, or Muslims.”

“The government should not allow individuals or corporations to use religion as an excuse to discriminate [or] to deny other access to basic healthcare and safety precautions,” Maggie Garrett, legislative director for Americans United for Separation of Church and State, wrote in a letter to a Georgia House Judiciary subcommittee on Sunday.

State representative Sam Teasley, the first sponsor listed on the bill, did not respond to request for comment Monday.

“The bill was filed and is being pushed solely because that’s what all the cool conservative kids are doing, and because it sends a message of defiance to those who believe that gay Americans ought to be treated the same as everybody else,” writes Jay Bookman, a columnist for the Atlanta Journal-Constitution. “Passing it would seriously stain the reputation of Georgia and the Georgia Legislature.”