On Thursday, the Turkish government blocked the country’s access to YouTube, after banning Twitter earlier this month, in an effort to quell anti-government sentiment prior to local elections on March 30. Turkish Prime Minister Recep Tayyip Erdogan says that social networks are facilitating the spread of wiretapped recordings that have been politically damaging. The YouTube block reportedly came about after a video surfaced of government officials discussing the possibility of going to war with Syria. The government officially banned Twitter after the network refused to take down an account accusing a former minister of corruption. Twitter is challenging the ban and a Turkish court overturned it on Wednesday, but it’s not yet clear how an appeal might play out.

Turkey is hardly the first country to crack down on social unrest by going after social networks. There are at least six other countries currently blocking Facebook, YouTube, or Twitter in some capacity (see map below), and many more have instituted temporary blocks over the last couple of years. Here’s everything you need to know: 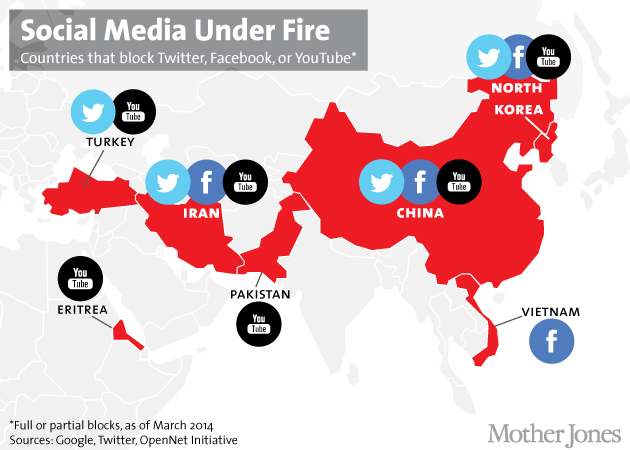 China: China blocked Facebook, Twitter, and YouTube in 2009. The Twitter and Facebook bans took place after a peaceful protest by Uighurs, China’s Muslim ethnic minority, broke into deadly riots in Xinjiang. In September 2013, the government decided to stop censoring foreign websites in the Shanghai Free Trade Zone, a 17-square-mile area in mainland China, but these social networks are still largely blocked nationwide.

Vietnam: Over the last couple of years, there have been widespread reports of Facebook being blocked in Vietnam. The block is fairly easy to bypass, and many Vietnamese citizens use the social network. However, in September 2013, Vietnam passed a law prohibiting citizens from posting anti-government content on the social network. Facebook did not comment on access in Vietnam.

Pakistan: In September 2012, Pakistan blocked YouTube after the site reportedly refused to take down an anti-Islam video that sparked protests in the country. The block has continued through March 2014, according to Google.

Eritrea: According to Reporters Without Borders, in 2011, two of the country’s major internet service providers blocked YouTube. Freedom House, a US watchdog that conducts research on political freedom, said the site was blocked in its 2013 report and notes, “The government requires all internet service providers to use state-controlled internet infrastructure.” Eritrea is routinely listed as one of the most censored countries in the world. Google does not include Eritrea on its list of countries in its transparency report that currently block YouTube, but notes that the list “is not comprehensive” and may not include partial blocks. (Update, 3/31: Since this article came out, some users familiar with Eritrea have said that the site is not blocked, but instead, often inaccessible due to lack of bandwidth. A spokesperson for Freedom House, which found that the site was blocked when investigators put together the 2013 report, said that, “Since Eritrea has one of the worst infrastructures in Africa, it is possible that some ISPs deliberately block services that require a lot of bandwidth, to allow other traffic to be more stable.” He also noted that the government’s poor human rights record indicates that the inaccessibility of YouTube could be related to censorship.)

This data was compiled with help from Google’s transparency report, Twitter, and the OpenNet Initiative, a partnership between the University of Toronto, Harvard, and the SecDev Group in Ottawa. It doesn’t take into account countries where only certain pages or videos may be censored. The United Arab Emirates, for example, jailed an American citizen last year for posting a comedic video to YouTube—but it doesn’t block the entire network, so it’s not on the map. Additionally, Google and Twitter don’t list their services as being blocked in Cuba, but social networks there are difficult to access, in part due to cost barriers.

Outside of these current blocks, many governments have banned social-media networks in the past, during periods of unrest. Here’s a brief history of notable incidents:

Since 2009, Google has counted 16 disruptions to YouTube in 11 regions, often in the wake of protests. In March 2009, Bangladesh blocked YouTube for four days after someone posted a video of a meeting between army officers and the Prime Minister that revealed unrest in the military. Bangladesh blocked the network again for an extended period between 2012 and 2013 over an anti-Islam video. Libya blocked YouTube (and other social networks) for 574 days between 2010 and 2011, after the site hosted videos depicting families of prisoners killed in Abu Salim prison demonstrating in Benghazi, according to Human Rights Watch. Syria blocked YouTube (as well as Facebook) for about three years, lifting the ban in February 2011. Tajikistan has blocked YouTube more than once, most recently in 2013, over a video of the president dancing. Afghanistan blocked YouTube for 113 days between September 2012 and January 2013, after fears that an anti-Islam film on the site would spark further riots. Here’s how Google depicts the Afghanistan ban:

Twitter, which was used as a tool to organize protests during the Arab Spring, was shut down partially or completely by several governments in the region in 2011, including Algeria, Tunisia, Egypt, Cameroon, and Malawi, according to the OpenNet Initiative. Belarus has also blocked major social networks, including Twitter, in 2011 to quell anti-government protests. That same year, when a series of riots swept the United Kingdom, Prime Minister David Cameron threatened to ban people from using social-networking sites, including Twitter and Facebook, although he didn’t go through with it. Targeting specific users or pages is more common than complete bans on Twitter—South Korea, for example, blocked access to North Korea’s official Twitter account in 2010 on the basis that it contained “illegal information.” When it’s clear that a certain Tweet or user is only being blocked in a select country, Twitter flags it as “Country Withheld Content.”

Facebook was also temporarily blocked by several countries during the Arab Spring. In 2010, Pakistan temporarily blocked Facebook after it hosted a competition called, “Everybody Draw Mohammad Day,” which collected about 200 entries. Myanmar has sporadically blocked Facebook; China claims the ban was lifted there in 2013. There have also been instances where governments have blocked fake individual pages pretending to belong to world leaders. In 2008, Morocco went so far as to arrest a man for creating a profile posing as Prince Moulay Rachid. So far, Turkey has not yet chosen to censor Facebook, but that might simply be because it’s not on the prime minister’s radar. “What is this thing called Twitter, anyway?” Erdogan said Tuesday on NTV, a privately owned Turkish news channel. “It is a company, involved in communication, social media, etc.”