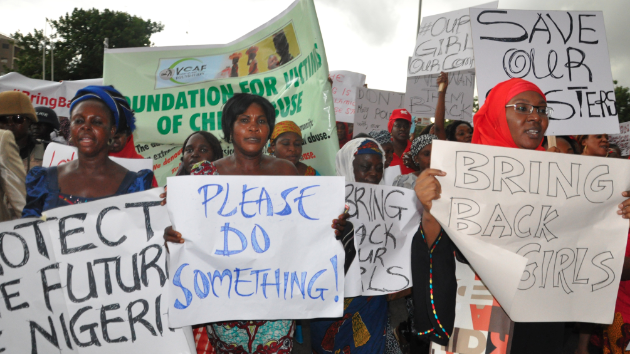 Nigerian women at a protest Wednesday calling on the government to rescue the schoolgirls kidnapped by Boko Haram.AP Photo/Gbemiga Olamikan

Update, Tuesday, May 6, 2014: On Tuesday, US Secretary of State John Kerry offered to send a team to Nigeria to help search for the kidnapped girls, MSNBC reports. Nigerian president Goodluck Jonathan accepted.

Two weeks ago, 234 Nigerian girls were kidnapped from a boarding school in the country’s northernmost state of Borno by the al Qaeda-linked group Boko Haram. Today, most of them are still missing, and Nigerian lawmakers are calling on the international community to step in to help the rescue effort.

“Nigeria should seek international help,” says Rep. Eziuche Ubani, who sits on the country’s house of representatives’ committee on defense. “The Nigerian armed forces are not in a position to defeat the insurgency in the northeast.”

The schoolgirls were captured during a predawn raid on April 15 in the town of Chibok by members of Boko Haram, which the Obama administration recently designated as a terrorist organization. The group, whose name means “Western education is sinful,” believes the Nigerian government has been corrupted by Western ways. In an effort to return the country to the pre-colonial days of Muslim rule, the group has terrorized the country over the past four-plus years, targeting schools in many of its killing sprees, and attacking churches, military checkpoints, highways, the UN building, and, recently, a bus station in the capital city of Abuja.

Though the abduction happened weeks ago, international press coverage of the missing girls has shot up in recent days after Nigerians criticized the foreign media’s initial silence on the issue and launched the Twitter hashtag #BringBackOurGirls.

Nigerian President Goodluck Jonathan has vowed to rescue the girls, but two weeks after the kidnapping, many of the victim’s parents are losing faith in the government’s efforts, especially as reports have emerged that many of them have since been married off to the Boko Haram militants.

“Nigeria has one of the best armed forces” on the continent, says Kyari Mohammed, a professor of security studies at Modibbo Adama University of Technology in northern Nigeria, “but they are not trained for asymmetric warfare.” The militants disguise themselves easily amongst their fellow Nigerians in Borno, and often escape to bordering countries or hideouts in the dense northern forests.

So elected officials in the country are calling for outside aid. The government must do “whatever it takes, even seeking external support to make sure these girls are released,” Nigerian Sen. Ali Ndume told the Associated Press Wednesday. His colleague, Sen. Bukola Saraki, tells Mother Jones the international community should lend a hand to Nigeria in the same way it did to families of the victims of missing Malaysia Airlines flight 370.

The US gives about $1 million a year in aid to the Nigerian military and soon plans to start training Nigerian special forces to fight the insurgency in the north, but American forces would not be able to enter the country to help search for the kidnapped girls unless Nigeria officially requests that the US do so. A spokeswoman for the US State Department says that the department is “in discussions with the Nigerian government on what we might do to help support their efforts to find and free these young women.”

Not everyone buys into the argument that Nigeria needs outside help. “What has happened to the girls is not what is beyond the capability of the Nigerian security forces to handle,” says Mausi Segun, a Human Rights Watch researcher based in Borno state. “The reports we’re getting out of the North is that nothing much is being done on the part of the security forces. They are not using information provided to them by residents and locals in that region.” Parents have been searching the forests near Boko Haram camps in the north on their own for over a week, but they can only do so much, as they are in danger themselves of being killed by militants. Segun says the Nigerian military should make a good faith effort to find the girls before asking for international help.

The Nigerian military doesn’t have a great track record when it comes to stemming attacks by the Islamist militants. Jonathan has promised to defeat Boko Haram, but the insurgency has become bloodier than ever over the past few months. One reason for that, Ubani says, is that the military does not coordinate with security forces in the countries that border Borno state—including Chad, Cameroon, and Niger—where Boko Haram members have been known to hide out. And the Nigerian military’s expenditures are not tracked, Mohammed explains, so even though the country spends about $6 billion a year on its military, it is hard to determine how much of that money goes toward fighting Boko Haram and how it’s used.

Human rights advocates contend the military is not only ineffectual, but that Nigerian security forces’ response to the insurgency, including the indiscriminate killing of northern Muslim men, is worsening Boko Haram violence. The terrorist group has killed some 5,000 Nigerian men, women, and children since it emerged in 2009. In the the first few months of 2014, it has already killed 1,500 people. Boko Haram has abducted school children before, but this time the scale is unprecedented.