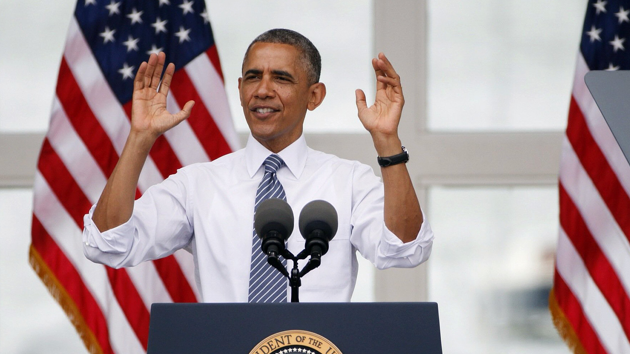 On Wednesday evening, President Barack Obama called for a new Wall Street crackdown, noting that more than five years after the financial crisis, banks still focus too much on gaining profits through often risky trading, instead of investing in Main Street America.

“More and more of the revenue generated on Wall Street is based on…trading bets, as opposed to investing in companies that actually make something and hire people,” the president said in an interview with Marketplace host Kai Ryssdal. He called for “additional steps” to rein in the industry.

Obama’s comments Wednesday represent one of the most pointed critiques he has made of the banking industry since he took office at the height of the financial crisis, and suggest that he may use his final two years in office to pursue further Wall Street reforms.

The president singled out big bonuses as a central problem plaguing the financial system. Banks can still “generate a huge amount of bonuses by making some big [trading] bets,” he said. “If you make a really bad bet, a lot of times you’ve already banked all your bonuses. You might end up leaving the shop, but in the meantime everybody else is left holding the bag.”

He did not offer specific policy cures, instead alluding to the need to “restructure” how banks work “internally.”

The massive Dodd-Frank financial reform law that Congress passed in 2010 was supposed to keep banks from taking excess risks and prevent another economic collapse. Obama pointed out that much of that law has already gone into effect. Banks now have to keep more funds on hand to guard against an economic downturn or a bad trading bet, he said. The law created a new agency designed to prevent consumers from being duped by mortgage lenders, credit card companies, and student lenders. Last year, Wall Street regulators implemented a much-touted Dodd-Frank measure aimed at limiting the high-risk trading by commercial banks that helped lead to the 2008 economic crash.

But much is left to be done. Wall Street regulators have completed only about half of the banking rules mandated by Dodd-Frank. Scores of these regulations have been watered down by financial industry lobbyists. Congress has made many legislative attempts to weaken Dodd-Frank. Despite efforts to ensure that banks are no longer too-big-to-fail—or so large that their collapse would endanger the entire economic system—the largest banks are bigger than they were during the financial crisis.

Progressives fault the president for part of the lax response to the financial crisis. Under Obama’s Justice Department, for example, no high-level bankers went to jail or faced criminal charges for actions that led to the financial crisis. And liberal critics slam Obama’s economic team for focusing too heavily on bailing out banks after the crisis, and allowing the foreclosure crisis to fester.

It is unclear how Obama will push through additional Wall Street reforms. He has limited oversight of rule-making, and banking legislation is not likely to get through the current sharply divided Congress.