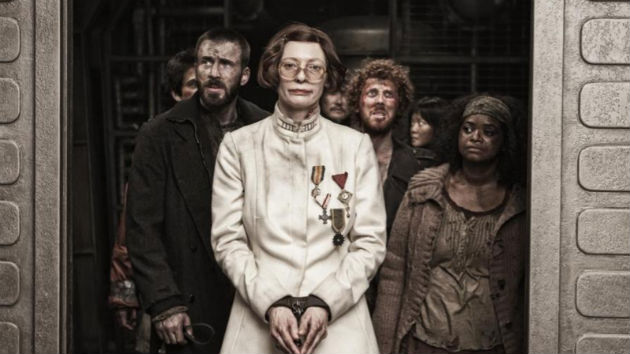 Snowpiercer, directed by Bong Joon-ho and starring Chris Evans, is an ambitious, critically acclaimed new thriller. “While Transformers mucks up cineplexes with its ugly bombast, here, as an alternative, is something truly special, a unique and bracing science-fiction film that stirs both heart and mind,” raves Vanity Fair.

Like so many action films that came before it (both the smart and the monumentally silly), Snowpiercer has political relevance pumping through its veins. In the future, a corporate attempt to reverse the devastating effects of global warming goes horrifically wrong: The experiment ends up murdering most of the planet. Survivors live aboard the Snowpiercer, a train—equipped with a perpetual-motion engine—where the rich and pampered live at the front and the poor and unwashed at the rear. Bloody class warfare ensues.

You get the message.

Here’s Bong discussing the corporate critique and climate-change angle of his film, in an interview with CraveOnline:

In Snowpiercer, it’s more about how big business tries to both use and control nature. And how it backfires on them. Nature takes its revenge and sends them back to the ice age. This is an aspect that is different from the graphic novel [source material] (by Jacques Lob, Benjamin Legrand and Jean-Marc Rochette). I wanted to make a story change because I felt that climate change is more current of an issue and will continue to be, because it’s not in the interest of big business to change, but to control.

Basically, it’s an action movie in which corporate power takes extreme measures to attack the climate, instead of overhauling the way they do business for the sake of the world. They screw over human civilization, and the rest of the film goes the class-division route. “The poor are in the back and the rich are in the front,” Bong told CraveOnline. “So this created an opportunity to talk about the political ideas involved and really examine human nature and why those systems exist. What would we actually discover if they were taken on? We don’t know because it’s so large and affects billions of people. Having a few survivors is a sci-fi element [that] makes it easier to explore these ideas.”

On that note, here’s a trailer for Snowpiercer: