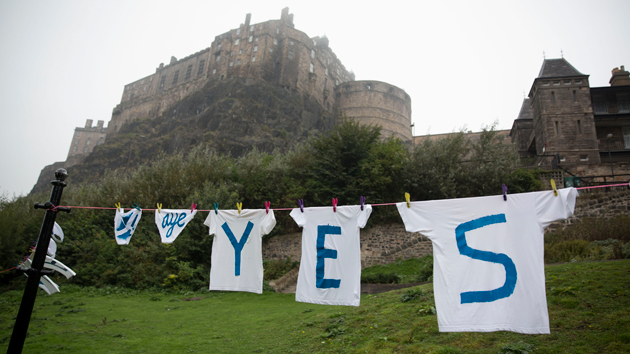 Scotland is heading to the polls right now to decide on whether or not to become an independent country. A “Yes” vote would be the biggest constitutional change for the United Kingdom in over three centuries, splintering a long-held relationship that has seen the good times and the bad, and weathered plenty of mutual disagreements up until now. And like any pending break-up, we find that music helps soothe or heighten the experience, and connects us to the universal themes of love and loss. So, Scottish chums, whatever side you’re on, here’s a playlist for you, on this almighty day-of-days.

1. Queen: I Want to Break Free

Obviously. One for the “Yes” camp. (Worth it in my opinion just for Freddy with a mustache in drag vacuuming the carpet.) “I want to break free from your lies/You’re so self-satisfied I don’t need you/I’ve got to break free!” Sing it Freddy. Sing it Scotland.

If Scotland votes “Yes” and leaves the union bereft and sobbing, this Aussie songtress might be blaring from a few stereos across the Isles tomorrow: “Nothing’s fine, I’m torn.” Sing it England! Sing it Wales!

This is a song that famously landed the Icelandic singer in hot water with the Chinese authorities after a 2008 concert in Shanghai in which she called for Tibetan independence. Brave. She faced a ban from future performances on the mainland after that. It’s easy to see why China’s famously censorial authorities were not impressed: “Start your own currency!/Make your own stamp/Protect your language/Declare independence/Don’t let them do that to you!”

4. Oasis: Don’t Look Back In Anger

No matter what happens, some good advice for both sides. “My soul slides away, but don’t look back in anger.”

That beat speaks for itself.

“Don’t ever get to thinking you’re irreplaceable,” sings Queen Bey. This is the anthem for pretending everything will be fine post-breakup, that it’s not a big deal, that you can find another, just as easily, and that it wasn’t that good anyway, so don’t go thinking you meant anything to me… Get lost.

“Although we’ve come to the end of the road/Still I can’t let you go/It’s unnatural, you belong to me, I belong to you.”

9. Mariah Carey: We Belong Together

Who could miss this song in any breakup playlist? It’s worth watching to the part of the video where Mariah is losing her shit in the apartment, writhing in the short tunic-shirt thing, near the end of this narratively nonsensical clip.

Mm. And lastly, any break-up is incomplete without some sweet late-90s Top 40.