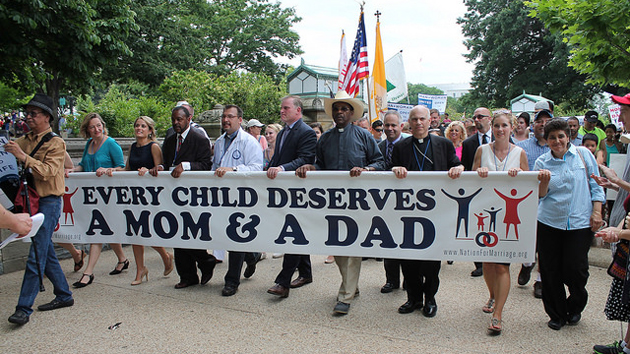 The National Organization for Marriage, a conservative group that campaigns against same-sex marriage, popped the cork for some post-midterms rejoicing on Monday. On its website, the organization “claimed victory” in last week’s elections, gleefully celebrating Democrats’ wins over three Republicans who supported same-sex marriage. But NOM’s joy is a bit misplaced: The Democrats who won support the same policies the group is fighting against.

As I noted back in October, NOM targeted GOP Senate candidate Monica Wehby in Oregon (who endorsed same-sex marriage), and two openly gay Republican House candidates, Carl DeMaio in California and Richard Tisei in Massachusetts. All three lost last week. “I hope that our success in defeating these three Republican candidates sends a message to the Republican leadership in Washington,” NOM president Brian Brown said in the statement, “that the GOP faithful demands candidates who are committed to defending marriage, which is a critical element of the Republican platform.”

But the candidates who defeated Wehby, DeMaio, and Tisei are no friendlier to NOM’s cause than their vanquished foes. Sen. Jeff Merkley in Oregon introduced the Employment Non-Discrimination Act (ENDA), which would ban employers hiring or firing workers based on their sexual orientation, and guided it to passage in the Senate. DeMaio’s opponent, Rep. Scott Peters, had the backing of a number of LGBT groups during his campaign. Seth Moulton, the Democrat who defeated Tisei, blasted NOM when the group said they were supporting him in the race. “Fighting against groups, like NOM, that deny equality as a basic human right will be a priority of Seth’s in Congress,” his spokeswoman told Metro Weekly shortly before Election Day. All three Democrats support same-sex marriage.

Brown and his colleagues are already hoping to use the next presidential campaign to deter Republicans from supporting marriage equality. In its post-midterm blog post, NOM singled out Sen. Rob Portman, a Republican who has been publicly toying with the idea of a presidential run and endorsed same-sex marriage last year after his son came out of the closet. “Rob Portman can forget about getting elected President of the United States,” said Brown, NOM’s president. “If he runs we will make sure that GOP primary voters are aware of his desire to redefine marriage.”