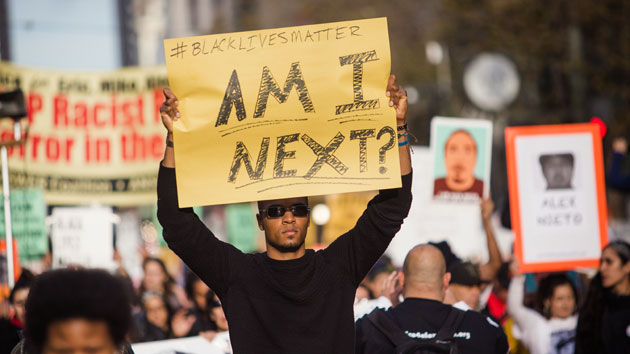 Over the weekend, tens of thousands of marchers rallied against police brutality, standing in solidarity with families who have lost loved ones to police violence. With public scrutiny zeroed in on deaths at the hands of law enforcement, one thing is noticeably missing: a federal record of just how many people die in police custody each year.

This, however, could be changing. Last week, Congress passed the Death in Custody Reporting Act of 2013. Currently awaiting Obama’s signature, it mandates that states receiving federal criminal justice assistance grants report, by gender and race, all deaths that occur in law enforcement custody, including any while a person is being detained or arrested. This would include events like the deaths of Eric Garner and Michael Brown, says Sen. Richard Blumenthal (D-Conn.), a sponsor of the bill, in an interview with Mother Jones.

The bill also mandates that federal law enforcement agencies annually gather and report these deaths to the US attorney general, who in turn has two years to analyze the data, determine if and how it can be used to reduce the number of such deaths, and file a report to Congress.

The bill is backed by groups like the NAACP, which argue that it will increase accountability and transparency. The process it envisions would collect more data than the FBI’s existing Uniform Crime Reporting Program, which only tallies what are considered “justifiable” homicides by police, a designation that can criminalize victims of police killings. As DIY databases have cropped up—the Killed by Police Facebook page, for instance, gets its stats by aggregating news stories—the bill could establish a more accurate and official repository.

But if past measures to collect similar data are any indication, it’s going to be a long time before Washington reliably keeps a comprehensive database of all citizens who die at the hands of the police. Congress has tried to enact similar laws before: In 1994, a statute passed under the Violent Crime Control and Law Enforcement Act mandated that the Department of Justice annually gather, report, and publish a summary of public data counting uses of “excessive” force, but nothing much came of the plan. At some point the task of collecting data fell to the International Association of Chiefs of Police, a professional organization. They maintained a database until 2001, but have not updated it since. Twenty years later, we have no clear understanding of how many people have been killed by police.

Older versions of the Death in Custody Reporting Act have also struggled to compel comprehensive data. The bill passed last week is the reauthorization of the original act, passed in 2000. Initially created in reaction to prison confinement deaths—lawmakers inserted a provision requiring tallies of arrest-related deaths in 2003—that first version accomplished little: Several years passed before states started sending in data, and the bill expired shortly thereafter, in 2006, without a single report having been released. Since then, the provision requiring state counts of arrest-related deaths has stayed on the books—but reporting has never been enforced. Many local law enforcement agencies provide incomplete data, and the Justice Department has published no comprehensive reports in more than a decade.

The bill that passed last week aims to force reporting by tying law enforcement funding to cooperation: States that fail to report police-involved killings can lose up to 10 percent of their federal law enforcement grants. However, it’s up to the attorney general to mete out fines. “Hopefully there will be better compliance and enforcement than existed then, and also more cooperation,” Blumenthal says. “There’s certainly more awareness now about the importance of this data, and much more focus on it.”