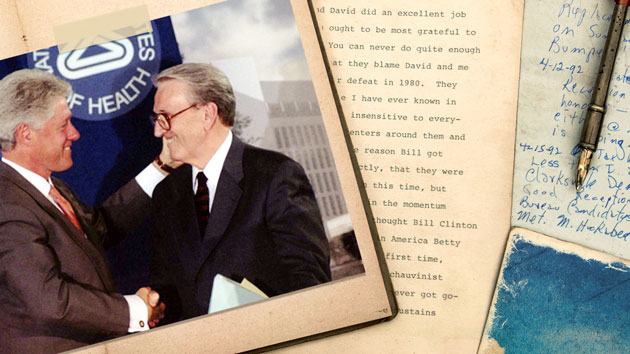 In 1999, three weeks after retiring from the US Senate, Arkansas Democrat Dale Bumpers flew back to the nation’s capital to save his friend of 25 years, President Bill Clinton, from impeachment. Delivering the closing argument for the defense during Clinton’s Senate trial, he testified to Clinton’s character. “In all of those years, and all those hundreds of times we’ve been together, both in public and in private,” Bumpers said, “I have never one time seen the president conduct himself in a way that did not reflect the highest credit on him, his family, his state, and his beloved nation.” His speech was hailed by the press—and by Clinton—as a key ingredient in the president’s ultimate acquittal.

But Bumpers, who is 89, cast the Clintons in a far different light in his diary, portions of which are included in his personal papers at the University of Arkansas in Fayetteville. The collection was opened to the public last year. Writing in his journal during the 1980s, as Bill and Hillary Clinton were on the rise in Arkansas, Bumpers was critical of their character and political future, dismissing them as “manic ambitious” and “manic obsessed” and alleging that Bill Clinton’s gubernatorial campaign had resorted to “dirty tricks.”

Bumpers’ relationship with the Clintons stretched back to the mid-1970s. Although he joined the Senate in 1974 by knocking off Bill Clinton’s mentor, Democratic Sen. J. William Fulbright, Bumpers had gravitated toward the young Rhodes scholar. Bumpers had been drawn to Clinton, he later told a biographer, after watching the young politician deliver “one of the most beautiful speeches I ever heard.” Bumpers backed Clinton’s unsuccessful 1974 congressional campaign, as well as his victorious 1978 gubernatorial bid.

“They are the most manic obsessed people I have ever known in my life.”

But Bumpers soured on Clinton after he was voted out of the governor’s office in 1980 after just one term. “Bill Clinton is a truly tragic figure,” Bumpers wrote in a June 1982 diary entry, as Clinton was considering a comeback. “I doubt that I’ve ever known anybody as manicly [sic] ambitious for political office, but who simply doesn’t have the judgment or character to deal with it once he gets it.”

Then he went even further. “I know of two or three exceedingly dirty tricks his campaign pulled off…and they’re things that if they ever came to light would simply further confirm the suspicion people in Arkansas have of him,” he wrote. “They like him, but they know he’ll do anything to get the office. He’s bright, his heart’s in the right place, he’s energetic, he really wants to make a difference, and he cares deeply about his state. He just simply cannot sort it all out when character is required to make the right decision.” The diary did not make note of what those alleged dirty tricks were. (A Clinton spokesman did not respond to a request for comment.) 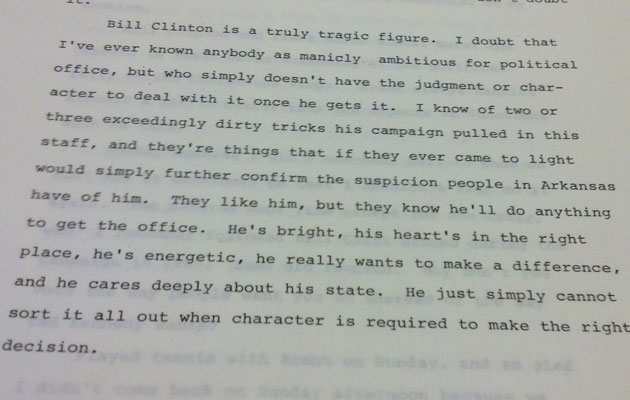 Bumpers, who along with Clinton and then-Sen. David Pryor had helped the state party move from segregationist to progressive, nonetheless gave the former governor a hand on the campaign trail in his 1982 comeback bid. “Clinton ought to be most grateful to both of us, but he never is,” he complained in a September 1982 entry, referring to himself and Pryor. “You can never do quite enough for him and Hillary. I know that they blame David and me both at least partially for their defeat in 1980. They are the most manic obsessed people I have ever known in my life, and perhaps even the most insensitive to everybody else’s feelings. Everything centers around them and their ambitions. It is precisely the reason Bill got beat in 1980. People felt, and correctly, that they were being manipulated.”

Bumpers went on to make a prediction that would ultimately prove mistaken. “Bill’s going to win this time, but in my opinion he won’t be able to sustain the momentum once he takes office,” he noted in 1982. “Years ago when I thought Bill Clinton had the greatest future of any youngster in America Betty [Bumpers, his wife] kept insisting, after she met him the very first time, that he had no character, was essentially a chauvinist and would not be able to sustain anything he ever got going. That Babe Flanagan native intelligence sustains very well.” (Herman “Babe” Flanagan was Betty Bumpers’ father.) 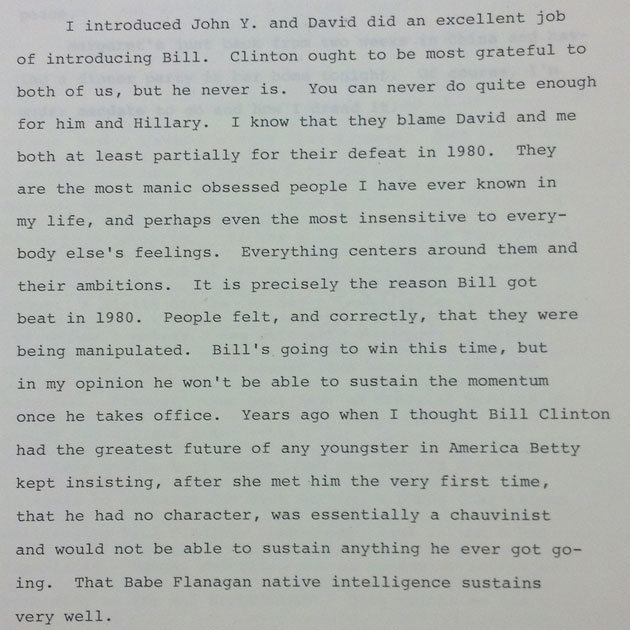 Clinton won his governor’s race that year, but Bumpers’ doubts remained. “I don’t know why I’m cynical about Bill, but he just refuses to show the kind of sensible leadership that people would respect,” he wrote in 1983, a day before meeting with Clinton to discuss the 1984 presidential campaign, which Clinton thought Bumpers should enter. “He has an additional problem, and I feel sorry for him. There’s something about him people like to dislike. He’s brought a lot of that on himself.” Bumpers didn’t elaborate on that particular quality.

The entries from Bumpers diary in his papers at the University of Arkansas span two decades, but the journal included gaps of weeks, months, and sometimes years. He wrote about the pressures of his job, his curiosity at the presidential campaign circus, and the hectic DC social scene. And he often vented about his colleagues—in this regard, the Clintons got off easy compared to many of his contemporaries. “I’ve been predicting for some time that he’ll either be caught with a 12-year-old girl down on 14th Street, or possibly blow his brains and his wife’s brains out,” he said of Sen. Jeremiah Denton (R-Ala.), a former Navy admiral, in 1982.

Bumpers predicted that Illinois Democratic Sen. Paul Simon’s trademark bow tie “is gonna cost him dearly,” dismissed Colorado Sen. Gary Hart (D-Colo.) as a “basket case,” called Rep. James Santini (D-Nev.) a “troglodyte,” and noted seeing married GOP California Sen. S.I. Hayakawa “and his girl friend tap-dancing” at 4:30 a.m. in the halls of the Capitol. A frequent critic of President Ronald Reagan, who Bumpers believed lacked the intellectual capacity to be commander in chief, he questioned the president’s health early on, writing in 1982 that “his mind is blown.”

Over time, Bumpers’ relationship with Clinton improved. He helped keep candidate Clinton anchored during the 1992 presidential campaign, traveling to New Hampshire to provide moral support, and his diary entries from that year are far more measured in his assessment of the future first couple. After he was elected president, Clinton talked to Bumpers and Pryor daily, and leaned heavily on the two senators for help navigating DC’s political hazards. When Hillary Clinton was elected to the Senate in 2000, Bumpers penned an op-ed in the New York Times defending her on her merits. “[T]hey will be hard pressed to criticize her personally,” he wrote. “She will become a colleague they respect.” Last fall, with Bumpers in failing health, the Arkansas Democrat-Gazette reported that Bill Clinton had taken a break from campaigning to visit with Bumpers for an hour and tell the former senator he loved him.

The Clintons ultimately won Bumpers over. It may just have saved Bill Clinton’s presidency.