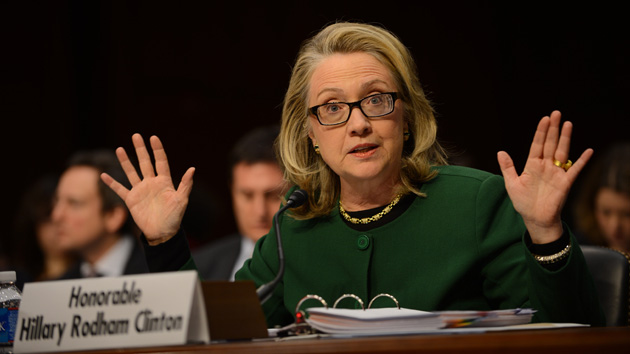 In the 2008 presidential race, Hillary Clinton made no excuses for the $2 million she collected from registered lobbyists, saying, “Based on my 35 years of fighting for what I believe in, I don’t think anybody seriously believes I’m going to be influenced by a lobbyist.” But lobbyists would appear to have more than a little influence on her 2016 campaign. Not only is she still accepting donations from them—something President Obama declined to do in his 2008 and 2012 bids—but she is once again stocking her campaign with them.

There are at least six Clinton campaign staffers who, at one time or another, earned a paycheck as a registered lobbyist. They’ve lobbied for a range of controversial special interests, from the Keystone pipeline and Lehman Brothers to SeaWorld and some of the country’s largest corporations.

Here’s who they are:

Podesta sits atop Clinton 2016, running the entire show alongside campaign manager Robby Mook. Podesta is a longtime buddy of the Clinton clan, having worked in Bill’s White House as chief of staff. After leaving the White House, Podesta started the Democrats-in-exile think tank Center for American Progress, for which he did most of his lobbying work as a policy advocate in the mid-aughts.

Three decades ago, he also helped his brother Tony Podesta found a profit-driven lobbying firm, the Podesta Group. While he was getting the Center for American Progress set up, John Podesta did some lobbying for the group. His clients for the Podesta Group included eBay, the American Insurance Association, and the Agency for Nuclear Projects, an arm of the Nevada government.

Villarreal is a familiar face around Clintonland. He served as a senior adviser on Hillary’s 2008 campaign, and his ties with the family date back to a stint as deputy campaign manager on Bill’s first presidential bid.

Villarreal hasn’t worked as a federal lobbyist since 2009, but when he was in the lobbying world he was particularly active. Over the course of a decade lobbying at Akin Gump Strauss Hauer & Field, LLP, his clients included the largest players in corporate and financial America. A brief sampling: NASDAQ, Nationwide Mutual Insurance, Bridgestone, Boeing, AT&T, Citigroup, Dow Chemical, the Motion Picture Association of America, Disney, PG&E Corporation, Paypal, and the Coalition for 21st Century Patent Reform (funded by 3M, General Electric, and others).

One of the founders of the Boston-based Dewey Square Group, a prominent Democratic consulting firm, Baker is a longtime party insider who sits near the top of Clinton’s team. Back in the late 1990s and early 2000s, Baker did a bit of federal lobbying for Northwest Airlines through Dewey Square, but the bulk of his lobbying work has come at Boston law firm DLA Piper LLP. He’s regularly advocated before Congress for Rhode Island-based Citizens Bank. Other lobbying clients included the pharmaceutical firm Medicines Company, defense contractor Raytheon, and gambling trade association group Interactive Gaming Council. At the local level in Massachusetts, he’s lobbied for AOL, earning DLA $120,000 between 2008 and 2009, and the Sterling Suffolk Racecourse, netting his law firm more than $300,000 between 2008 and 2011. According to disclosures in Massachusetts, Baker personally earned more than $250,000 from that work.

He even managed to pocket a bit of money from the ghost of Lehman Brothers. According to lobbying databases, Baker and three colleagues collected $10,000 from Lehman Brothers to lobby Congress at “hearings on financial services crisis.” That happened between October and December 2008—after Lehman had already been liquidated through bankruptcy that September.

The former director of communications for Obama at the White House, Palmieri jumped ship to serve the same role on Clinton 2016. She worked as a deputy press secretary in Bill Clinton’s White House. Afterward, Palmieri turned toward lobbying, but eschewed corporate clients to work for liberal causes. In 2001, Americans for Gun Safety paid Palmieri and five others $1.2 million to lobby for background checks for gun purchases. In 2006 and 2007 she was registered as a lobbyist for the Center for American Progress, trying to sway members of Congress against the Iraq War.

Clinton recently hired Berman, Barack Obama’s 2008 delegate guru, to run the math for her primary campaign, just in case Bernie Sanders does end up challenging her in the contest for delegates. Berman brings expertise on the byzantine rules of caucus delegate counting, but he’s also known as a prominent lobbyist for a project fiercely opposed by environmentalists: the Keystone pipeline.

“Hillary Clinton has hired a former lobbyist for the company behind the Keystone XL pipeline,” The New Republic‘s Rebecca Leber wrote last month, “further upsetting environmentalists who have long been wary of her commitment to fighting climate change.” As the Huffington Post noted, the firm Berman worked for, Bryan Cave, received $980,000 from TransCanada for lobbying work from 2009 to 2011. Berman was part of the team lobbying for the pipeline, and TransCanada paid hundreds of thousands of dollars for his share of the work.

Berman worked for a host of other corporate clients during his years at Bryan Cave, which he left earlier this year to set up his own public affairs shop. According to the Senate’s lobbying disclosure database, Berman influence-peddled for SeaWorld, Gogo (the inflight wifi company formerly known as Aircell), the GEO Group (America’s second-largest private prison corporation), and FedEx.

Balsbaugh has the distinction of being the first, and so far only, Clinton staffer working the ground in Massachusetts. He worked as a lobbyist for the Dewey Square Group in the state, generally on health care issues for the Massachusetts Patient Advocacy Alliance, a group that advocates easing restrictions on medical marijuana. In the first half of 2012, he received $25,000 for pressing Massachusetts lawmakers to loosen medical marijuana laws. At Dewey Square, he also worked for other liberal causes, such as the Immigrant and Refugee Advocacy Coalition and the Massachusetts League of Environmental Voters.