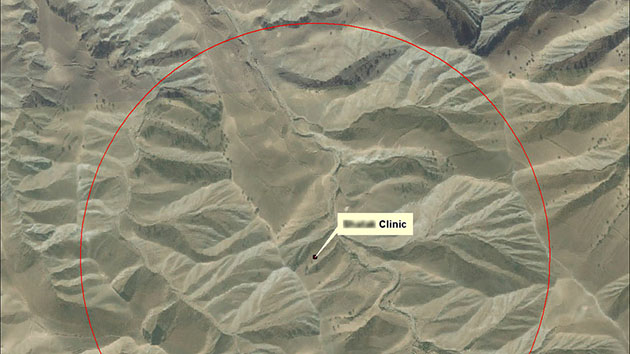 One set of coordinates provided to SIGAR by USAID led to this random spot. The SIGAR caption read: "Blurred figure 1 - no structure half mile."<a href="https://www.flickr.com/photos/sigarhq/sets/72157655207103116">SIGAR</a>/Flickr

Under the US Agency for International Development’s Partnership Contracts for Health program, the US government helps support basic health care needs for people across Afghanistan. As of March 2015, it had spent more than $210 million on the program, spread across 641 individual facilities.

But the location data USAID gave to a federal inspector general doesn’t seem to line up with actual facilities. John F. Sopko, the special inspector general for Afghanistan reconstruction (SIGAR), who leads the group charged with making sure Afghanistan reconstruction resources are used appropriately and lawfully, told USAID in a June 25 letter that the location data are incorrect—sometimes wildly so—for nearly 80 percent of the 641 health care facilities the agency is helping to support. Using geospatial data from the Army Geospatial Center, SIGAR tried to verify location data for the list of facilities that USAID provided.

“Thirteen coordinates were not located in Afghanistan,” Sopko wrote, noting that six were in Pakistan, six were in Tajikistan, “and one was located in the Mediterranean Sea.” There were also 13 cases where USAID reported two distinct facilities at the same location, more than 150 coordinates that didn’t clearly identify a specific building, and 90 cases where a location wasn’t provided, Sopko wrote. “To provide meaningful oversight of these facilities, both USAID and [the Afghan government] need to know where they are,” he added.

USAID says the data SIGAR used for its analysis is Afghan government data rather than USAID data, that USAID data is accurate, and that the agency knows how to find these clinics and monitor them, thank you very much.

“Local staff, third-party monitors, Afghan Government officials, and the benefiting community do not use GPS to navigate, let alone to find a health facility, because they are familiar with the area or from the community benefiting from the project,” Larry Sampler, an assistant to the administrator for Afghanistan and Pakistan affairs for USAID, said in a statement provided to Mother Jones. Sampler said USAID has put in place a “rigorous” monitoring system to oversee these clinics.

A USAID spokesperson further said the agency has its own set of data, distinct from Afghan government data, and that it is working with the Afghan government to bolster its record-keeping, a process that has already improved the Afghan data in the time since SIGAR requested information in the first place.

In response, a SIGAR spokesperson told Mother Jones that the information was originally requested in the course of an ongoing investigation into the Partnership Contracts for Health program, and that SIGAR went forward with the information provided by USAID. When asked why USAID didn’t just give SIGAR the correct data if it had it, a USAID spokesperson said, “The separate USAID data came from third party site visits that took place after May of 2014. I believe that SIGAR’s initial request for the data was informal in nature. SIGAR did not express concerns about the data with us prior to this inquiry letter.”

The point might seem trivial, but the geospatial data within geotagged photos, along with site visits, are used by USAID to verify that inspections actually take place. In a country where civilian travel is incredibly difficult, geotagged photos with precise location data are one of the best ways to ensure work is getting done and money is being spent correctly. In order to inspect these costly facilities, it’s helpful to agree on where to find them.