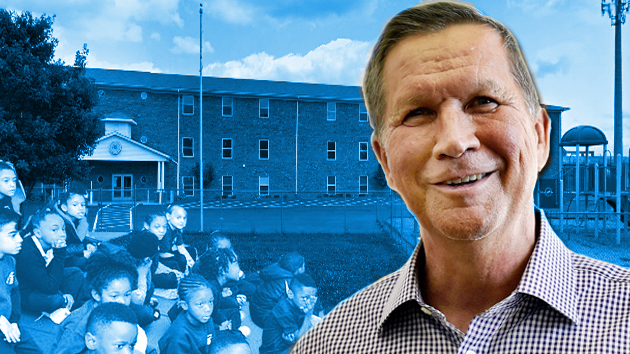 When Leon Sinoff was asked to sign off on a building lease for Imagine Columbus Primary Academy in Columbus, Ohio, in the summer of 2013, he had little reason to be skeptical. Before Imagine Schools, one of the nation’s largest for-profit charter management companies, asked him to join the new charter school’s board, Sinoff, a public defender, had no education background or experience. “I relied on their expertise and thought to myself, ‘Well, who am I to say no to this proposal?'” Sinoff says.

But by the start of the second school year, he was having doubts. The school received an F grade for achievement on the 2013-14 state report card. Only three teachers had returned after the first summer break; within two years, two principals and one vice principal stepped down. The school—which serves a high-poverty, low-income community—lacked arts, music, and foreign language classes, and whenever the board inquired about adding them, Imagine said there wasn’t enough money. Then Sinoff discovered that the $58,000-a-month lease—consuming nearly half the school’s operating budget, compared with the national standard of 8 to 15 percent—was for a building owned by a subsidiary of Imagine, Schoolhouse Finance LLC.

“It clicked for me. Aha! This is self-dealing. That’s why we are massively overpaying for the lease,” says Sinoff, who resigned with the other board members this summer. He adds, “Imagine is perfectly happy cranking out low-quality schools and profiting off them. They don’t care particularly about the quality of the kids’ education.”

Before Imagine Columbus Primary Academy opened, a different Imagine school operated in the building for eight years. Its story was nearly identical: The struggling school was paying enormous sums to Schoolhouse Finance while languishing on the state’s “academic emergency” list—a designation reserved for F-rated schools—before its board voted to shut it down. One member of that board was David Hansen, who shortly after the school’s closing was appointed by Gov. John Kasich to a newly created position: executive director of Ohio’s Office of Quality School Choice and Funding. Kasich tasked Hansen with overseeing the expansion of the state’s charter schools and virtual schools, which are online charter schools typically used by homeschoolers.

“Imagine is perfectly happy cranking out low-quality schools and profiting off of them.”

In July, Hansen resigned after admitting he had rigged evaluations of the state’s charter school sponsors—the nonprofits that authorize and oversee the schools in exchange for a fee—by not including the failing grades of certain F-rated schools in his assessment. Specifically, he omitted failing virtual schools operated by for-profit management companies that are owned by major Republican donors in the state.

Kasich, now running for the Republican presidential nomination, has waved off the Hansen scandal. “I mean, the guy is gone. He’s gone,” Kasich told reporters on the campaign trail. “We don’t tolerate any sort of not open and direct communication about charter schools, and everybody gets it. So that’s kind of the end of it.”

But Kasich can’t distance himself from the problems so easily. He appointed Hansen to his role, and Hansen’s wife is Kasich’s current presidential campaign manager and former chief of staff. He presided over an expanded charter regime with loosened oversight. Troubled charter schools like those operated by Imagine, which had 17 schools in Ohio at its apex in the 2013-14 school year and 14 schools last year, have proliferated in this environment. Schools with D or F grades receive an estimated 90 percent of the state’s charter school funding. Virtual schools, which have an even worse academic track record and insufficient quality controls have been permitted to flourish.

In the four years that Kasich has been in office, funding for traditional public schools has declined by almost half a billion dollars, while charter schools have seen a funding increase of more than 25 percent. Much of that funding appears to have been misspent. When State Auditor David Yost visited 30 charter schools unannounced this past fall, he found that in more than half of them, attendance was drastically lower than the schools had reported to the Department of Education. Because the state typically dispenses funds based on student enrollment, inflated classroom numbers can mean extra dollars for a school.

It wasn’t until this winter, after Stanford University’s Center for Research on Education Outcomes released a report finding that achievement in Ohio’s charter schools fell significantly below the state’s regular public schools, that Kasich began speaking about the need for reforms. “We want to clean up these charter schools that are not doing a good job,” he said in February. He laid out a plan to get serious about charter sponsor evaluations—the same evaluations Hansen was overseeing and later rigged.

“Kasich’s talked a good game about it,” says Stephen Dyer, a former Democratic state legislator and current education policy analyst at Innovation Ohio, a Columbus think tank. “He’s done some public posturing that’s been positive, but when you look at the actual results under his watch, our charter schools have become a national joke, and he hasn’t been able to get through any meaningful sort of broad-based reform.”

Even Ohio organizations that support school choice, such as the Fordham Institute and the state chapter of StudentsFirst, founded by Michelle Rhee, have called for greater reforms. The National Association of Charter School Authorizers, a Chicago-based organization that coincidentally hired Hansen in 2009 to oversee external affairs, referred to Ohio as the “Wild, Wild West” of charter schools.

In his first year in office, Kasich lifted the state’s cap on the number of charter schools that could operate, and the following year he signed a bill ending a decade-long moratorium on new virtual schools. That same year, Kasich signed legislation that relieved virtual schools of any responsibility to report how much they spend on classroom instruction. The bill also stipulated that virtual-school students would be automatically re-enrolled each year so that there would be “no interruption in state funding.” Given that virtual schools have some of the highest attrition rates and funds are allocated on a per-pupil basis, the measure gave funds to virtual schools before they even knew what their true enrollment would be.

“It doesn’t make sense unless you look at it through a political prism,” says Dyer.

When the national charter school discussion began in the early 1990s, the conversation centered largely on the idea of small, innovative schools that matched the specific needs of a particular student demographic. Early advocates hoped charter schools would become laboratories for innovative teaching methods that would one day be integrated into traditional public schools. Terms like “competition” and “portfolio model,” associated today with charter schools, were in many ways the antithesis of the original design. But the model began to change in the late 1990s, when, according to National Education Policy Center researcher Gary Miron, people from the business sector decided they wanted to test market theories on education.

Ohio’s charter law went into effect in 1998, and corporate interests were all over the state’s school-choice blueprint. “It was a political movement, not an education movement,” says Dyer. “You have big political contributors who have really driven the school-choice movement in Ohio for a long time.”

The two central figures in Ohio’s corporate charter movement, David Brennan and Bill Lager, have donated a combined $6.4 million to state legislators and committees, more than 90 percent of which went to Republicans, who have dominated the state House and Senate. Their donations have paid off. Since 1998, the state has given $1.76 billion to schools run by Brennan’s White Hat Management and Lager’s Electronic Classrooms of Tomorrow, accounting for one-quarter of all state charter funds.

“Why do we accept this for our kids? It’s not good enough for kids in Missouri, but it’s okay for kids in Ohio?”

F-rated virtual schools run by White Hat Management were among the charters Hansen purposely omitted from sponsor evaluations this summer, resulting in an “exemplary” grade for the Ohio Council of Community Schools, which sponsors many White Hat virtual schools. Another sponsor that benefited from Hansen’s flawed math, Buckeye Community Hope Foundation, oversees 51 charter schools, including another struggling Imagine school on whose board Hansen previously sat.

The majority of the Ohio Department of Education’s elected board members—other members are appointed by the governor—have called for an investigation into Hansen’s manipulated evaluations and for the resignation of State Superintendent Richard Ross*. Kasich has brushed off both requests, instead proposing a restructuring of the board to provide greater gubernatorial control. “I don’t like the structure of it,” Kasich told the Columbus Dispatch. “I don’t like the infighting.”

Tim Pingle, a former Imagine Columbus Primary Academy principal, is frustrated that schools like his old one are allowed to remain open. “Why do we accept this for our kids?” he asks, noting that Imagine Schools was kicked out of Missouri after years of financial and academic concerns. “It’s not good enough for the kids in Missouri, but it’s okay for kids in Ohio?”

In June, the Ohio Senate approved bipartisan legislation to reform the state’s charter schools, but the measure stalled in the state House. And so last week, Imagine Columbus Primary Academy opened its doors for its third year—with its third principal and second school board.

“I’m sure [Imagine’s new board] is even more oblivious than we were, given that we caused a lot of trouble in the end,” says Sinoff, who resigned after Imagine refused to re-negotiate the high-priced lease. “I think that they are not entirely happy that we squeaked through the filter to make life difficult. I’m sure they haven’t made that mistake again, and they have folks even more oblivious than we were.”