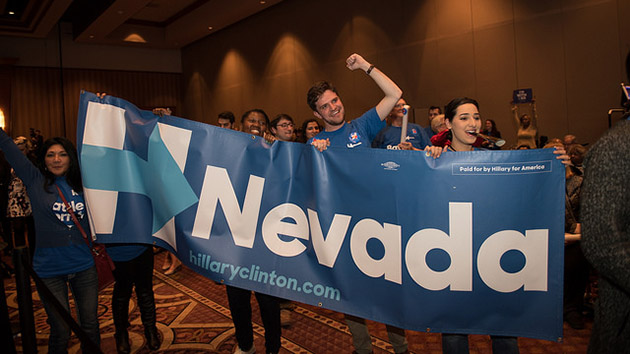 Stinging from its lopsided defeat in New Hampshire and bracing for a tougher-than-expected primary fight against Bernie Sanders, the Hillary Clinton campaign has sought to lower expectations for the next contest, this Saturday’s Nevada caucuses. To do so, the campaign has been subtly pushing a curious line: Don’t read too much into the results of the Nevada caucuses because the state is disproportionately white, just like New Hampshire and Iowa.

As I explained last week, Nevada should be a firewall state for Clinton, and that’s how the Clinton campaign long painted it. But last Tuesday, campaign spokesman Brian Fallon tried to dash those impressions during an appearance on MSNBC. As recounted by BuzzFeed‘s Ruby Cramer, Fallon tried to suggest that Sanders had an edge in the caucuses thanks to the makeup of the state.

“There’s an important Hispanic element to the Democratic caucus in Nevada,” Fallon said. “But it’s still a state that is 80 percent white voters. You have a caucus-style format, and he’ll have the momentum coming out of New Hampshire presumably, so there’s a lot of reasons he should do well.”

Campaign manager Robby Mook, who ran Clinton’s 2008 campaign in the state, made a similar argument the next day when talking with congressional Democrats:

/4 Mook: “There’s a sizable Hispanic population in Nevada, but about 80% of Dem caucus voters in that state are white.” That helps Sanders

Is Nevada as lacking in diversity as Iowa and New Hampshire? Not even close. It’s actually one of the more diverse states in the country. The population is 9 percent African American, just a few points below the national average of 13 percent. It’s also 9 percent Asian American or Pacific Islander, above the national 5.6 percent average. And Nevada boasts a far larger Latino population than the country: 27.8 percent, versus 17.4 percent nationally.

Where does the Clinton campaign come up with the idea that Nevada is so overwhelming white? It all comes down to the difficult terminology of race and ethnicity. Technically, the state is 76 percent white, but that’s because most people who identify as Latino or Hispanic are included in that category. Separate them out, and the state is just 51.5 percent non-Hispanic white.

Compare that to Iowa and New Hampshire, which are, respectively, 87 percent and 91 percent non-Hispanic white.

It’s possible that Nevada’s minority populations won’t show up to caucus in large numbers. But that doesn’t seem too likely, at least based on the 2008 caucuses, when 35 percent of caucus voters were racial or ethnic minorities, according to exit polls. The state’s minority population has only grown since 2008, so there’s little reason to expect the caucus-going population to look that much whiter than in 2008.

With Sanders having captured the momentum after his big New Hampshire win, Clinton really may have a more difficult time in Nevada than she anticipated. But she can’t blame it on demographics.