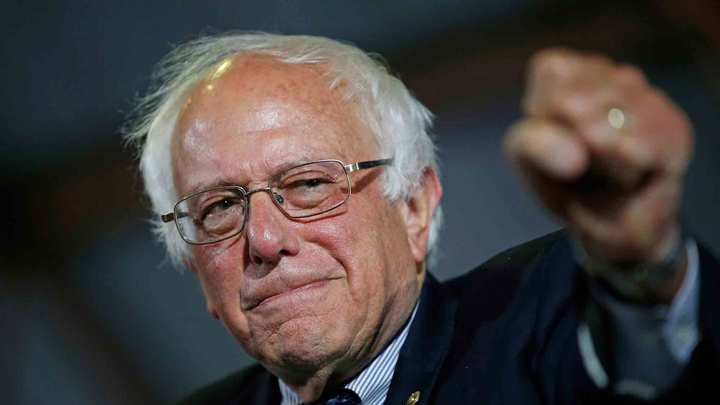 Vermont Senator Bernie Sanders on Thursday night shifted the focus of his presidential campaign, re-framing it as a long-term movement and pledging to fight for change at the Democratic National Convention and beyond.

“Defeating Donald Trump cannot be our only goal,” Sanders said in an online address watched by some 100,000 people. “We must continue our grassroots effort to create the America that we know we can become. And we must take that energy into the Democratic National Convention.”

Noting that he had recently met with his Democratic rival Hillary Clinton, Sanders made clear that he would not drop out of the presidential race anytime soon. “I look forward in coming weeks to continued discussion between the two campaigns,” he said, adding that he wanted to make certain that the Democratic Party passes the most progressive platform in its history and becomes “a party of working people and young people and not just wealthy campaign contributors.”

Sanders did not indicate which of his campaign’s core issues might be priorities in his negotiations with Clinton; instead, he rattled off more than a dozen talking points, from raising the minimum wage to $15 an hour and winning pay equity for women to implementing a carbon tax and ending “perpetual wars.”

The speech seemed aimed at shifting the focus of Berners from the presidential election to longer-term progressive goals, while still maintaining their interest and enthusiasm. The campaign’s latest slogan—”the political revolution continues”—repeatedly surfaced as a theme.

“We have begun the long and arduous process of transforming America, a fight that will continue tomorrow, next week, next year, and into the future,” Sanders said. He urged his young supporters—”the people who are determining the shape and future of our country”— to run for state and local office. “We need new blood in the political process, and you are that blood,” he said.

@JoshHarkinson I was apprehensive that it’d be a closure, but was an opening: to local and grassroots participation. Democracy at its best.

@JoshHarkinson His focus on local politics seems smart to me. There needs to be a counter to gerrymandering by the GOP state legislatures.

Yet the reaction to Sanders’ shift in focus elicited mixed reactions from the Bernie or Bust crowd:

#bernieorbust #JillnotHill NOOOOOOOOOOOOOOO. Did she roofy your drink when you met?

He just spent 5 minutes attacking the party, I doubt he endorses her. #FeelTheBern #BernieOrBust

#PoliticalRevolution began in 2016! Us! Thank you @BernieSanders it was so inspiring. #FeelTheBern #BernieOrBust

Attempting to capitalize on the early idealism of his campaign, Sanders stressed that his race could still turn out to be an historic turning point for  progressives—if his supporters carry out his vision. “My hope is that when future historians look back and describe how our country moved forward into reversing the drift toward oligarchy,” he said, “…that they will note that to a significant degree that effort began with the political revolution of 2016.”