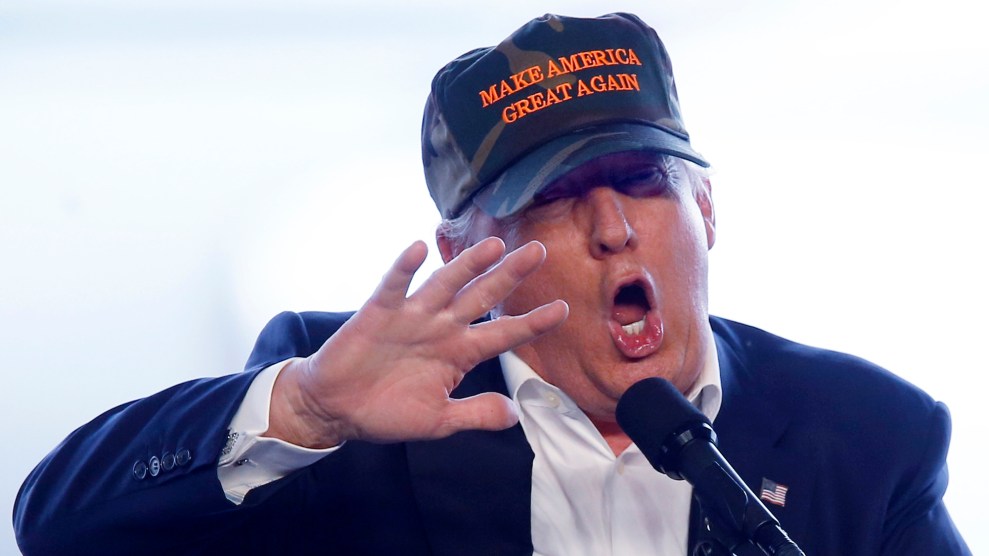 Presumptive Republican nominee Donald Trump launched a forceful, angry attack on immigration and Muslims in a speech in Manchester, New Hampshire, on Monday, renewing his call to ban Muslims from entering the United States and saying Hillary Clinton would allow potential terrorists into the country.

“We cannot continue to allow thousands upon thousands of people to pour into our country, many of whom have the same thought process as this savage killer,” Trump said, referring to the man who killed 49 people at a gay nightclub in Orlando on Sunday. The speech was scheduled before Sunday’s attacks and was originally planned as a major anti-Clinton campaign speech, but the Trump campaign retooled the remarks to “further address this terrorist attack, immigration, and national security.”

Trump blamed lax immigration laws for the killer’s presence in the United States, erroneously saying that he was born in Afghanistan and that his father supports the Afghan Taliban. (The father, Siddique Mateen, is a television commentator whose political views appear to be incoherent.) “The bottom line is that the only reason the killer was in America in the first place was because we allowed his family to come here,” Trump said.

Immigration dominated the speech, with Trump growing angrier and louder as he claimed the Obama administration and Hillary Clinton want to allow huge numbers of refugees into the United States without proper screening. “Under the Clinton plan, you’d be admitting hundreds of thousands of refugees from the Middle East with no system to vet them, or to prevent the radicalization of their children,” he said. As an example, he falsely cited a “tremendous flow of Syrian refugees into the United States.” In reality, fewer than 2,000 Syrians have entered the United States so far in 2016, representing less than a fifth of the intake the government had promised.

More ominously, Trump suggested that American Muslims are operating as a fifth column by hiding attackers like Omar Mateen, the Orlando shooter, and the couple that carried out the San Bernardino terrorist attack last year. “They have to work with us, they have to cooperate with law enforcement,” Trump said of American Muslims. “They knew that he was bad. They knew that the people in San Bernardino were bad. But they used the excuse of racial profiling for not reporting it.”

By attacking radical Muslims, Trump also tried to cast himself as a defender of the gay community. He started the speech with a moment of silence for the victims of the shooting and called the attack “an assault on the ability of free people to live their lives, love who they want, and express their identity.” Trump, who opposes same-sex marriage and has vowed to overturn the Supreme Court ruling that made it legal nationwide, later called Clinton’s immigration policies a betrayal of the gay community. “Hillary Clinton can never claim to be a friend of the gay community as long as she continues to support immigration policies that bring Islamic extremists to our country who suppress women, gays, and anyone who doesn’t share their views,” he said.

The speech was not the first time Trump addressed the Orlando attack. On Sunday, Trump published tweets thanking his followers for the “congrats for being right on radical Islamic terrorism” and calling again for a ban on allowing Muslims into the United States, a proposal other Republicans have said he should drop. Trump then suggested on Monday that President Barack Obama may purposefully be turning a blind eye to terrorism, winking at conspiracy theories that Obama is secretly Muslim and anti-American. “He doesn’t get it or he gets it better than anybody understand,” Trump said during an interview on Fox & Friends. “It’s one or the other.” He repeated variations on the claim during other media appearances on Monday.

On Monday, Roger Stone, one of Trump’s close friends and advisers, also suggested that Huma Abedin, a longtime aide to Clinton, might be a terrorist operative. “She has a very troubling past,” Stone said on the Breitbart News Daily radio show. “She comes out of nowhere. She seems to have an enormous amount of cash, even prior to the time that she goes to work for Hillary. So we have to ask: Do we have a Saudi spy in our midst? Do we have a terrorist agent?”

Clinton gave her own speech on Monday, in which she decried Trump’s “inflammatory anti-Muslim rhetoric” without mentioning him by name.