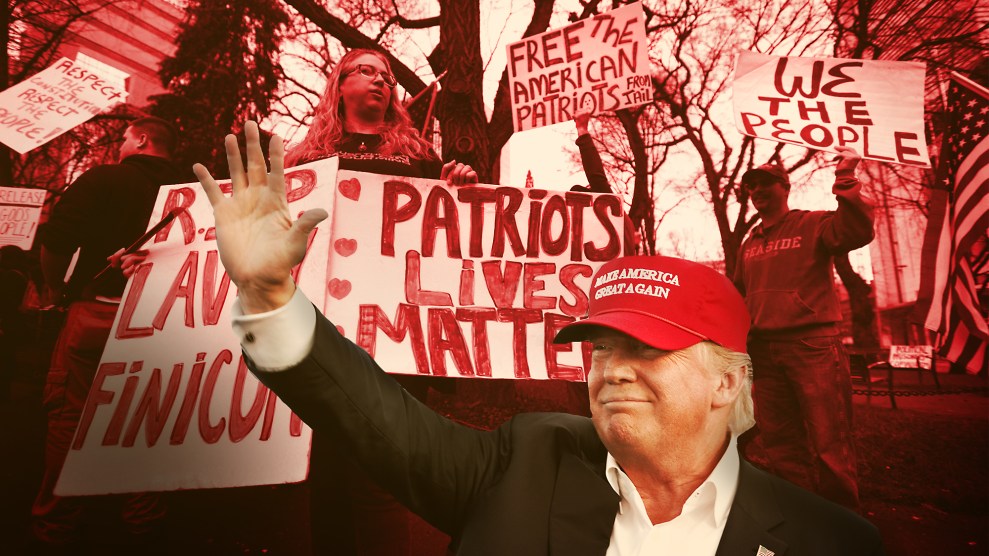 Last December, Donald Trump’s presidential campaign approved David Riden to be a delegate candidate on the Tennessee ballot, and when the state held its primary in March, voters selected Riden to go to the Republican National Convention. When Riden represents Trump there in July, it will not be his first time as a delegate to a political gathering. Seven years ago in Illinois he attended the so-called “Continental Congress of 2009,” where he and other delegates put forth “Articles of Freedom” that called for abolishing all federal firearms laws, replacing the Department of Homeland Security with citizen militias, and, if necessary, launching an insurrection against the federal government.

Riden explains that his views today go even further than those of the Continental Congress of 2009—his involvement in which he says he explicitly disclosed to the Trump campaign when he applied to be a delegate. Riden told Mother Jones in an interview that US leaders who violate the Constitution may have to be done away with: “The polite word is ‘eliminated,'” he said. “The harsh word is ‘killed.'”

Riden said he keeps in contact with a militia group based in Tennessee, though he is not a militia member himself. He said all three branches of the US government are “way off away from the Constitution right now.” Americans may need to attack with assault weapons and bombs in the nation’s capital and elsewhere, he said:

There’s only one reason why the Founding Fathers put the Second Amendment…If the federal government were to follow the path of all other governments, at some point it will turn to tyranny against the people. And at that point, when it stops to uphold and abide by the Constitution—and we’re talking about the Supreme Court, Congress, and the executive branch, all three are way off away from the Constitution right now—the people have the right to assemble, bear arms, go to Washington, DC, or wherever necessary, and go into military battle against the government and replace those in government with individuals that will uphold the Constitution. The Constitution should remain, but the people that are abusing it should be, the polite word is, eliminated. The harsh word is killed. And they’re killed by American citizens with weapons. And if people have tanks, assault weapons, if they have bombs—they need to have the weaponry necessary to be able to overthrow the federal government.

Riden, a retired nuclear engineer, is one among an unknown number of Trump supporters with ties to the Patriot Movement, a loose-knit array of right-wing militias, nativists, and so-called “sovereign citizen” groups. These groups have swelled during the Barack Obama presidency. According to the Southern Poverty Law Center, nearly 1,000 anti-government groups now operate in the United States, including as many as 276 armed militias, which have increased more than sixfold in number since Obama was elected in 2008.

The Trump campaign did not respond to requests for comment.

A different Trump delegate wrote an article, obtained by Mother Jones, that was published in the 1990s by a group opposing the federal government. And that delegate’s son—also a Trump delegate—was arrested recently on federal weapons charges.

Collins A. Bailey of Waldorf, Maryland, who was approved by Trump as a delegate from that state’s 5th Congressional District, wrote an article in 1995 that appeared in the newsletter of a Patriot group called United Sovereigns of America. Back then the militia movement was mushrooming in the aftermath of violent government crackdowns at Ruby Ridge and Waco. Bailey wrote about the Christian beliefs of America’s Founding Fathers: “These were men of conviction, men who had ‘No King But King Jesus.'” Bailey lauded a speech by Patrick Henry about organizing militias against the British, though he made no references to contemporary militias. An accompanying article in the newsletter, however, urged readers to “stockpile food, water, guns and ammunition,” and to “never surrender your weapons.”

Bailey is well known in Maryland Republican politics, having run unsuccessfully for Congress in 2008 and 2010. His campaigns have sounded themes of constitutional fundamentalism popular with the Patriot Movement. “Things are out of control,” he told the Minneapolis Star Tribune in 2008, around that year’s GOP national convention. “We should be a nation of laws under the Constitution; we should have the rule of law, not the rule of man.” Bailey used starker language on his personal MySpace page: “The Second Amendment does not address duck hunting,” he wrote in 2008. “Our Founding Fathers…wisely made many provisions to guard against tyranny, including tyranny from our own government.”

Reached briefly by phone and asked about the 1995 article, Bailey told Mother Jones: “No, we don’t have any ties to any militia groups, and I don’t remember ever submitting that to the organization you’re talking about. And that’s the only comment I can give you.” Then he hung up. (Mother Jones was unable to reach the Oklahoma-based United Sovereigns of America that published the 1995 newsletter; it appears to no longer exist.) 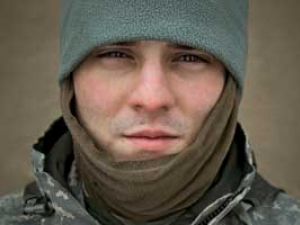 Read our investigation of the Patriot group called Oath Keepers.

By “we,” Bailey was also referring to a question about his son, Caleb A. Bailey, whom the Trump campaign also approved to be a delegate from Maryland to the Republican National Convention. The Trump campaign announced on May 19 that the younger Bailey would be “replaced immediately,” after Mother Jones and other media reported that he was indicted on federal weapons and child pornography charges. Unidentified federal investigators told local TV news station ABC 7 that when they raided Caleb Bailey’s 75-acre gated compound in Waldorf they found a fortified subterranean room under his home stocked with grenades, tear gas, and illegal machine guns.

It is unclear what Bailey’s intentions were for the stockpile, which federal prosecutors further described at a court hearing for him on May 26 as “a vast array of weapons found in an underground bunker.” Among the charges brought against Bailey, prosecutors allege that he attempted to mail ammunition and explosives to an individual in Wisconsin whose identity remains unclear. According to the US Attorney’s Office, “The contents of the package included 119 rounds of reloaded .50 caliber cartridges with M48A1 incendiary projectiles, and 200 rounds of 14.5mm M183A1 spotting projectiles which contain an explosive charge.”

The Bureau of Alcohol, Firearms, Tobacco and Explosives (ATF), which led the raid, declined to comment specifically about the weapons discovered under Bailey’s home. Approached at the May 26 court hearing by Mother Jones and other media, Caleb Bailey’s attorney declined to comment.

The Patriot Movement, after quieting during the Bush years, has returned with a vengeance since Obama became president, animated by conspiracy theories including Mexican plans to “reconquer” the American Southwest and the infiltration of the United States by Muslims. As Obama’s reelection campaign ramped up in 2011, Trump became a ringleader for the conspiracy theory that Obama is not a native-born citizen of the United States. “I want to see the birth certificate,” Trump said on NBC’s Today show. “How come his family doesn’t know which hospital he was born in?” Trump later suggested that Obama might be withholding his long-form birth certificate for fear of revealing that he was born a Muslim. The New York business mogul became so well known for leading this line of attack that Obama (a Christian, born in Hawaii) was moved to rebuke him in what proved a memorable moment at the 2011 White House Correspondents Dinner.

Riden said his wife, an alternate delegate for Trump, agrees Obama is dangerous: “Remember, he is one of them,” she told him. “Meaning he is a Muslim, he is on the side of the terrorists.”

Trump backed off the birther talk once Obama released his long-form birth certificate and Trump’s own presidential campaign began—though when pressed about it by CNN’s Anderson Cooper, Trump continued to float doubts about whether Obama was born in the United States. “I don’t know,” Trump said last July. “I really don’t know. I don’t know why he wouldn’t release his records.”

Birtherism has remained a focus for Riden, the Tennessee delegate for Trump. “I am 100 percent convinced that [Obama] was not born in Hawaii,” he said.

Riden said he listed the Continental Congress of 2009 on the resume he submitted as part of his delegate application to the Trump campaign. He said he also included it among the subjects he wanted to discuss with the media during the Republican National Convention.

“There is no question that [Trump] is giving these groups more fuel,” says Heidi Beirich, director of the Intelligence Project for the Southern Poverty Law Center. Patriot groups have thrilled to Trump’s calls to deport undocumented immigrants and ban Muslim refugees. The leader of the anti-immigrant Minuteman Project, Jim Gilchrist, who recently endorsed Trump for president, hailed him last year for having “unified” the Patriot Movement’s fractious groups: “He is the go-to guy.”

Trump has also courted these constituents with subtler messaging. He criticized Obama for not swiftly evicting an armed group that occupied a federal office in early 2016 in rural Oregon. But Trump also tacitly legitimized the occupiers—led by the infamously anti-government Bundy family—telling the New York Times that if he were president, he would personally invite them to meet with him in Washington.

“This is dog-whistle politics,” says Beirich. “He is directly energizing sections on the extremist right.”

Riden said his wife, Perry Riden, who is an alternate Trump delegate from Tennessee’s 3rd Congressional District, also thinks Obama is dangerous. “My wife looks at me and says, ‘Remember, he is one of them.’ Meaning he is a Muslim, he is on the side of the terrorists, he will…let Iran have nuclear weapons, which would destroy Israel and the United States, because his way of thinking is right in line with Iran, North Korea, and Russia.”

After Mother Jones broke the story in early May that Trump had selected William Johnson, a white nationalist leader, as a delegate from California to the GOP convention, the Trump campaign blamed Johnson’s inclusion on a “database error.” That came not long after Trump refused in a CNN interview to denounce an endorsement from a former head of the Ku Klux Klan. He later blamed that on a “bad ear piece.” Trump has also brushed off criticisms for perpetuating racist and anti-Semitic content spread by his followers on Twitter.

When it comes to Trump answering for his most controversial supporters, says Beirich, “He knows exactly what game he is playing.”