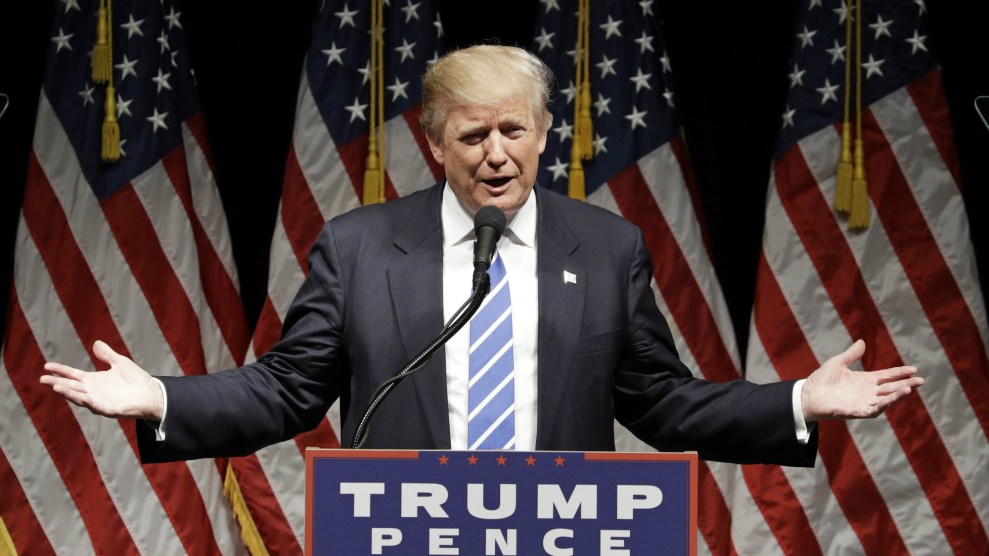 During the first presidential debate, moderator Lester Holt asked Donald Trump about his refusal to release his tax returns, explaining that part of “the reason nominees have released their returns for decades” is so voters can determine if a potential president’s debts reveal any conflicts of interest. “Don’t Americans have a right to know if there are any conflicts of interest?” Holt asked. Trump brushed the question off, saying that “you don’t learn that much from tax returns.” (As the New York Times reported this weekend, just a few pages of Trump’s tax records from 1995 reveal that the GOP nominee may not have paid federal income taxes for 18 years.) He claimed that the personal financial disclosures he had already filed with the Federal Election Commission provided a more detailed overview of his finances, though those records do not reveal income, tax rates, charitable donations, and loan interest payments. “But,” Trump told Holt, “I could give you a list of banks. I would—if that would help you, I would give you a list of banks. These are very fine institutions, very fine banks. I could do that very quickly.”

Mother Jones has been trying to determine Trump’s full roster of creditors, so we immediately contacted his campaign to request the list Trump offered. A week later, we’re still waiting.

Even without the release his tax returns—a standard practice for presidential candidates since the Nixon era—it is clear that, should he reach the White House, Trump would face significant conflicts of interest because of his complex business interests. His personal financial disclosure report provides an incomplete view of his finances. Filed in May, the form lists 16 loans that are valued in vague ranges that make it impossible to determine the total amount he owes. For instance, five of Trump’s loans are valued at $50 million or more. (The FEC doesn’t require anything more specific.) According to this disclosure, Trump owes a minimum of $315 million. But the real amount appears to be much higher. A search of property records throughout the United States shows that those 16 loans are valued, conservatively, at $675 million.

His financial disclosure forms likely do not reveal the full scope of his intricate finances. As the New York Times reported in August, Trump has invested in partnerships that owe nearly $2 billion—loans, including one from the Bank of China, that are not identified within his personal financial disclosure. Trump’s representatives told the Times that Trump would not be liable for those loans, but because he is an investor in the buildings used as collateral for these loans, his investments are certainly linked to the loans.

And Trump’s most recent financial disclosure is already out of date. For instance, Trump reported to the FEC in May that he owed UBS Real Estate, a subsidiary of the Swiss banking giant, between $5 million and $25 million in connection with a loan for commercial property at New York City’s Trump International Hotel and Tower. But Trump no longer has this loan. According to New York City property records, the loan was for $7 million, and his company paid it off with a new $7 million loan from a much smaller lender named Ladder Capital Finance. Trump’s history of failed deals and repeated bankruptcies has made him persona non grata with many of the world’s top banks, forcing him to rely on smaller institutions such as Ladder Capital. According to public documents, Trump currently owes Ladder Capital at least $275 million.

Ladder Capital specializes in packaging loans into larger portfolios that are eventually sold off to other lenders. This is significant because it would be important to know exactly who owns Trump’s debt—a potential source of leverage over a commander in chief. Tax returns would reveal to whom Trump is paying interest. It would be a small step forward in transparency, if the Trump campaign issues a list of his creditors. But the full scope of his finances—and his creditors—will not be known unless he releases his tax returns.