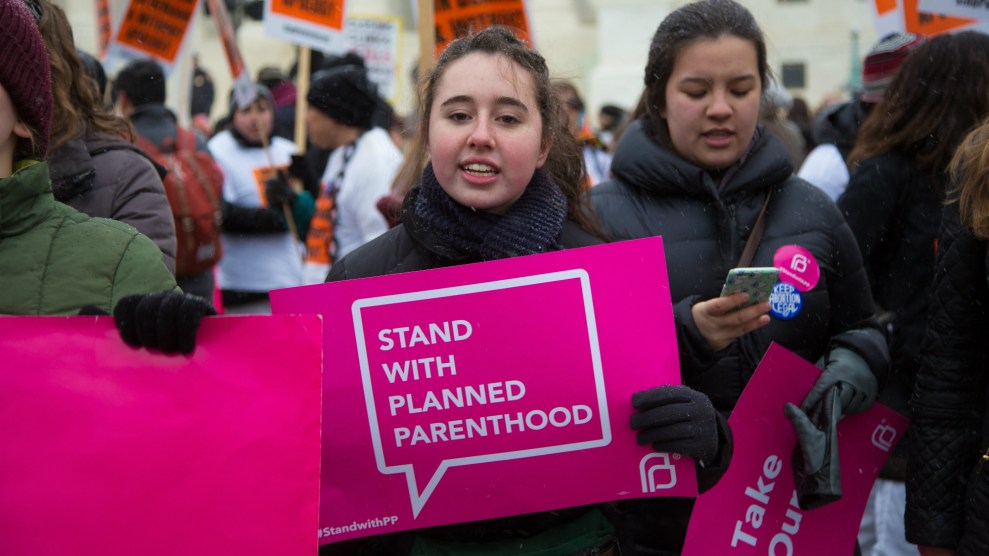 With state legislatures poised to pass an onslaught of new abortion restrictions, reproductive rights advocates are gearing up for lengthy court battles in several states, especially those where Republicans will control all branches of government. One of those is Missouri, where local Planned Parenthood affiliates asked a federal judge this week to suspend two longstanding state abortion restrictions while a lawsuit challenging them works its way through the courts.

On Monday, Comprehensive Health of Planned Parenthood Great Plains and Reproductive Health Services of Planned Parenthood of the St. Louis Region and Southwest Missouri asked US District Court Judge Howard Sachs to block one anti-abortion provision that requires doctors performing abortions to have admitting privileges at local hospitals and another that forces abortion clinics to meet the same structural requirements as ambulatory surgical centers. Passed in 2005, the restrictions—which are generally referred to as “targeted regulation of abortion providers” or TRAP laws—are similar to those struck down in Texas by the Supreme Court’s ruling in Whole Woman’s Health v. Hellerstedt earlier this year.

“My patients face an enormous amount of insurmountable challenges because of state laws that have never taken into consideration their health and safety,” Kristin Metcalf-Wilson, assistant vice president of Health Services at Planned Parenthood Great Plains, told reporters during a press call on Monday. “We are committed to taking this fight as far as we can.”

The Planned Parenthood affiliates are seeking a preliminary injunction that would temporarily end enforcement of the restrictions. The request comes weeks after the affiliates filed an official challenge in federal court, arguing that the Supreme Court’s ruling in the Texas case justifies the reversal of similar laws in Missouri. Calling the hospital admitting privileges and ambulatory surgical center requirements “medically unnecessary” in a November statement announcing the challenge, the lawsuit also notes that the restrictions have forced several abortion providers in the state to close, leaving Missouri with one operating licensed health center offering abortions, a limitation that it says has required women to drive hundreds of miles to a clinic or attempt self-induced abortions.

If the injunction is successful, the Planned Parenthood affiliates hope to resume providing abortions at health centers in Columbia and Kansas City and plan to introduce abortion services at their locations in Joplin and Springfield.

Local advocates don’t expect a ruling on the law until the new year, but the request for an injunction comes during a period of heightened activity from both anti-abortion state legislatures and reproductive rights advocates. The suit arrives at a critical moment for Planned Parenthood, which is likely to face an intense fight over funding when the new, reinvigorated Republican Congress takes office in January. On Wednesday, the Obama administration issued a rule preventing state and local governments from withholding federal funds from Planned Parenthood and other health clinics that provide abortions alongside other family planning and contraceptive services, a move that may complicate legislative efforts to defund abortion providers. Anti-abortion advocates have promised to fight the rule, calling it “a poke in the eye to the now more vocal states that are pro-life and Republican.”