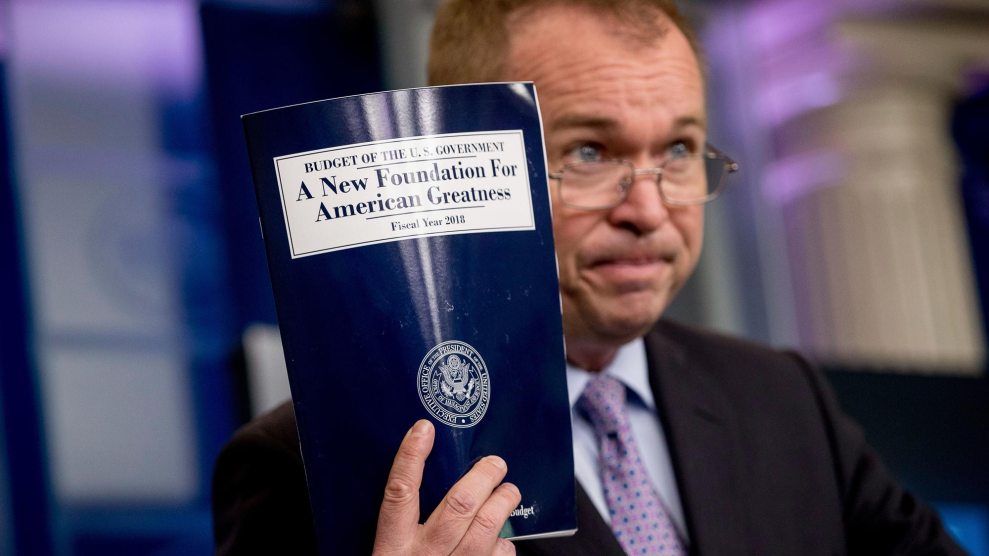 In a plan entitled “The New Foundation for American Greatness,” the Trump administration released their full budget proposal on Tuesday morning, which outlined an extreme schedule of tax cuts for the next 10 years amounting to a total of $3.6 trillion paid for primarily by targeting programs that low-income and middle-class families depend on.

The budget proposes a combination of $1.4 trillion in cuts to nondefense discretionary spending—including a 31 percent cut to the EPA—and drastic cuts to Medicaid and other safety net spending (food stamps, disability insurance, and more), cuts to student loan programs, the repeal of Obamacare, and savings resulting from projected 3 percent economic growth, which most economists believe is impossible. (The Congressional Budget Office projects 1.9 percent.) Economist Larry Summers described the projection as possible “if you believe in tooth fairies and ludicrous supply-side economics.”

Coupled with the administration’s proposed $5.5 trillion tax cut  that disproportionately benefits the wealthy, budget experts are calling this budget proposal a gift to the rich, paid for in large part by knee-capping spending aimed at helping low and middle-income families—a “reverse Robin Hood agenda” according to the left-leaning Center for Budget and Policy Priorities. This budget proposal assumes that economic growth will not only fill the $5.5 trillion revenue gap created by the administration’s proposed tax cuts, but that it will also create an additional $2 trillion in revenue.

This budget must still be approved by Congress. Democrats have said they plan to reject many of its proposals but acknowledge that several may have to be included, perhaps in less drastic form, in order to reach compromise across party lines.

Here’s a glimpse at some of the big ticket items on Trump’s budget wish list:

– An additional $300 million to hire and train 500 new Border Patrol agents and 1000 new Immigration and Customs Enforcement law enforcement and support staff in 2018.

– $214 million for the Department of Justice to hire 75 additional teams of immigration judges.

– An additional $84 million to the DOJ “for increases in the Federal detainee population.”

– Slashes more than $610 billion from Medicaid over the next decade.

– $191 billion in cuts to food stamps, also known as SNAP, over the next decade.

– $21.6 billion in cuts to the temporary assistance for needy families (TANF) program, which provides help to low-income families with children.

– A $40.4 billion reduction over the next decade in spending on the Earned Income Tax Credit and the Child Tax Credit by requiring the use of a social security number to claim the credit—a change that targets undocumented working parents by eliminating their ability to claim the credit even when their children are citizens.

– $72.5 billion in various cuts and changes to the disability insurance program, which provides financial assistance to disabled Americans who can’t work.

– Cutting $27.5 billion over the next decade to eliminate public service loan forgiveness.

– Cutting $38.9 billion over the next decade to eliminate subsidized student loans—loans that are interest-free until a student graduates.

– A $277 million increase in the abstinence education and personal responsibility education programs.

– Nearly $3 billion eliminated from the community development block grant program in 2018. This HUD program funds a variety of housing-related services for low-income communities, including affordable housing services, natural disaster recovery, and the Meals on Wheels program for the elderly.

– Eliminates the $948 million budget of the 2018 HOME Investments Partnership Program. The program gives grants to states to build or renew affordable housing for low-income households.

– A total of $35 billion in cuts in the next decade across various financial regulation programs.

– $6.8 billion in cuts to “restructure” the Consumer Financial Protection Bureau, the agency created in the wake of the 2008 financial crisis to enforce consumer-protection regulations on banks and Wall Street.

Science and the environment