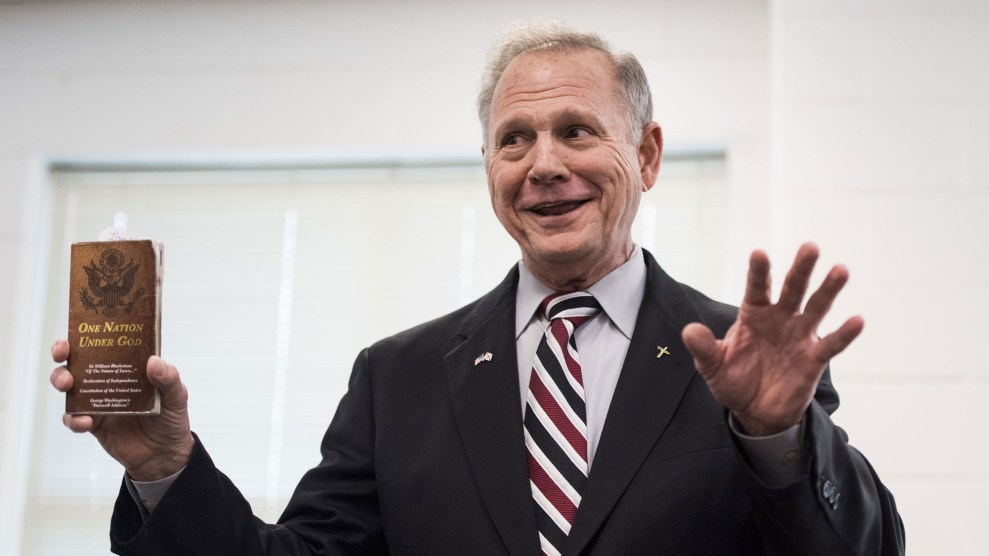 Roy Moore, an anti-sodomy crusader who was once removed from his judgeship for refusing to remove a Ten Commandments monument from his courthouse, just might be heading to the Senate. On Tuesday, Moore, a former chief justice of the state Supreme Court, eased past interim Sen. Luther Strange in a runoff primary to claim the Republican nomination in the race to serve out the rest of Attorney General Jeff Sessions’ term in the Senate. Moore’s win could turn a December special election that was expected to be a walk for Strange into an unexpected opportunity for Democrats to poach a Senate seat in the Deep South—an idea that gained traction in recent days with Strange himself. The result will also revive a question that could haunt Republicans for the foreseeable future: Just how far can Trumpism go before it breaks?

Moore has spent most of his career oscillating between gadfly, provocateur, and pariah. In 2006, three years after his removal from office, he ran for governor and won 33 percent of the vote. In 2010, he ran for governor and got 19 percent of the vote. In 2012, he ran for president—no really, he did. When that fell through, he ran for his old spot on the Alabama Supreme Court and won—only to be suspended in 2016, this time for refusing to comply with the US Supreme Court’s recognition of same-sex marriage. The expectation heading into the special election was that Moore was catnip for a certain part of the Republican base, but a punchline to almost everyone else. Sound familiar?

Alabama voters were smart enough to recognize that Moore was the real Trump candidate.

Although Trump ultimately endorsed Strange, Alabama voters were smart enough to recognize that Moore was the real Trump candidate. Moore, who had taken to driving his Ten Commandments monument around the state in his truck after being kicked out of office in 2003, wielded a gun at his Monday night campaign rally and rode to the polls Tuesday on horseback. He dropped racial slurs on the campaign trail. He said Shariah law had taken over parts of Indiana—Indiana!—and again and again pointed out how little Senate Republicans have accomplished this year. He is a birther. Still.

Trump may have backed “Big” Luther, but his heart wasn’t in it. At an appearance in Huntsville on Friday, the president emphasized that Strange had been way down in the race when Trump intervened, and said he would happily back Moore were the judge to win the nomination. He bizarrely claimed that Strange “doesn’t know Mitch McConnell at all”—even though McConnell’s super-PAC was spending millions of dollars on Strange’s behalf. In fact, Trump seemed to know little about the man he was campaigning for, apart from the fact that he is very tall. “He should be on the New York Knicks!” Trump said of Strange. He couldn’t even pick a winner there.

While Trump was making a mess of his endorsement speech, the president’s effort was being undone by his own acolytes. Secretary of Housing and Urban Development Ben Carson endorsed Moore. Former Trump consigliere Steve Bannon joined onetime White House aide Sebastian Gorka—and for some reason Brexit champion Nigel Farage—in stumping for Moore. Trump’s attempt to play kingmaker, as with everything else the White House has engaged in, was undone by the administration’s inherent chaos—timidly obliging the congressional Republicans with one hand while sabotaging any efforts at success with the other.

With Moore on the general election ballet, might Alabamians actually vote for the Democrat?

Moore’s victory was a consequence of the forces that elected Trump, not a rejection of them. But it was also an ominous sign of a reckoning to come for Republicans. It is possible, perhaps even easy, to convince voters that your policies won’t do what what your opponents say they will—Trump has made an art form out of exactly that. But it is more difficult to sustain the lie that something that has happened has not, or that something has not happened when it actually has. At some point people will have health care or they won’t. Their job prospects or their lives will have improved or they won’t have. In Alabama, Trump asked voters to look at Strange’s record, and evidently that’s what they did.

Moore’s presence on the general election ballot now leaves Alabamians in an unusual position. Might they actually vote for a Democrat?

Moore wouldn’t be the most radical figure ever to serve in the Senate, but as a theocrat he has few peers. As a judge he ruled that being gay was grounds for losing your kids in custody cases, while calling homosexuality “abominable, detestable, unmentionable, and too disgusting and well known to require other definition or further details or description.” CNN’s Andrew Kaczynski dug up audio of Moore arguing that 9/11 was divine punishment for America’s embrace of sodomy and abortion. A man of his word, in 2005 Moore said homosexuality should be illegal. And lest anyone think he has experienced some personal evolution, he warned at his one-on-one debate with Strange last week that America is afflicted with “crime, corruption, immorality, abortion, sodomy, sexual perversion,” and the threat of “transgender troops in our bathrooms.” (He’s also written that Muslims should not be allowed to serve in Congress.)

If there’s one enduring lesson from 2016, it’s the incredible stickiness of partisanship.

On the Democratic side, there is Doug Jones, who has never done any of those things. Jones is a well-connected former US attorney from Birmingham whose most notable contribution to public life was the prosecution, in 1997, of two of the men who bombed the 16th Street Baptist Church in 1963. Cautiously, some Democrats have entertained the idea Moore may be odious enough to keep enough Republicans at home or compel them to jump ship, and that Jones is a respectable enough candidate to make it a close race. (There are some grounds for optimism. In the 2015 Louisiana governor’s race, Republicans abandoned Sen. David Vitter en masse amid a revived prostitution scandal, allowing Democrat John Bel Edwards to take office.) The Dems might as well try.

But if there’s one enduring lesson from 2016, it’s the incredible stickiness of partisanship. Alabamians voted for overwhelmingly for a New Yorker who had admitted to sexual assault; barring a miracle they’ll probably also vote overwhelmingly for a judge who has been removed from his job twice and thinks America’s greatest threat is sodomy. If that happens, there’s no reason to think the Republicans in Washington, DC, won’t follow suit. After all, it’s Trump’s party now.