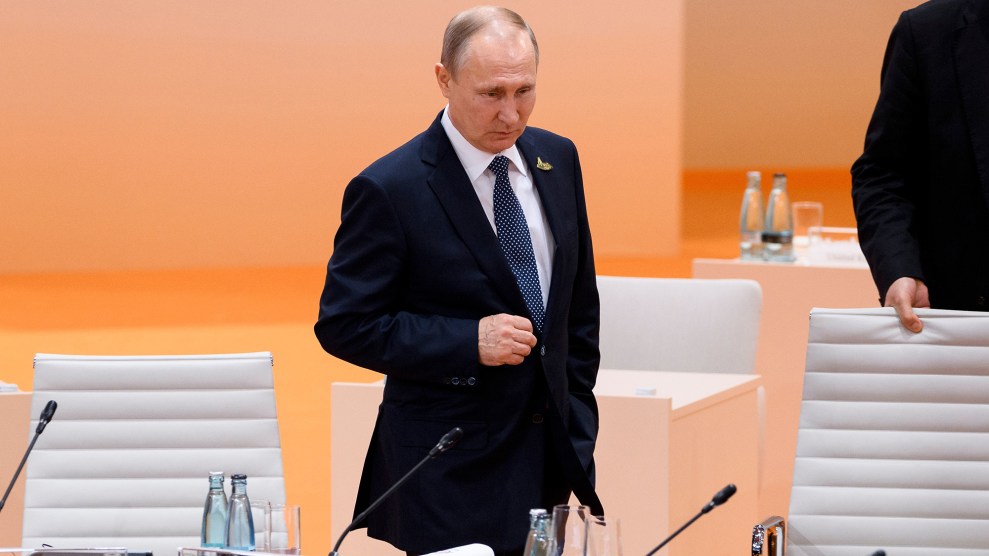 Beyond what might obviously motivate a longtime adversary of the United States, what explains Vladimir Putin’s brazen attack on the 2016 US election?

A freshly updated edition of the 2015 book The Red Web: The Struggle Between Russia’s Digital Dictators and the New Online Revolutionaries, by two highly credible Russian investigative journalists, makes a compelling case that Putin had some very personal skin in the game. According to authors Andrei Soldatov and Irina Borogan, Putin was enraged by an investigative report on his vast hidden wealth that was based on an unprecedented leak of documents known collectively as the Panama Papers. The massive project from the International Consortium of Investigative Journalists (ICIJ), which would later win a Pulitzer Prize, was published by consortium members beginning on April 3, 2016. By then, the ICIJ had already been specifically targeted by Putin. (Disclosure: ICIJ was previously a project of the Center for Public Integrity, where I was formerly executive director.)

As revealed in the Guardian and Süddeutsche Zeitung, and elsewhere when the project rolled out, Putin’s close friend, a Russian cellist named Sergei Roldugin, had moved some $2 billion through a web of offshore accounts that could be traced back to the Russian government. The documents were part of a staggering 2.6 terabytes of data (11.5 million files) leaked from the Panamanian law firm Mossack Fonseca, which set up thousands of secret offshore accounts for its clients, including Russian oligarchs and government officials.

“It appears clear now that Putin thought we were part of an American plot,” says the head of the Panama Papers investigation.

“Worse,” the “Red Web” authors told the Washington Post in an interview about their updated reporting, “Putin believed the Panama Papers attack was sponsored by Hillary Clinton’s people—this, in a way, provided him with a ‘justification’ for a retaliatory operation.”

This interpretation by Putin appears to be reflected in how he went after the producers of the Panama Papers: The Kremlin’s public response to the bombshell exposé in fact began the week before any of the material was published. As is normal investigative journalistic practice, ICIJ reporters had approached the Kremlin to ask about the apparent $2 billion of Putin’s hidden wealth. The Kremlin gave no response to them but immediately went on the attack.

“Kremlin accuses foreign parties of Putin smear campaign before elections,” announced a Guardian headline on March 28, 2016, six days before the Panama Papers were published. “The Kremlin has lashed out at unidentified foreign governments, organisations and media for allegedly seeking to disrupt upcoming polls and taint president Vladimir Putin’s reputation.” Putin’s spokesman Dmitry Peskov told reporters that ICIJ was preparing “an information attack” aimed at damaging Putin’s reputation, and it was “an undisguised paid-for hack job” on Putin’s private life, his family and friends. Peskov also claimed without providing any evidence that ICIJ included members of various security services.

ICIJ is made up of hundreds of respected news organizations and investigative journalists from around the world and has more than a 20-year record of credible work. The organization’s director, Gerard Ryle, who led the Panama Papers project, told me, “It appears clear now that Putin thought we were part of an American plot. Nonsense, of course.”

Four days after publication of the Panama Papers, Putin dismissed the reports as “one more attempt to destabilize the internal situation” in Russia and declared that there was no proof of corruption in the documents. According to the Guardian, citing Russian news agencies Interfax and Tass, Putin said his cellist friend Roldugin spent “almost all of the money he earned on acquiring musical instruments from abroad and bringing them to Russia.”

The next day, according to Red Web authors Soldatov and Borogan, there was a special meeting of the Russian Security Council, “when Putin urgently gathered only the most trusted officials—most of them with secret services background.” That was where “the need for a retaliatory response to the Panama Papers exposés” was most likely discussed and set in motion, the authors say.

A week later, on April 14, 2016, Putin brought up the Panama Papers again on a Russian radio and TV broadcast, according to Soldatov and Borogan: “Who is engaged in these provocations? We know that there are employees of official U.S. Agencies.”

By then, Trump was accelerating toward the Republican nomination and Hillary Clinton was a heavy favorite for the Democrats. Russian hackers had already been at work inside the Democratic National Committee’s computer network, gaining access to Clinton campaign chair John Podesta’s email by that March. According to the scenario detailed in the Red Web, from mid-April on Putin appeared to step up the Kremlin’s cyberwarfare against Clinton and on behalf of Trump.

It wasn’t until just weeks before the vote that US intelligence officially accused the Russian government of directing the hacking operation against the DNC. “We believe, based on the scope and sensitivity of these efforts,” Homeland Security said in a statement in early October, “that only Russia’s senior-most officials could have authorized these activities.”