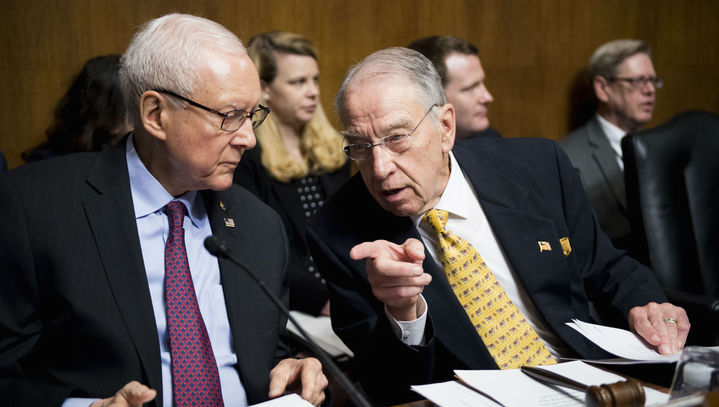 President Trump has already experienced great success filling court vacancies during his first year in office, but on Wednesday his quest to wholly reshape the federal judiciary took one potentially disturbing step forward. This morning, David Stras, a judicial nominee for the Eighth Circuit Court of Appeals, faced questions before the Senate Judiciary Committee in spite of the fact that he did not receive a so-called “blue slip” from one of his home-state senators, Al Franken (D-Minn.)—breaking with a century old practice.

The blue slip process is a longstanding tradition—not a law—designed to ensure meaningful consultation between a presidential administration and senators over potential federal judges. Under the system, senators from the judicial nominees’ home states are asked to sign slips of approval before the confirmation process can continue. When a senator refuses to return a blue slip, the act typically blocks the nominee from moving ahead. It is one of the few levers available to both parties to block objectionable nominees.

The decision to push Stras forward without Franken’s blue slip was announced earlier this month by the Senate Judiciary Committee chair, Senator Chuck Grassley (R-Iowa): “I won’t allow the White House to just steamroll home state senators but, as I’ve said all along, I won’t let the blue slip be abused.” At the time, Grassley insisted he was not doing away with the blue slip process altogether, but choosing not to apply it in this instance because Stras is, in his view, “well qualified.”

“I won’t allow the White House to just steamroll home state senators but, as I’ve said all along, I won’t let the blue slip be abused.”

This is not the first time a Judiciary Committee chair has made an exception to the blue slip tradition, as Senator Ted Cruz (R-TX) noted during this morning’s hearing. “In [this past] century only two chairmen of the Judiciary Committee have treated the blue slip as an absolute veto barring a hearing,” he said. He pointed out that even former committee chair Joe Biden viewed “a negative blue slip” as a “significant factor to be weighed by the committee, but that it would not preclude consideration of the nominee.”

But Chris Kang, who oversaw judicial selection for four years under President Obama, says it’s important to pay attention to how exceptions are being made: Three out of the last four Republican Judiciary Committee chairmen, including Grassley, have advanced nominations without Democratic senators’ sign offs. No Democratic Judiciary Committee chair, on the other hand, has ever moved ahead with a nominee without a Republican’s blue slip. (Biden’s exceptions were made over objections from Democratic senators.) Republican senators blocked judges with blue slips 18 times under President Obama and were able to effectively keep those judges from being seated.

Grassley’s move, Kang argues, effectively establishes himself “as the sole decider” of when and how the rule will apply. “It’s his personal judgement now whether the White House has consulted with the home state senator,” Kang tells Mother Jones. “Once you make an exception the rule is gone.”

Democrats haven’t been shy about their frustrations. “Chairman Grassley’s decision do away with a 100-year old Senate tradition just 10 months into the Trump administration couldn’t be more troubling,” Senator Dianne Feinstein (D-CA) wrote in a statement earlier this month. “The lengths to which Republicans are going to jam extremely conservative and controversial nominees through the Senate is unprecedented. What’s happening is diminishing the Judiciary Committee and the Senate and undermining the independence of the federal judiciary.”

“The Trump administration has been in office for less than one year,” Feinstein said in the hearing on Wednesday. “No president has had as many circuit court nominees confirmed in their first year since Richard Nixon. Of the nine circuit court nominees that have been confirmed, all had their blue slips returned and five were from Democratic senators. The Democrats on this committee are simply asking for blue slips to be respected.”

While it’s too early to say definitively whether Stras is in fact just one exception to the rule or the beginning of the end of the blue slip tradition, what is clear is that the Trump administration is incredibly keen on getting him to the federal bench. Like many of Trump’s nominees, Stras is young—43-years old—and has deep connections to the Federalist Society. He has served on the Minnesota Supreme Court since 2010 and, in May of 2016, his name appeared on a list of potential Supreme Court nominees that then-candidate Trump published—a detail that has factored into Senator Franken’s objections regarding the judge.

Franken announced his decision not to return a blue slip for Stras in September, writing that he “would be a deeply conservative jurist in the mold of Supreme Court Justices Clarence Thomas and Antonin Scalia, justices who the nominee himself has identified as role models.” He also expressed frustration that the White House seemed to have settled on Stras before consulting him and “nominated him despite the concerns [he] expressed.”

“When the pendulum swings and there will be a Democratic president with a Democratic Senate, I imagine these senators will want a say and will want to be consulted.”

“Justice Stras, I want [you] to understand that my objection here was not at all about you personally,” Franken said toward the end of Stras’s questioning on Wednesday, before elaborating that his most serious concern was with Stras’ inclusion on Trump’s Supreme Court short list, which was compiled with the help of organizations like the Federalist Society and the Heritage Foundation. “These are deeply deeply conservative interest groups,” he said. “[They] have very well defined views on issues like affirmative action…or reproductive rights. And I’m confident they would not have included you on the list of potential Supreme Court nominees if your views on those issues were not known to them.”

Stras will respond to further written questions from the committee’s members before they vote on putting his nomination before the full Senate for a final vote. That will be the ultimate test for Republicans, says Dan Goldberg, legal director of the Alliance for Justice: “We hope that there are enough principled Republicans who will stand up for the Senate as an independent institution and will stand up for a 100 year old tradition.”

“And besides standing up for principles, they should stand up for their own rights,” he explains. “When the pendulum swings and there will be a Democratic president with a Democratic Senate, I imagine these senators will want a say and will want to be consulted.”

It’s clear that the White House isn’t too concerned about Stras’s confirmation: On November 17, the White House released an updated list of potential Supreme Court nominees; it again included Stras, but accidentally already listed him as a judge on the US Court of Appeals for the Eighth Circuit.