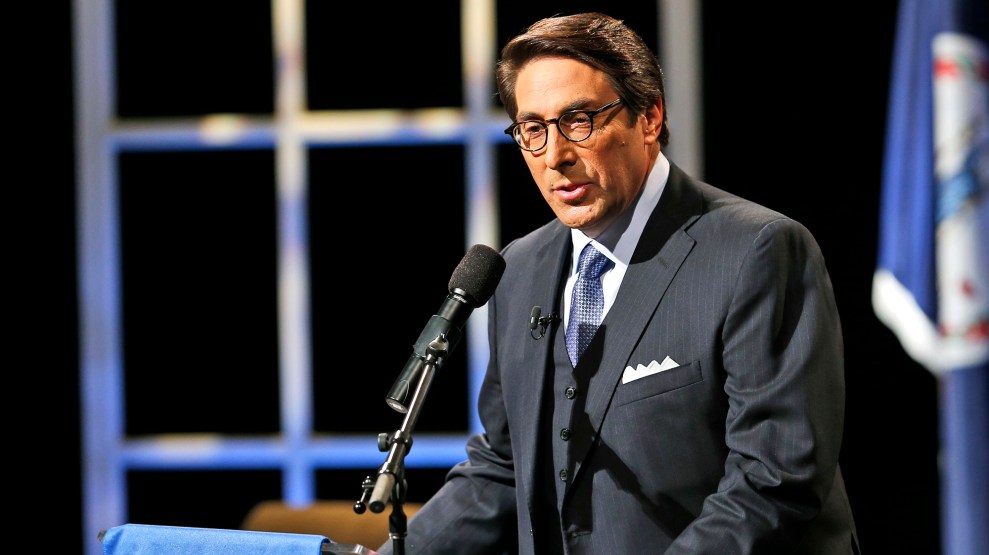 Jay Sekulow at Regent University in Virginia in 2015. Steve Helber/AP

It’s a common gripe among reporters and government watchdogs that the federal government seems to ignore, stall on, or wrongly deny their requests for government records. Requests under the Freedom of Information Act (FOIA) are piling up at federal agencies, and federal courts are contending with a spike in FOIA litigation as the media and nonprofits turn to the courts in their pursuit of these records. Even President Donald Trump’s personal lawyer has been stymied by the process.

Jay Sekulow, a member of Trump’s personal legal team since last June, has five pending FOIA lawsuits against the Justice Department and State Department. The suits were all filed in 2016 on behalf of the American Center for Law and Justice (ACLJ), an evangelical legal nonprofit where he serves as chief counsel.

In addition to defending Trump in the probe into Russian meddling in the election and possibly obstruction of justice by the president, Sekulow has also been trying to obtain information about the Obama administration and the Clintons through the FOIA process. Sekulow’s lawsuits were filed during the previous administration, but they now challenge the administration of his boss. In one suit, he alleged a conspiracy by the State Department to thwart public records requests.

The FOIA backlog Sekulow rails against in his lawsuits has only worsened in the first year of the Trump administration. In 2017, FOIA lawsuits against the federal government jumped 26 percent, according to the FOIA Project, housed at Syracuse University’s Transactional Records Access Clearinghouse. Sekulow’s continued struggles to obtain documents make him one of a growing number of litigants over the issue. But whereas much of the new FOIA activity is spurred by journalists and nonprofits seeking to understand the Trump administration, Sekulow appears to be looking for wrongdoing by the Obama administration as well as the so-called “deep state” bureaucracy that conservatives believe is working against Trump.

In one of the cases, Sekulow and other attorneys representing ACLJ are seeking Justice Department documents pertaining to the impromptu meeting between former Attorney General Loretta Lynch and former President Bill Clinton in a plane on the tarmac in Phoenix in 2016. The incident generated theories from many on the right that Clinton and Lynch worked out a deal on the investigation into Hillary Clinton’s use of a private email server.

Parts of the complaint will be familiar to journalists and nonprofits who struggle with the government’s lack of responsiveness to their requests. The Justice Department “has refused to even acknowledge Plaintiff’s FOIA request and Plaintiff’s request for expedited processing,” states a November 2016 complaint, filed days before the presidential election. The outcome of the election didn’t put an end to Sekulow’s litigation. In the latest filing in the case, filed last month, he argues that the department’s “attempt to shield from the public facts surrounding AG Lynch’s secret meeting is unprecedented and flies in the face of the clear, unequivocal mandate of FOIA.”

The ACLJ was founded by evangelical pastor Pat Robertson in 1990 and is known for advocating anti-LGBT, anti-abortion policies. As Mother Jones reported in 2012, Sekulow and the ACLJ opened offices in Africa that lobbied for homosexuality to remain illegal in Zimbabwe and for the elimination of a Kenya law that allows abortions when a woman’s life is at risk. Sekulow and his family members have made millions in salaries and payments to companies they own through the ACLJ and its affiliated charities they control. In FOIA lawsuits, the ACLJ describes part of its mission as government transparency and accountability. Its website has a page dedicated to “government corruption,” where it posts commentary about the latest conservative scandals, including the latest developments in the Russia probe. Several posts on the website describe the ongoing FOIA suits as a crusade against the “deep state.” The ACLJ “will continue fighting the deep state DOJ in court over its constant stream of excuses,” one post promised last month.

Sekulow’s other four outstanding FOIA lawsuits are against the State Department. In June 2016, he filed a lawsuit seeking records about a 2013 State Department press briefing video, a portion of which was deleted in what the department called a “glitch.” Two months later, he sued for records on how the State Department had sought to protect Christian victims of ISIS. In October 2016, Sekulow sued for information related to the possibility of State Department work on behalf of Clinton Foundation donor Gilbert Chagoury, and whether Clinton’s top aides offered a job or other favor to someone—a mystery person whose name was redacted from a previous public disclosure—potentially connected with the Clinton Foundation. In December 2016, he filed a suit seeking records about State Department grants to two groups that campaigned against the 2015 reelection of Israeli Prime Minister Benjamin Netanyahu.

In most of the cases, Sekulow filed suit shortly after the 20-day deadline for a FOIA response, leaving the State Department little time to gather the data responsive to his FOIA requests. In each complaint, he cites a Justice Department study finding that, as he put it, the State Department took “111 days on average to respond to FOIA requests in 2014, far longer than any other agency and the time specified by statute, and that only 10 percent of Defendant’s FOIA officers took required training, the worst attendance record of any major agency.”

Sekulow, the judge implied, was frustrated like so many journalists by the failure to respond to FOIA requests, but he wasn’t the victim of a conspiracy.

By the time he filed his third suit in October—one seeking records on the Clinton Foundation donor’s interactions with the department—Sekulow sounded exasperated. “This is Plaintiff’s third FOIA lawsuit against this Defendant in the past approximately three months,” the complaint states. “Defendant has a reputation for flaunting and disregarding its public accountability and FOIA obligations.”

By his fourth suit, Sekulow decided to take his complaint a step further. Not only did he ask the court to compel the release of the records he sought, he also claimed that the department had unlawfully adopted an undisclosed policy of not responding to FOIA requests unless compelled to do so in court. He asked the judge to order the State Department to “cease its impermissible practice of untimely and noncompliant responses to FOIA requests.” This additional claim came with an attempt to go through the discovery process to find evidence of this secret policy.

On January 30, a federal judge rejected Sekulow’s claim of a secret State Department policy of noncompliance with FOIA, finding no evidence to support it. The judge likewise denied his request to uncover additional information through the discovery process, saying it would be “little more than the proverbial fishing expedition.” Sekulow, the judge implied, was frustrated like so many journalists by the government’s failure to promptly respond to FOIA requests, but he wasn’t the victim of a conspiracy.

Sekulow did not respond to a request for comment.