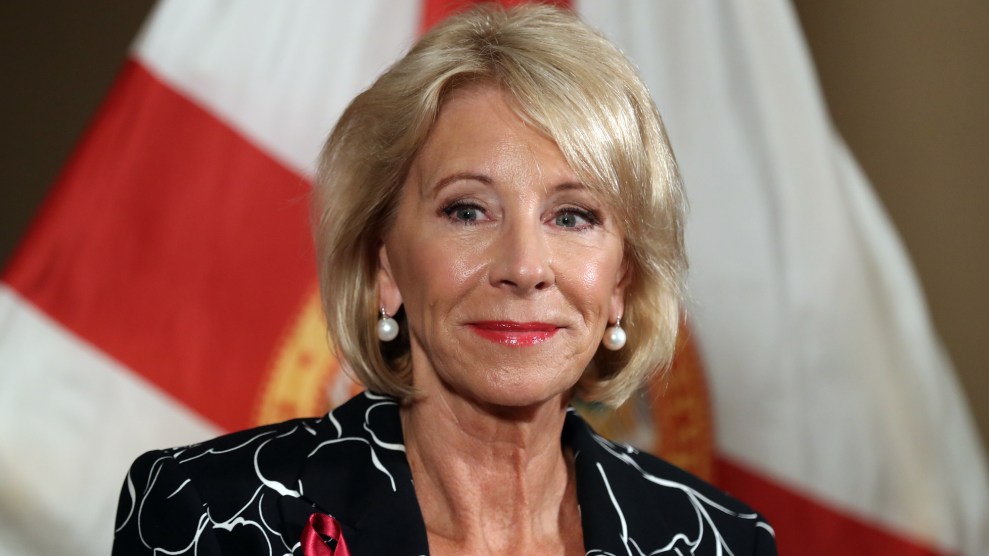 On Wednesday, education secretary Betsy DeVos toured Marjory Stoneman Douglas High School and met with students and faculty weeks after they survived a mass shooting that left 17 dead at their school. She said she saw therapy dogs, talked to “a small group of students that are having a particularly tough time,” and let students who worked with the school newspaper trail her.

After the visit, she held an eight-minute press conference. When asked about her support for the idea of letting teachers carry firearms in schools, DeVos said that interpretation was an “oversimplification” and that schools should consider marshal programs like the one in Texas as a model, noting that it may not be for everybody.

Education Secretary @BetsyDeVosED only answered around five questions during her press conference here in #Parkland #Florida I was lucky enough to get one of them along with a follow up. You can watch here https://t.co/6IWW7kn0Jr #BetsyDeVos

DeVos answered a few more questions, including one about her plans to improve school safety. “It’s appropriate to take a robust inventory of what states are doing and what local communities are doing and elevate those things that are working well,” she said. She didn’t elaborate on specific proposals.

After the press conference, journalists and students took to Twitter to express their confusion and frustration:

DeVos leaves the press room after answering only a few questions following her visit to MSD:

That's all, folks. I'll be looking to see what @car_nove and #MSDstrong Eagle Eye reporters write.

Betsy Devos came to my school, talked to three people, and pet a dog. This is incase the press tries to say something else later

Do something unexpected: answer our questions. You came to our school just for publicity and avoided our questions for the 90 minutes you were actually here. How about you actually do your job? #neveragain #DoYourJob https://t.co/4Ts0INq0gR

An editor at the student newspaper denied that DeVos let students follow her:

One student from each publication (tv prod./newspaper/yearbook) was able to see her and take pictures of her, no one followed her. We are part of a school publication and it's our job to report on a public figure visiting the school. https://t.co/zE48UAFZky

Meanwhile, Miami Heat superstar Dwyane Wade showed up at Stoneman Douglas after DeVos made her appearance, much to the surprise of students.

I just had a great conversation with some of the students at Stoneman Douglas High School about some important/impactful things that they have planned. I’m looking forward to being more involved in the change that they WILL create. #MSDStrong 💪🏾💪🏾💪🏾

Thanks for all the love & support for MSD, @DwyaneWade. I can’t say the same for you, @BetsyDeVosED. #MarchForOurLives

So apparently Dwayne Wade is at my school. If I only got see Betsy Devos and I don’t get to see Dwayne I’ll be pissed 😂