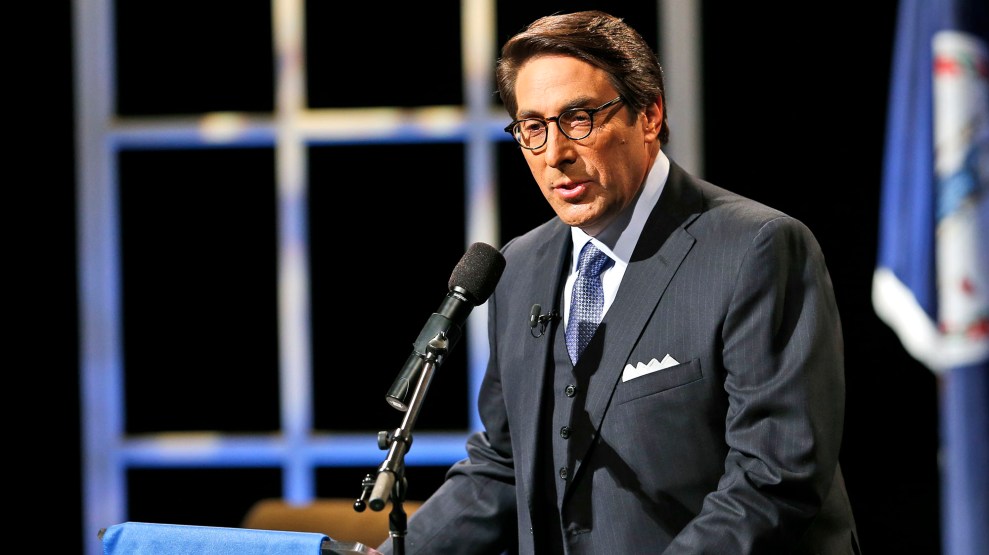 Attorney General Jeff Sessions said Wednesday he is considering bowing to demands from congressional Republicans who have called for the appointment of a second special counsel—this time to investigate supposed misconduct by the Justice Department and the FBI in probing ties between former Trump campaign officials and Moscow.

Democrats have argued that such calls are simply an effort to undermine the ongoing Russia investigation. Sessions, moreover, has a serious ethical problem he refuses to acknowledge: He has already recused himself from anything involving the Russia probe, as well as from anything involving the 2016 Trump and Clinton campaigns. Appointing and overseeing a special counsel assigned to investigate conduct related to the Russia investigation would seem to be a direct violation of that recusal.

“I don’t think he needs to recuse himself from this.”

Enter President Trump’s lawyer, who took to his radio show Thursday to urge Sessions to make the appointment and to repeatedly insist that Sessions’ recusal shouldn’t stop him from doing so. “I don’t think he needs to recuse himself from this,” said Jay Sekulow, a member of Trump’s personal legal team in the Russia probe. Sekulow is also the chief counsel for the conservative American Center for Law and Justice, and he hosts a weekday radio show that he’s used to attack the Mueller investigation.

On Tuesday, Republican Reps. Bob Goodlatte (Va.) and Trey Gowdy (S.C.) sent a letter to Sessions asking him to appoint a special counsel to investigate the FBI and Justice Department’s conduct in 2016 and 2017. The letter builds on allegations by some House Republicans that the Mueller investigation is tainted because, they claim, the FBI used illegal means to obtain a FISA warrant to surveil former Trump campaign adviser Carter Page. This claim was the centerpiece of the controversial memo created by Rep. Devin Nunes (R-Calif.), the chairman of the House intelligence committee. (Like Sessions, Nunes had already recused himself from the Russia probe.)

A memo released by Nunes’ Democratic counterpart, Rep. Adam Schiff (D-Calif.), debunked many of Nunes’ allegations. Nonetheless, Goodlatte and Gowdy singled out the warrant issue in calling for a special counsel. Without saying so explicitly, their letter also suggests that the new special counsel could investigate the DOJ and FBI’s decision not to prosecute Hillary Clinton in the summer of 2016.

On Wednesday night, Sessions gave an interview to Fox News’ Shannon Bream, in which he said he was indeed considering appointing a second special counsel. “I have appointed a person outside of Washington, many years in the Department of Justice, to look at the all allegations the House Judiciary Committee members sent to us, and we’re conducting that investigation,” Sessions said, adding that he has great respect for Goodlatte and Gowdy.

The fact that Sessions has already recused himself from the matters this new special counsel would investigate never came up during the Fox interview; Bream never asked him how he could possibly oversee such an investigation without violating that recusal. This is nothing new for Sessions. Experts say he appears to have repeatedly violated his recusal pledge over the past year. Additionally, he repeatedly meddled in the Russia investigation by making comments apparently intended to discredit the probe.

On his radio show Thursday, Sekulow echoed calls for  Sessions to appoint this second special counsel and dismissed the idea that Sessions’ recusal would get in the way. “This is completely independent of what Bob Mueller is doing on the Russia inquiry,” he said, stressing that he was directing his comments to any reporters listening. “It’s completely separate. This is involving the FISA issues.” He went on to add that it could also include an investigation into Clinton’s emails and the bogus “Uranium One” Clinton scandal—both of which Sessions is supposed to be recused from.

But in the course of the show, Sekulow and his co-hosts made comments that seemed to confirm that the investigation they were calling for would, in fact, have an impact on the Mueller investigation. The proposed new special counsel could investigate “potential criminal conduct involved in, one, the Clinton investigation; two, what then led to the Russia investigation and the Trump campaign, because it was the same actors, and the FISA abuse,” Sekulow’s son, Jordan, said on the show. Jay Sekulow agreed.

“Department of Justice has an opportunity to start cleaning house,” Jordan Sekulow said later in the show. “It involves the Clinton investigation, the Trump-Russia investigation.”

Through it all, Jay Sekulow continued to advise Sessions that his recusal would not be violated. “I do not think he’s conflicted out,” he said.