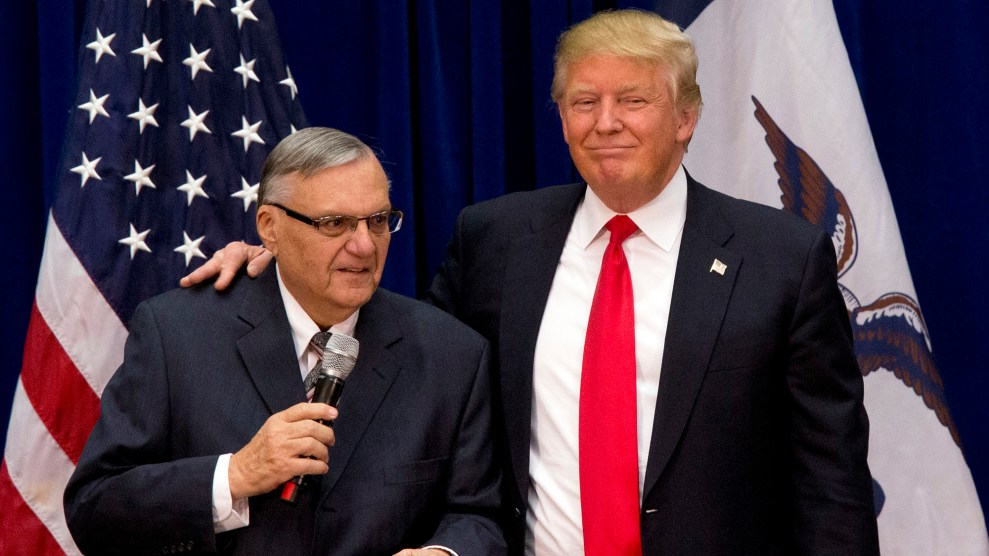 President Donald Trump has attacked the judiciary since his 2016 campaign, from the “Mexican” judge who presided over a case against Trump University to the “so-called judge” who blocked his travel ban last year. Mostly, it’s been just talk (or tweets). But in one case, Trump’s saber-rattling threatens to escalate into a power struggle between two equal branches of government that could have major implications for civil rights enforcement and even the investigation into possible collusion between Russia and Trump associates in the 2016 election.

Last year, Trump pardoned Joe Arpaio, who made a name as the country’s most infamous sheriff for racially profiling Latinos and arresting them on suspicion of lacking legal status. Now, in a little-noticed case, the courts could toss out that pardon, and with it the notion that the president’s pardon power is unlimited. If instead they uphold the pardon, as many observers expect, that could send two powerful if ominous messages: that law enforcement officials can violate the Constitution’s protections against things like racial discrimination and still gain presidential absolution, and that people caught up in the Russia investigation can refuse to cooperate with court orders without penalty if they have the president’s backing.

Arpaio, now a Republican candidate for the US Senate in Arizona, spent 24 years as the sheriff of Maricopa County, where he directed his officers to target Latino drivers in the Phoenix area and unlawfully detain people suspected of being undocumented, often in tents in the triple-digit desert heat. He famously dressed male inmates in pink underwear and bragged that the food he served was rotten. In 2011, a federal district court ordered Arpaio to stop arresting people suspected of being undocumented; two years later, the same court found that he had discriminated against Latinos and violated the 2011 order to stop targeting them. But Arpaio’s discriminatory policies continued. Finally, last year, a federal judge found him guilty of criminal contempt of court. But before he could be sentenced, Trump swooped in and pardoned him last August.

After his pardon, Arpaio asked the court to vacate the contempt judgement against him. The district court halted its proceedings against Arpaio but refused to clear his record. So Arpaio appealed. In the coming months, the 9th Circuit Court of Appeals will have an opportunity to review the case and potentially overturn a presidential pardon for the first time in more than a century.

Trump’s saber-rattling threatens to escalate into a power struggle between two equal branches of government.

The Trump presidency is already testing the outer bounds of the pardon power in ways never contemplated during past administrations. The multiple criminal investigations into Trump’s campaign, businesses associates, and perhaps the president himself have raised new questions about the scope of the pardon power. Can Trump use it to thwart investigations against him? Could he pardon himself? In Arpaio’s case, Trump has “pardoned someone specifically for flouting judicial authority,” says Lisa Kern Griffin, a professor at the Duke University School of Law, “which may be precisely what he is going to expect some of his associates to do in order to protect him.”

But some scholars see a different problem with the Arpaio pardon: It nullified the role of the courts to protect Americans’ civil rights. The pardon power, as laid out in the Constitution, is virtually unlimited. But in the case of Arpaio’s pardon, some prominent constitutional scholars believe the president exceeded his authority by overriding the constitutional rights of Arpaio’s victims.

When Trump pardoned Arpaio, Martin Redish, a constitutional expert at Northwestern University’s law school, had just completed a book on the importance of an independent judiciary to safeguard constitutional rights. He saw Arpaio’s pardon as the perfect cautionary tale. The night before Trump officially pardoned the former sheriff, Redish penned a New York Times op-ed laying out the case for why the rumored pardon was unconstitutional. His argument was simple: The government cannot take away someone’s liberty without a court ruling under the due process clause of the Fifth Amendment. Pardoning Arpaio deprived Latinos in Maricopa County of that right—and undermined the court’s ability to protect individual rights. “[I]f the president can employ the pardon power to circumvent constitutional protections of liberty, there is very little left of the constitutional checks on presidential power,” Redish warned.

If the courts uphold the pardon, they could send the message that people caught up in the Russia investigation can refuse to cooperate with court orders without penalty.

If the status quo stands, critics of the pardon argue, Trump can essentially nullify constitutional rights that conflict with his agenda and immunize officials who carry out his unconstitutional policies. As constitutional scholar Laurence Tribe and civil rights attorney Ron Fein, who participated in a brief opposing the pardon, explained in a Washington Post op-ed, desegregation after Brown v. Board of Education happened because the courts enforced their orders with the threat of contempt against politicians vowing “massive resistance.” If the president had pardoned local officials who refused to desegregate schools, that would have nullified the civil rights of African Americans. Likewise, it’s easy to see the Arpaio pardon as a signal to like-minded law enforcement officials that implementation of the administration’s immigration agenda will come with a pardon for unconstitutional enforcement. As Redish warned in his op-ed, what’s to stop Trump from promising individual officials that he will pardon them if they violate court orders?

On one level, asking the court to reject the president’s pardon is a novel legal maneuver. The courts have rarely put limits on the president’s pardon power, which is understood to be very broad. But on a different level, their argument is simple: that the pardon should be treated like all other constitutional powers, which are limited by the amendments to the Constitution. As Tribe and Fein explained, Congress has the power to tax, but not to tax white people at a different rate from black people (because that would violate the Equal Protection Clause of the 14th Amendment). Similarly, the power to make treaties does not allow the president to make one that ends free speech (in violation of the First Amendment). The pardon power is likewise restricted, they argue, if it infringes on other constitutional protections.

These arguments did not persuade the district court judge in Arizona, who upheld the pardon last year. The judge, Susan Bolton, relied on a 1925 case in which the Supreme Court upheld President Calvin Coolidge’s pardon of a man who was held in contempt of court for selling alcohol in violation of the National Prohibition Act. Redish and the other advocates challenging the pardon believe this precedent does not apply when constitutional rights—rather than a federal statute—are violated. But Bolton also refused Arpaio’s request to expunge his conviction, giving the 9th Circuit Court a chance to review the constitutionality of Trump’s pardon.

Some scholars see a different problem with the Arpaio pardon: It nullified the role of the courts to protect Americans’ civil rights.

Even in the left-leaning 9th Circuit, which Trump has repeatedly attacked for striking down his policies, the case is considered a long shot. “The biggest hurdle to the case is the broad power that the Constitution grants the president to pardon,” says Griffin, who believes the Arpaio pardon will likely be upheld. The Constitution allows the president to pardon “offenses against the United States, except in cases of impeachment.” In other words, it cannot be used for violations of state law or in impeachment cases. In 1866, the Supreme Court ruled that the pardon could also not be used for a crime that has not yet been committed. None of these restrictions pertain to the Arpaio pardon. “Though brazen, it appears to be legal,” Griffin says.

Fein, Aftergut, and Redish argued in a brief to the district court that there is precedent on their side. In 1914, President Woodrow Wilson pardoned a newspaper editor named George Burdick in order to compel him to disclose his sources to a grand jury. Burdick had previously invoked his Fifth Amendment right against self-incrimination, and he declined the pardon, which was intended to circumvent that right. The Supreme Court held that the pardon was void.

The pardon power looms particularly large over the Trump presidency because it’s seen as a possible escape hatch from prosecution by special counsel Robert Mueller. Griffin says of the Arpaio pardon, “I think it’s not unconnected to the president’s ultimate strategy to the investigations against him.” Trump’s pardon in April of Scooter Libby, who was convicted of lying to federal investigators and obstructing justice during another special counsel investigation, amplified this concern. If Arpaio’s pardon is upheld, Trump will feel freer to instruct witnesses not to testify against him and then pardon them when they’re held in contempt of court or perjure themselves. But if the 9th Circuit limits the pardon power, the question will almost certainly head to the Supreme Court for one of its biggest decisions of the past century on the separation of powers.