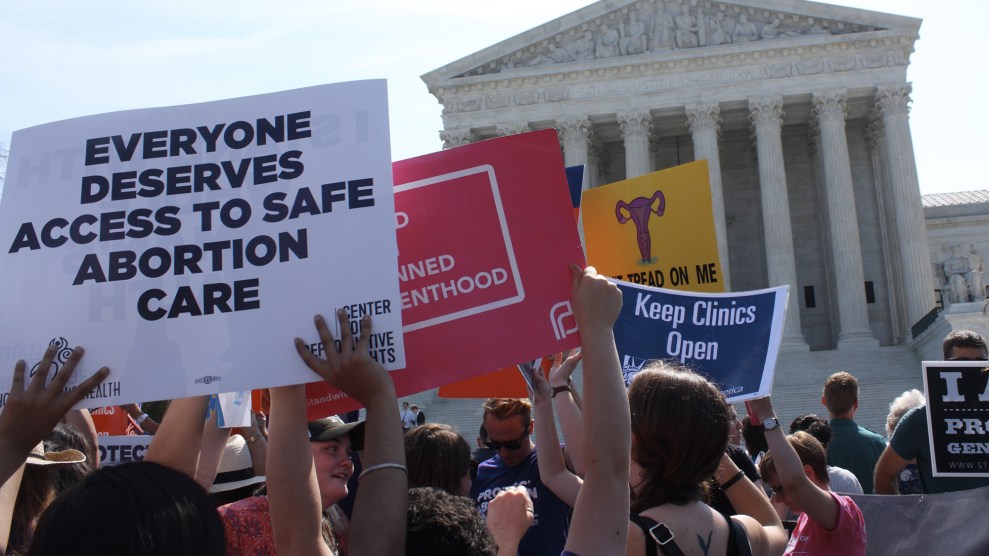 A large crowd on the sidewalk at the steps in front of the Supreme Court Building as the Court's decision on Whole Woman's Health v. Hellerstedt was about to be announced. Evan Golub/ZUMA

Now that Justice Anthony Kennedy has announced his retirement from the Supreme Court, vacating a seat that the Trump administration and conservatives in Congress are excited to fill, the future of abortion rights is in serious jeopardy. While the conservative justice has ruled to uphold abortion restrictions over his career, he has long been a stalwart defender of Roe as a constitutional certainty.

The last time a major abortion rights case was heard before the Supreme Court was in 2016, when Whole Woman’s Health v. Hellerstedt was argued—a suit over two Texas restrictions that required abortion providers to have admitting privileges at nearby hospitals and that clinics have facilities comparable to ambulatory surgical centers. In a 5-3 decision, the Court ruled that the restrictions placed a substantial, undue burden on women who seek abortions, and therefore violate the Constitution, thus striking down the state’s provisions and handing a win to the plaintiff, a Texas organization that runs seven abortion clinics in the state. But with a second seat about to be filled by another Trump-appointee, the balance is changing. And the several states that have been pushing abortion restrictions for years, many of which are now working their way through the lower courts, are undoubtedly eager to test a new justice who almost certainly will not wholly protect Roe.

Just after Wednesday’s retirement news, we called up Elizabeth Nash from the Guttmacher Institute, a think tank that researches reproductive health, to hear what an impending Supreme Court shift could mean for abortion rights in America.

Mother Jones: What was top of mind for you when you heard the news of Justice Kennedy’s retirement?

They were expecting a court case and they welcome that court case, because the anticipation was that the Supreme Court would look very different by the time it made its way up there.

Elizabeth Nash: My immediate thought was it was devastating—with the loss of Kennedy, we’re looking at a much more conservative US Supreme Court, and on abortion rights, specifically, we could be looking at some real rollbacks. We had a 5-3 decision in Whole Woman’s Health, and that decision was incredibly important for so many reasons, including that it pushed back against abortion restrictions generally, not just the two restrictions that were struck down in Texas. And now we have many cases winding their way through the court system, whether they’re on bans on abortions at 15 weeks, such as in Mississippi, or bans on specific methods of abortion in places like Texas and Arkansas and Alabama. With those cases, assuming that they make it to the Supreme Court, there is the opportunity now for the US Supreme Court to take the case and roll back abortion rights—either some abortion rights or all abortion rights. They would have a lot of leeway.

MJ: How do you anticipate anti-abortion state legislators will respond to the likely shift on the Court? Do you think this will embolden them?

EN: I think in a lot of state legislatures, we will see a lot of action around abortion restrictions. There was already action this year in Iowa, where a new law that bans abortion at about six weeks of pregnancy was enacted. Some of the rhetoric around the enactment of that law was not only about banning abortion, but about a challenge to Roe v. Wade. [The authors of the law] were expecting a court case and they welcome that court case, because the anticipation was that the Supreme Court would look very different by the time it made its way up there. And by looking different, I mean being a more conservative court that’s more likely to uphold abortion restrictions.

MJ: What are the most common restrictions you’ve seen come out of state legislatures that signal this approach?

EN: We’ve seen even more extreme legislation in Mississippi’s 15-week ban or Iowa’s six-week ban or bans on some methods of abortion, such as in Kentucky and Texas. But we’re also seeing a shift in the approach that abortion opponents are taking to legislation. One approach had been to say that abortion restrictions are necessary because the state has an interest in protecting the woman’s health. Ever since the decision in Whole Woman’s Health came out, which said those Texas restrictions didn’t do anything to benefit women’s health, we’re now seeing abortion opponents saying the state has an interest in fetal life. They’re making that shift, a distinction so that potentially there could be a way to uphold a restriction, because instead of being predicated on protecting a woman’s health, it’s now about protecting fetal life.

MJ: The shift in language regarding protecting women’s health is interesting, and pretty bold.

EN: Yeah, it’s a way to get around the Whole Woman’s Health decision by taking a different tactic. We’ve also seen some conservative judges preserve abortion restrictions. We saw the Eighth Circuit uphold an abortion restriction in Arkansas that required a provider of medication abortions to have a contract with another provider who has admitting privileges at a hospital. That restriction was upheld, in part because the Eighth Circuit said there wasn’t enough evidence presented that women were going to be harmed in Arkansas. That’s really turning the Whole Woman’s Health decision on its head. [Editor’s note: Justice Stephen Breyer’s Whole Woman’s Health majority opinion points out that the state was unable to prove that its abortion restrictions improved the health of any woman in Texas.] We’re also seeing judges stepping into this debate as well, and the retirement of Justice Kennedy is really adding some fuel to the fire.

Ever since the decision in Whole Woman’s Health came out, which said those Texas restrictions didn’t do anything to benefit women’s health, we’re now seeing abortion opponents saying the state has an interest in fetal life.

MJ: Which states do you think would be most affected by a potential ruling overturning Roe and why?

EN: If we assume that a court case makes it up to the US Supreme Court and they take it, it could result in an overturning of Roe or it could result in an undermining of Roe rather than an outright overturn. That would really exacerbate what we’re seeing already. We already know that abortion access and rights are incredibly limited in some states in the country—look at the South. In some states, there’s only one abortion clinic, and there are all kinds of restrictions on abortion. States like Texas and Mississippi, Louisiana, Arkansas, all come to mind. States like North and South Dakota come to mind as places where it’s very difficult to access abortion already. In some places, like the Northeast and the West Coast, the laws are much more supportive for abortion rights. But if abortion rights are undermined or overturned in a court decision, we would see states have more leeway in adopting abortion restrictions. So the differences between states would be much more exacerbated, with some states taking it to the limit and enacting as many restrictions as they could and some states protecting access.

MJ: Talk to me a little bit about how trigger laws factor into all of this.

EN: So there are four states that have enacted what are known as “trigger laws.” These laws are essentially abortion bans with a delayed effective date—the effective date being when Roe v Wade is overturned. So in these four states— Louisiana, Mississippi, North Dakota, and South Dakota—abortions would be banned if Roe v. Wade were to be overturned. We then have another subset of laws that have pre-Roe abortion bans on the books, which are abortion bans that were enacted before 1973 and were never repealed after Roe v. Wade. That’s in 10 states, and those states vary from places like Alabama to Massachusetts. Whether or not pre-Roe abortion bans could go into effect would depend on a lot of what is already going on in the state, like the legislators there and how hostile or supportive it is of abortion rights. It also depends on the makeup of the executive branch, including the governor and attorney general.

MJ: Is there any particular legislation that you think will be considered by the Supreme Court in the near future?

EN: There are a number of cases in the pipeline. There are two cases around abortion method bans that are further along than some other cases—a case in Texas, which has been appealed to the Fifth Circuit, and the case in Alabama that was heard before the 11th Circuit in May. Both of these cases would ban a method that’s typically used in the second trimester [known as the dilation and evacuation procedure]. If those bans were to go into effect, it could make it really hard to access abortions after 14 or 15 weeks. So having a successful challenge to these laws is incredibly important to maintain access at that point of pregnancy. Those two cases are the furthest along, so they’re the next that we could potentially see appealed up to the Supreme Court.

MJ: What else is on your mind right now?

EN: There are a lot of attacks on reproductive health and rights, not only at the state level, that have been ongoing for so many years, but we also are seeing so many attacks from the federal side—the attacks on Title X or attacks on insurance coverage or now this looming new potential makeup at the US Supreme Court.