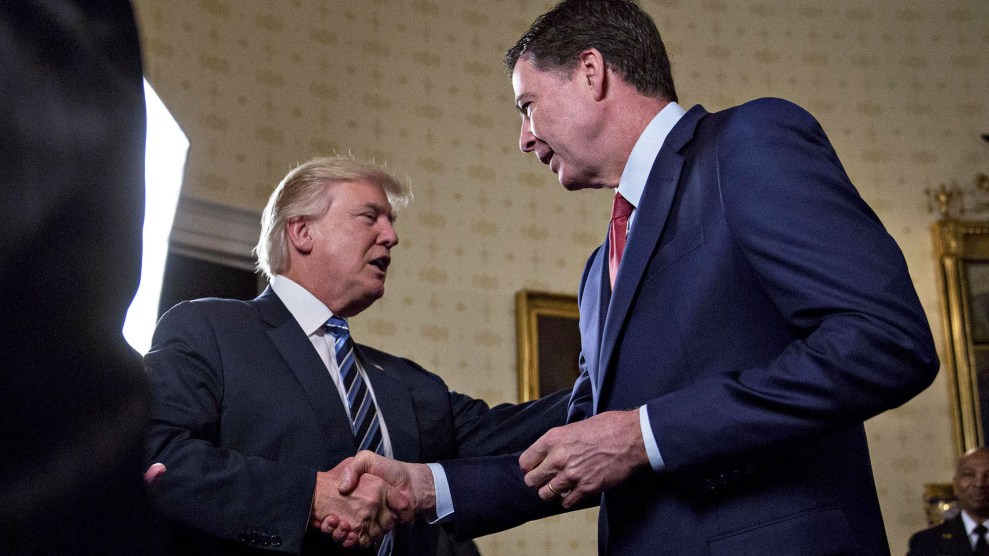 Even before the Justice Department inspector general’s report on former FBI director James Comey was released on Thursday afternoon, Donald Trump initiated the inevitable tweet storm, hoping to use this development as yet another distraction from the Trump-Russia scandal.

The Comey report, issued by Inspector General Michael Horowitz, examined Comey’s handling of the FBI’s Hillary Clinton email investigation and reached an obvious conclusion: Comey deviated from Justice Department and FBI procedures by publicly announcing his recommendation in July 2016 that she not be prosecuted (while still criticizing her for how she handled her email at the State Department) and by informing Congress shortly before the election that the investigation was being revived. The IG noted, “While we did not find that these decisions were the result of political bias on Comey’s part, we nevertheless concluded that by departing so clearly and dramatically from FBI and department norms, the decisions negatively impacted the perception of the FBI and the Department as fair administrators of justice.”

In other words, the IG report confirmed reality. After all, Comey acknowledges he didn’t stick to Justice Department S.O.P.—he, of course, has defended these fateful decisions—and anyone who remembers those two episodes know that partisans excoriated Comey for acting in a political manner. (Democrats slammed him for taking the unprecedented step of harshly chastising a target not being indicted and for hastily notifying GOP leaders on Capitol Hill of a revived inquiry that produced nothing new. Republicans blamed him for, essentially, not locking her up.)

The report found that the FBI’s and Justice Department’s conclusions that the Clinton email case did not warrant prosecution were indeed legitimate. But the IG did harshly rebuke Comey for flouting Justice Department rules and for making a “serious error of judgment” when he notified Congress on his own that the bureau was reopening the Clinton email investigation. The report said it was “extraordinary that Comey assessed that it was best” for him not to speak with the attorney general or her deputy about his decision. The IG called his decision to hold that July press conference on the Clinton case without consulting with the attorney general “insubordinate.” The report pounds Comey for placing himself above the rules and assuming authority he did not possess.

Ahead of the official release of the report, Trump began tweeting out his usual denunciation of the Trump-Russia investigation headed by special counsel Robert Mueller, who inherited the probe after Trump fired Comey. Trump insisted yet again that it was a “witch hunt” and that there was “No Collusion and No Obstruction of the fabricated No Crime.”

Now that I am back from Singapore, where we had a great result with respect to North Korea, the thought process must sadly go back to the Witch Hunt, always remembering that there was No Collusion and No Obstruction of the fabricated No Crime.

He also claimed that Comey had been part of a Democratic conspiracy to set up a “Special Councel” (sic) to create a phony scandal and “Fake News.”

So, the Democrats make up a phony crime, Collusion with the Russians, pay a fortune to make the crime sound real, illegally leak (Comey) classified information so that a Special Councel will be appointed, and then Collude to make this pile of garbage take on life in Fake News!

The IG report on Comey and the Clinton email probe has little to do with the origins of the Trump-Russia investigation, which the FBI, under Comey, initiated in July 2016, several weeks after Comey announced the (apparent) conclusion of the Clinton email probe. But Trump is no stickler for facts and logic. His strategy since becoming president has been to discredit the FBI and the Justice Department—basically, the entire federal law enforcement system—in order to thwart two agencies that could pose a challenge to him and his crew. If the IG report makes Comey and the FBI look bad, then Trump wants to use it to taint the Russia investigation, which began under Comey. Bad Comey, bad investigation. Trump did the same thing when he went after Andrew McCabe, the number two at the FBI who was cited in an earlier IG report for not telling the truth during a leak investigation unconnected to the Russia probe.

Conservatives immediately jumped on a portion of Thursday’s report disclosing that FBI agent Peter Strzok, who worked on both the Clinton case and the Russia probe, texted a bureau lawyer in August 2016  that “we’ll stop” Trump from reaching the White House. The report criticized Strzok for creating “the appearance that investigative decisions were impacted by bias or improper considerations.” But it concluded, “Our review did not find documentary or testimonial evidence directly connecting the political views these employees expressed in their text messages and instant messages to the specific investigation decisions we reviewed.” Still, this text will become part of the Trumpian right-wing case against the Russia investigation—despite the fact that the FBI did nothing to impede Trump’s election, while Comey’s last-minute revival of the Clinton inquiry was a significant blow to her campaign.

For months, Trump has been widening his assault beyond the FBI and the two men who led the bureau when it opened its counterintelligence investigation of interactions between Trump associates and Russians. In pardoning Scooter Libby, Joe Arpaio, and Dinesh D’Souza, Trump sent the message that federal prosecutors cannot be trusted—they are overly vindictive and overly political. Now why might Trump want voters to adopt such a view?

Trump has been trying to portray himself as a victim of devious and dishonest plotters and attempting to dodge his proven guilt in the Trump-Russia scandal. He keeps insisting that the investigation of collusion between himself and Moscow and any subsequent obstruction of justice he may have committed (by firing Comey, dictating a false statement about the infamous Trump Tower meeting, and other actions) is a diabolical scheme underhandedly orchestrated by the Democrats and the Deep State to falsify a case against him.

Trump refuses to acknowledge that he and his gang have already been caught engaging in wrongdoing. That includes not only the indictments and plea agreements Mueller has obtained, but also what’s in the public record: The Trump camp did try to collude with what it was told was a Kremlin plot to help Trump by sharing dirt on Clinton with his campaign; the Trump campaign attempted to set up a back-channel with Vladimir Putin’s office while he was waging information warfare against the 2016 election; and Trump and his aides during the campaign publicly denied any Russian attack was under way, consequently providing cover for a foreign adversary assaulting the United States. This is all incontrovertible.

Trump’s attacks on Comey, McCabe, the FBI, the intelligence community, Democrats, the Steele dossier—it’s all designed to delegitimize one of the most important investigations in the FBI’s history and to draw attention away from the sins he and his campaign committed, whether they were crimes or not. There is much to debate regarding Comey’s actions in the Clinton email case. But those decisions had nothing to do with the launching of an investigation of Putin’s war on the election and the contacts between Trump associates and Russia. Trump’s exploitation of the IG report is merely a matter of Trump yet again obstructing reality.