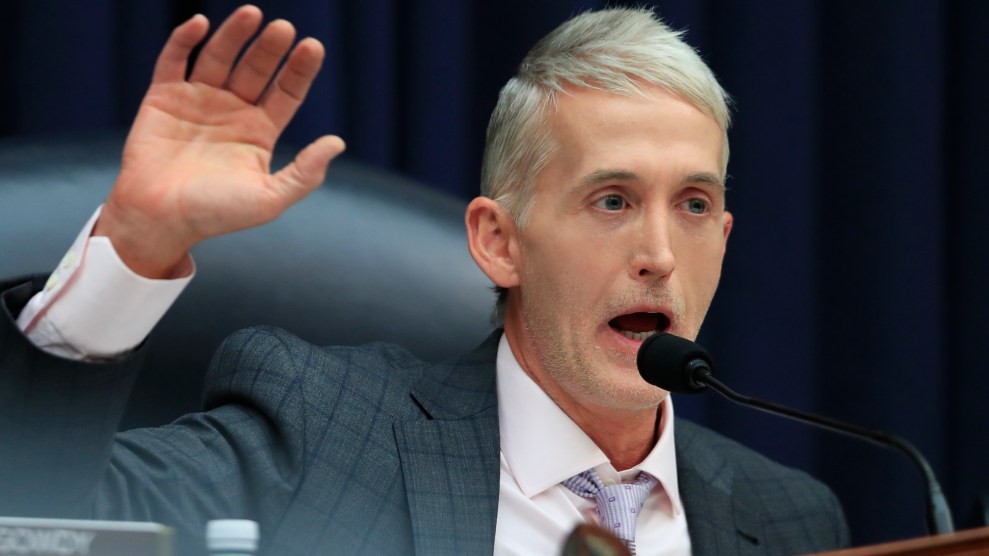 There is perhaps no one person more responsible for some of Congress’ most embarrassing public spectacles over the past three years than Rep. Trey Gowdy (R-SC).

Gowdy was the chairman of the House Select Committee on Benghazi, the congressional body that spent two years and nearly $8 million trying to torpedo the presidential candidacy of Hillary Clinton through an endless, and not especially fruitful, investigation of the 2012 deaths of four Americans in an attack at the diplomatic outpost in Libya. His committee’s investigation included at least 11 hours of public testimony from Clinton herself, a marathon hearing that featured members of Congress shouting over each other but which ultimately produced no damning evidence of wrongdoing.

As chairman of the House Oversight and Government Reform Committee, Gowdy also oversaw this week’s 10-hour grilling of FBI agent Peter Strzok about his role in the Russia investigation and whether text messages to his mistress, Lisa Page, reflected anti-Trump animus that hopelessly compromised the investigation. Both hearings have become the butt of numerous late-night TV jokes. Both could have been reined in by Gowdy, the committee chairman.

But Sunday on “Face the Nation,” as if he had no control over such things, Gowdy seemed to agree with TV comics and Democrats alike when he said that public hearings are “a freak show” and “a circus”—and that doesn’t like to hold them.

Rep. @TGowdySC on the House hearings with Peter Strzok and Lisa Page: Well, our private hearing was much more constructive than the public hearing. Public hearings are a circus. That’s why I don’t like to do them. I mean, it’s a freak show. pic.twitter.com/WHXXEok0jZ

In the same interview, Gowdy also weighed in on President Donald Trump’s upcoming summit meeting Monday with Russian President Vladimar Putin. In light of Friday’s indictment of 12 more Russians accused of interfering with the 2016 presidential election, Gowdy suggested that Trump should ask Putin to extradite all of those who have been indicted in the hacking investigation—a total of 25 thus far. “Your first request of Vladimir Putin needs to be, ‘Tell us which airport we can pick up the 25 Russians that tried to interfere with the fundamentals of our democracy,'” Gowdy said of Trump.

The idea of asking Putin to turn over the culprits responsible for hacking the 2016 election does not seem to have occurred to Trump, who was also interviewed by CBS News in a segment aired Sunday. CBS asked Trump whether he would ask Putin to extradite the indicted Russians when he meets with the Russian president in Helsinki on Monday. “I hadn’t thought of that,” Trump said. “But I certainly, I’ll be asking about it. But again, this was during the Obama administration. They were doing whatever it was during the Obama administration.”

Trump didn’t seem to have much hope that his meeting with Putin would accomplish much. He told CBS, “I’m not going with high expectations.”