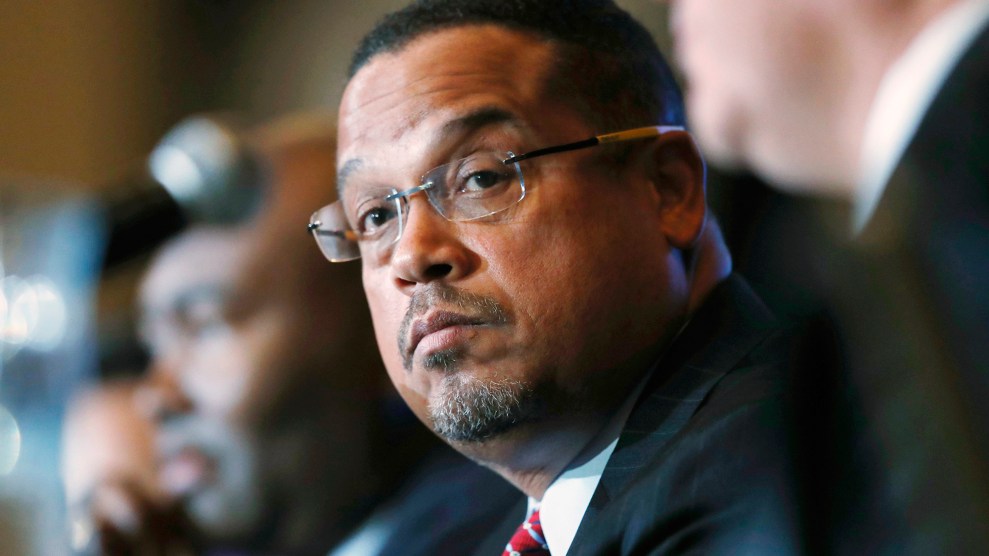 In the run-up to Minnesota’s primary election on Tuesday, Democratic US Rep. Keith Ellison, who is vying to become the state’s next attorney general, is denying recent allegations of domestic abuse from an ex-girlfriend and her son.

Karen Monahan, a political organizer who dated Ellison until 2016, confirmed via Twitter that her relationship with Ellison was abusive, after her son wrote on Facebook Saturday that he had watched a video that showed Ellison dragging her off a bed, screaming profanities at her. Her son added that he had seen hundreds of angry text messages sent from Ellison to Monahan, including some that were threatening.

On Sunday, Ellison, who is also the deputy chair of the Democratic Party, disputed the allegations. “Karen and I were in a long-term relationship which ended in 2016, and I still care deeply for her well-being,” the six-term congressman said in a statement. “This video does not exist because I have never behaved in this way, and any characterization otherwise is false.”

A campaign spokesman also denied that Ellison had sent threatening text messages. According to an investigation by Minnesota Public Radio News, the congressman did exchange some angry messages with Monahan during the months after the breakup, though none of the messages reviewed by the reporters showed evidence of physical abuse. In one message, Monahan said she would write about their “journey,” prompting Ellison to reply that doing so would be a “horrible attack” on his privacy.

In recent weeks, Monahan, an organizer with Sierra Club, has tweeted about the #MeToo movement and her experience in an abusive relationship, but she did not name Ellison directly. Her son Austin Aslim Monahan told the Star Tribune this weekend that he did not currently have a copy of the video, which he says he watched on his mom’s computer in 2017. “I only know what I saw and I know what’s true,” he said. “It was my job to stand up for my mother.”

Ellison’s ex-wife, Kim Ellison, came to the congressman’s defense after the allegations surfaced. “I want members of our community to know that the behavior described does not match the character of the Keith I know,” she said in a statement.

In Tuesday’s primary, Ellison is up against five opponents for state attorney general. He has been favored to win because of his name recognition and his fundraising advantage, with support from progressives like Vermont Sen. Bernie Sanders. State Rep. Debra Hilstrom, another Democratic candidate in the race, called the allegation of physical abuse “troubling,” while candidate Tom Foley, a former county attorney, urged law enforcement to immediately investigate the matter.